The internet is a chaotic place, but it is nonetheless ruled by a series of iron laws, especially when it comes to what we put on it. Perhaps the most important one is that whatever you post, try to make it visual. Once that’s established it’s about what sort of image will best hoover up those likes and shares and retweets. Well, that’s down to where you are and who your audience is. But as a rule of thumb there are two things that generally never fail: blondes and guns.

Over the past few days, the very brave and very blonde Ukrainian MP Kira Rudik has been tweeting various pictures of herself posing with an AK47. She began last Friday:

I learn to use #Kalashnikov and prepare to bear arms. It sounds surreal as just a few days ago it would never come to my mind. Our #women will protect our soil the same way as our #men. Go #Ukraine!

What is striking about the photos is not that Rudik posted them: she is a people’s representative in a time of war — it’s exactly the sort of thing she should be posting. What’s so interesting, and smart, is how she did it. Rudik does not pose in a uniform, or even in camouflage fatigues. She does not salute or lift the AK triumphantly; in fact, the way she holds it makes it clear that she’s not used to holding a weapon of any sort. The photo is taken not in a base or even in an office, but clearly in the living room of her home, just by a window that looks out onto a small patio.

The final touch though — and it’s a genius one — is that she doesn’t have shoes on; instead she stands barefoot, her toes painted a delicate pink.

In one sense, this all seems irretrievably amateurish — but that’s the point. Of the many things the internet craves, authenticity is sacrosanct. And this is a model of the genre. The tweet is designed to do two things: first, to show that Ukrainians will stand and fight for their homeland; and second, to humanise those whom we are told will be doing the fighting. And it does this by showing them to be the most ordinary of people; people standing in their bare feet, vulnerable and ordinary — just like civilians across the world. As such, they stand in total contrast to the stormtroopers invading their lands. It’s pink toenails versus mud-encrusted jackboots; smiling mothers versus bearded Chechens — all shorthand for the battle playing out between Ukraine and Russia.

It’s taken us a long time to get here. It was mid-2014, when I was in occupied eastern Ukraine, that I first realised that 21st-century warfare had finally come to the 21st century. Both the Afghanistan and Iraq wars may have been already fought, but they were, in their peak, largely 20th-century conflicts, fought out before the arrival of social media and the advent of the user-generated content Web 2.0. Back then, Russia was the only social media player in the conflict. The Ukrainians were outgunned on the ground and online. Back then, in the occupied east people told me that Kyiv was run by Nazis and hated everything Russian. Back then, I watched the Kremlin flood social media and Russian-language TV with endless narratives about Kyiv’s desire to kill Russian speakers. Back then, the Ukrainians offered little by way of response.

But boy have they learned. Yesterday, I spoke to Peter Lerner, former Head of the Israel Defence Force (IDF) social media unit, who headed up its online operations during 2014’s Operation Protective Edge. He was in no doubt as to who is winning this info battle. “The game plan from the beginning has been two languages: English and Ukrainian and to a lesser volume Russian for PsyOps needs,” he told me. “Their comms goal appears to be rallying international and public support. All of their official accounts are synchronised — the same messages, nuanced and amplifying each other. ‘#Ukraine’ has been the number one trending hashtag since Thursday.” He continued: “And beyond the odd sporadic effort, there is very little social media personification beyond the president.”

Ukrainian president Volodymyr Zelenskyy has become vital to Ukraine’s war effort on the ground and the star of its online battle. In a powerful 33-second video clip, filmed last week as he stood in a central Kyiv Street flanked by four other politicians, he announced he was not going anywhere. The clip was striking as an address from a state leader. It was unadorned by formality or rhetorical flourish, and it was designed to paint Zelenskyy as two things simultaneously: leader of his nation and (literal) man in the street.

Now contrast these images to those relentlessly broadcast of his enemy, Vladimir Putin, who sits far from the frontline, and therefore from danger, isolated not only from the battlefield but from those around him. Like a proper supervillain he sits alone, insistent on keeping everyone at least ten feet away from him. It’s Ukraine’s very own Jewish James Bond versus an ageing Blofeld with anger management issues and a Botox habit. There’s only ever going to be one winner in the popular imagination — and the court of Twitter.

This is the new grammar of statesmanship for the social media age and it’s about being brief, edgy and demotic. Our public sphere is curated by Big Tech platforms that are algorithmically geared toward virality; and what goes viral are not long speeches about having a dream or fighting people on beaches but short and arresting words and images. Gone are the lofty phrases and verbal curlicues; gone are the digressions on policy. What you say needs to work on a short YouTube or Instagram or Twitter clip — and it will ideally be easily remembered. 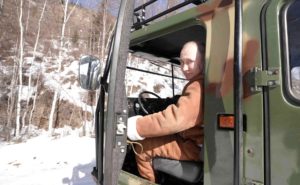 This, then, is the central battle playing out. Lerner is shocked at how bad the Russian response has been. “This is all very strange,” he continues, “just like their perceived lack of battlefield accomplishments.” Lerner wonders if there is a rift in the government between Putin and those around him more reluctant to go to war, pointing to the recent fraught exchange between Putin and his head of intelligence who urges him to give Russia’s “Western partners” one more chance.

In the meantime, Russian State channel RT posts away as if in a different reality. “Video sequence of the development of Russia’s offensive in all directions in accordance with the operation plan,” it tweeted, with footage of armoured vehicles moving bovinely across dirt tracks and over bridges. Of the actual realities of the war on the ground: not a trace.

It may well be, as Lerner speculates, that the Kremlin knows that the world doesn’t accept its case for war and sees little point in trying to push it. If so, the focus will now be on internal comms and shoring up Russian support. But one of the first things Lerner told me years ago when we first met was this: if you leave a void in online information wars, you cede it to the enemy. Russia has done exactly that — and Ukraine is reaping the rewards.

And it’s reaping them globally. I can’t think of a single country in the world with Ukraine’s soft power right now. Even Elon Musk got involved after Ukraine’s Minister of Digital Transformation Mykhailo Fedorov urged him to support the country with his Starlink services, which not only provide higher internet speeds but, as internet delivered by satellite, would continue to provide coverage even were the Russians to cut off cables in Ukraine. “While you try to colonise Mars — Russia try to occupy Ukraine! While your rockets successfully land from space — Russian rockets attack Ukrainian civil people! We ask you to provide Ukraine with Starlink stations,” Fedorov tweeted at Musk. Ten hours later Musk replied. “Starlink service is now active in Ukraine… more terminals en route.”

In the background, the same narratives and counter-narratives that I have been studying for five years continue to dominate. Last week, when hostilities broke out, a video went viral. It carried a purported audio exchange as a Russian boat approached Snake Island on the Ukrainian coast and demanded the soldiers stationed there to surrender. “This is a Russian military warship. I suggest you lay down your weapons and surrender to avoid bloodshed and needless casualties. Otherwise, you will be bombed.” the Russian officer says. A Ukrainian soldier responds: “Russian warship, go fuck yourself.” Those were the final words heard from the island. Zelenskyy later announced that the warship had then killed all 13 Ukrainian defenders. The internet trilled with talk of the brave Ukrainian martyrs. Now, however, it appears the soldiers are in fact alive and being held prisoner by the Russians.

Honest mistake or Ukrainian influence operation? If it were the latter, it worked: Snake Island galvanised Ukraine’s online army and cowed Russia’s. Perhaps the truth will come out, but then again maybe it won’t. Either way, it reordered reality online for a while, which was the point. It was another Ukrainian victory.

This is the nature of modern conflict, and it’s the way that all wars will be fought now — on the ground and online. The revolution may not be televised, but it will be meme’d.