Every war has a photograph that captures its horrors. Vietnam had Napalm Girl; Spain had The Falling Soldier. How will the war in Ukraine be remembered? Thanks to Vladimir Putin’s ruthlessness, an image of a heavily pregnant woman being stretchered in the rubble of a maternity hospital in Mariupol, injured and bleeding, is likely to be etched into the minds of future generations. Both mother and newborn are now dead.

Today marks three weeks since Putin launched his invasion and already thousands have been killed — perhaps significantly more, if the latest estimates from Mariupol are to be believed. There are mass graves, bodies strewn in the streets, desperate attempts to survive by melting snow for drinking water.

We have all marvelled at the Ukrainians’ bravery as they fight to defend their country and people. But the price of their heroism has been terrible suffering. Right now, the United States and its Nato allies are focused on targeting the Russian economy with sanctions, as well as sending weapons and other forms of military aid into Ukraine. Both efforts must continue. But there is also a dire need to help civilians no longer in the country — those who have decided to flee the daily barrage of missiles, bombs and bullets.

This week, the UN estimated that more than 2.8 million people have now escaped. With Ukrainian men aged between 18 and 60 required to remain and help with the war effort, most leaving are women, children, and the frail, running from the relentless shelling of their cities and villages. More are expected to leave in the coming weeks: the UN’s High Commission for Refugees has estimated that 12 million people still inside Ukraine will need help.

European countries have already taken moderate steps to accept refugees. The Schengen zone has dropped visa requirements, requiring only a biometric passport to enter. The EU has granted the right to stay and work in the EU for up to three years. But more needs to be done.

First, the West can prove its continued support of Ukraine by conducting a large-scale humanitarian airlift to save those trapped in encircled cities such as Mariupol and Kharkiv, or captured ones such as Kherson. Getting them out and to a safe country should be the top priority. We attempted this in Afghanistan last year; there’s no reason we shouldn’t do the same now. Once these people have left, we need to ensure they can reach host countries across Europe, especially the wealthier northern European countries. For years, the European Union has constantly spoken of the importance of “burden sharing”. Now is the time for it to demonstrate it knows what the term means. As things stand, the burden on Poland — there are 1.8 million refugees there — is too great. This is a crisis for all Europe, and should be treated as such.

In 1992, after fleeing a forced marriage in Somalia, I spent 11 months living in an asylum-seeker centre in Lunteren, the Netherlands, with individuals from around the world. One group in particular stood out: those from the former Yugoslavia. Given the proximity of the conflict to the European Union, those running from the Balkan states were bussed into the centre from the border. I cannot recall another refugee group being treated this way, but it sets a clear precedent that asylum seekers escaping a European conflict should be provided with transport to reach safety.

Once there, Ukrainians deserve protection and accommodation. Those who fled in the first weeks of the conflict often had friends in foreign countries who provided them with housing. But as the scale of evacuees continue to rise, that is no longer the case. People today are desperate: a family may have a suitcase between them, but no plan for what comes next. This is where European governments need to step in.

And so far, they are failing. This week, the British government announced its Homes for Ukraine scheme, which will pay volunteers £350 a month tax-free for opening their homes to those fleeing the conflict. The response was undeniably heartening: more than 100,000 people signed up in the first day. But even with the best of intentions, such enthusiasm can’t hide the fact that the proposal is nothing more than a gimmick, designed to fill headlines rather than remedy the largest refugee crisis in Europe since the Second World War.

Ukrainians don’t need shelter, safety and accommodation next week, or the week after. They need it today. Every European country should be expediting this process. With the recent passage of the European Commission’s “Cohesion Action for Refugees in Europe” proposal, which allocates €10 billion humanitarian aid for Ukrainians, there is no reason we can’t immediately guarantee accommodation for those fleeing. 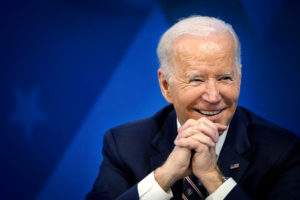 If we don’t, in the coming weeks they could be forced to substitute one type of inhumane barbarity for another. Already there are reports of trafficking gangs waiting near the border for young women and children. One man has been detained in Poland, suspected of raping a 19-year-old refugee he had ensnared with an offer of shelter. Another was heard attempting to lure in a 16-year-old girl before authorities intervened. In the UK, meanwhile, the National Crime Agency estimates that there are at least 6,000 modern slavery offenders in the country. “We can be certain that some of this number will be seeing the Homes for Ukraine scheme as an opportunity to turn a profit,” one expert has warned.

This must not be allowed to happen. Young Ukrainian women must not end up in red-light districts across Europe because they fled their homes and fell into the wrong hands. Nato and the EU may not deem it appropriate to support the Ukrainians with a no-fly zone — but surely we can protect them from being further dehumanised by opportunistic criminal syndicates. It is the least we owe them.

And then there is the need for a long-term plan. It is all very well offering citizens a wad of cash to take in refugees, but what comes next? For those entering Europe, the sooner we reintroduce them to a normal life the better. Asylum-seeker centres are often like human holding pens — they provide food, shelter and basic healthcare. But, as I discovered in the Netherlands, life as a refugee is a waiting game. Typically, refugees spend their days waiting for paperwork to be approved, waiting to be allowed to go to school, or waiting to be allowed to work.

It is cruel and dispiriting to keep any human in this condition of uncertainty — and especially so with the people fleeing Putin’s bombs. Once the Ukrainians arrive, we need to rush them into language and skill-building classes immediately. We need to help them find jobs and put their children in schools. This is the only way they will be able cope with the mental and emotional trauma that is the aftermath of the war. How Ukrainian women will suffer

But we must also start planning for their repatriation, closely tied to the swift rebuilding of Ukraine. After all, most of the refugees will want to return to their homes, if they can, as soon as possible. With the mass destruction of cities and towns, significant investments — nothing less than a new Marshall Plan — will be needed to rebuild the country.

Since the fall of the Soviet Union, the West has failed Ukraine time and again. They were persuaded, in 1994, to give up their nuclear weapons in the Budapest Memorandum on Security Assurances. They’ve been strung along for years with the promise of joining Nato and the EU. And they were left to fend for themselves when Putin started to amass tanks on their doorstep.

The only moral course for the West now is to stop making hollow promises — and to start supporting the refugees. Perhaps it is too late to save their country, but it is not too late to save them. Every day the invasion continues, Ukraine shows the West the cost of freedom and the courage needed to take on tyrants. It’s now our turn to step up and start bearing some of that cost.