Only two weeks into Vladimir Putin’s attack on Ukraine and we are already at the relentless killing of civilians stage. So far, 34 hospitals, 202 schools, and more than 1,500 residential buildings have been destroyed. Around two million people have fled to Eastern Europe — mostly women, children and the elderly. At least 500 civilians are dead, with hundreds more injured, and thousands hiding in underground bunkers because Russian forces fire indiscriminately, even — or perhaps especially — in the so-called “humanitarian corridors”. Each day crimes against humanity unspool across our feeds.

It is thought that 600,000 people have fled Kharkiv, Ukraine’s second largest city (population 1.4 million). Mariupol no longer has enough electricity, water, food or medicine for its population of less than half a million. Children are dying of dehydration. Russia has bombed the largest nuclear reactor in Europe and now controls a further two power plants. Two days ago, Chernobyl was shut off from the grid and, with that, the IAEA monitoring systems. The spectre of nuclear disaster hovers.

The Ukrainian Armed Forces and Civilian Territorial Defense have fought with immense courage and skill to defend their homeland. Putin thought Ukrainians would welcome his invaders with cheers. He thought he’d be sitting in Kyiv after 72 hours. He was wrong. So now comes the “scorched earth” strategy. Just as they did in Chechnya and Syria, Russian forces are destroying everything in their path, with no regard for human life. Unless something changes, Kyiv will become the next Aleppo.

Can the West save Ukraine? Make no mistake: we are helping. Putin is paying a military cost he didn’t expect largely thanks to the bravery of Ukrainians, but it’s bravery made possible by the incessant flow of military equipment and training from Europe and the US and, perhaps above all, the UK. But the Russian convoys rumble inexorably on. Ukrainians continue to die. More is needed. The question is: what? “I think we have been too slow and too selective,” says Natalie Jaresko, who served as Ukraine’s Minister of Finance from 2014-2016, soon after Russia first invaded, and who was responsible for renegotiating Ukraine’s debt following the Maidan Revolution. “People in Ukraine are dying… More sanctions need to be rolled out with immediate effect.” And they must be broadly applied to both state-owned entities and political leaders — in Belarus as well as Russia.

“They must also comprehensively target Russia’s economic elite and their families,” she continues. “A good place to start would be the top 100 richest Russians as ranked by Forbes. We must put as much pressure as possible on Russia’s elite to force Putin to end this unprovoked slaughter of Ukrainians.”

The West’s financial sanctions are biting. The Central Bank of Russia (CBR) has already lost access to around two thirds of its reserves, so it’s having a hard time defending the rapidly devaluing ruble. Russians can no longer access hard currency as a result. The removal of certain Russian institutions from the SWIFT payments systems, and the exit of American Express, Mastercard and Visa from the country, are also pummelling the Russian banking system. But Putin continues, nonetheless.

More needs to be done, says Jaresko. We could delist all Russian public entities from our stock markets,  We could divest public pension funds from Russia. We could require all publicly-listed companies to report on any Russia-related activity. “We need to sanction all state-owned banks, not select banks, immediately; and we need to exclude all Russian banks from the SWIFT system”, she tells me. Jaresko speaks of hammering Putin financially, but there’s more than one way to pile on the pressure. Yuriy Vitrenko, Ukraine’s former Minister of Energy and the CEO of Naftogaz, Ukraine’s state gas supplier, sees energy as the way to squeeze Russia. When I call him, I’m told he’s in “a bunker somewhere in Kyiv with a Kalashnikov nearby”. Perhaps not meant to be taken absolutely literally, the comment points to a wider truth: Ukraine’s entire governing infrastructure is now more or less underground.

“We are in charge on securing the supply of gas to Ukraine,” he tells me. “Probably 90% of Ukraine households use it for heating, and we still have minus temperatures at night. If there’s no gas, then it’s a national tragedy. The Russians are deliberately targeting coal supplies and of course they are attacking nuclear power plants — there’s lot of pressure on the energy system.”

But Vitrenko understands that Putin, too, is vulnerable when it comes to energy. Russia is a malignant petrostate that doles out gas to a gasping Europe. This is both its major strength, and a weakness. If you can hit Russia here, you hit it hard.

Vitrenko wants concrete steps to be taken. The first is to set up a mechanism by which money from the sale of oil and gas is put into a dedicated escrow account accessible to the Kremlin only when it withdraws from Ukraine. It’s a system used in dealings with Iran, and Vitrenko believes that Moscow is now more of a rogue state than Tehran. 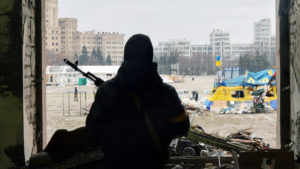 Is this Ukraine’s last chance for peace?

But this is not enough. In the medium term, he says, the West needs to do everything it can to halt its reliance on Russian gas and oil. “The US will have to up its output as well as Norway, while Europe needs to start switching to biogas,” he says. Critically, he also wants to see a temporary switch to coal until “we get rid of our dependency or get additional volumes of gas that are not from countries invading other countries”.

I point out that there might be criticism of the environmental impact of reverting to coal. “Trust me, the environmental damage of war is far greater than that of coal,” he says. “But we need to understand that the dependence problem we have is not just about being dependent on fossils fuels but also on Rogue regimes.”

Vitrenko recognises that the initial reaction from the West has been strong, and that it surprised the Kremlin, but he also emphasises that it must last. “It is important that western leaders show that they will not backtrack”, he tells me. “We need to change the calculus of Putin and those around him. It’s clear that they expected a softer reaction from the West, but unless it’s maintained they will be able to find ways around it.” Svitlana Zalishchuk, a former MP who now works with Vitrenko, is equally blunt. “Putin is not going to stop,” she says. “He is trapped by his own bad decision-making, if he loses the war in Ukraine, he’s dead politically — he won’t be the president of Russia anymore. He’ll continue so we must, too.

“It’s true people are always afraid of escalation, about starting World War III, but it has already started… We allowed his disinformation, his election interference, his killing of own opposition, the imprisonment of Navalny. We didn’t respond to any of that that which is why invasion came. But now we’re still afraid of escalation.”

Her words shame the West. In 2001 and 2003, we promised to liberate Iraqis and Afghans from tyranny and instead eventually abandoned them to it. In 1994, under the Budapest Memorandum, we promised Ukraine that if it gave up the nuclear weapons on its territory after the fall of the USSR, we would guarantee that it didn’t face aggression from the UK, the US or, critically, Russia. But when Russian troops marched into Crimea and then eastern Ukraine, we looked away. We did nothing.

Betrayal, in the movies, is crystal clear. But in reality, few of us are Benedict Arnold or Kim Philby or Ephialtes. We tend to betray not in black and white but in a thousand shades of grey. The averted gaze, the shuffle across the street, the decision to ignore what is plain to all.

This is what we have done to Ukraine and to so many allies over the last 20 years. Right now, the Kremlin is suffering, but it will calculate that in a month or two — when the news cycle has moved on — things may be different. Will bank accounts quietly reopen, along with the Moscow branches of Zara and McDonald’s? We need people to buy our overpriced houses, and pay our libel lawyers and fork out for our school fees.

But we cannot allow it to happen again. If not for Ukraine’s sake, then for ours. As Jaresko concludes, “Ukraine’s survival is the world’s only guarantee that this conflict does not expand into Europe and the wider world. The actions we take now will be worth any short-term cost. Global peace and freedom are at stake.”