Of the 1,000 people who gave up their Saturdays to protest in London’s Square Mile, it was a middle-aged couple who stood out the most. They wore matching grey sweaters emblazoned with the words “STOP CHILD TRAFFICKING”.

Held on 17 September outside the Bank of England, the demonstration was pithily titled the “Nationwide Rally for Freedom: For Truth, Justice & Freedom”, and featured speeches by Piers Corbyn and David Icke. It was, notionally at least, against Covid jabs — but some attendees had their own agendas.

The couple introduced themselves as Lee and Morag, and explained the message behind their jumpers. It refers to Satanic Ritual Abuse, and it imagines that devil-worshipping paedophiles operate a trafficking network that kidnaps tens of thousands of children every year in order to ritualistically rape, torture and murder them.

It goes, of course, all the way to the top. Believers in the various iterations of SRA think that the court system has been paid-off to separate children from their parents, and that these kids are smuggled to remote country estates via vast underground tunnels so that senior figures in the British establishment can dismember them in grotesque rituals. “It’s going on, 100%,” said Lee.

Later in the rally, I found Piers Corbyn marching alone, shouting a protest chant through his megaphone. I asked him what he thought about SRA. “It’s real,” he said. “It’s happening. We ought to press on talking about it.”

SRA is the conspiracy theory that refuses to die. An American import, it arrived here in the Eighties and Nineties, and became accepted in some circles as gospel truth. The NSPCC even gave a press conference in 1990 alleging that mothers were handing over their newborn babies to be sacrificed in occult rituals. Therapists, social workers, and writers began spreading sensational claims: children being hung upside-down by hooks so their organs could be cut out; women having their foetuses aborted, carved up and eaten. It’s hard to gauge how many people in the UK today believe in SRA, but one well-known activist, a retired police officer named Jon Wedger, has 36,000 subscribers on YouTube.

It sounds horrific, but so do plenty of made-up things. Rosie Waterhouse, an investigative journalist who researched SRA claims for the Independent on Sunday, found that there has never been any evidence to substantiate them: “No bodies, no bones… no bloodstains. Nothing.”

But try telling that to Lee and Morag. The couple frequently go to Hampstead in north London, where, in 2014, a group of parents was falsely accused of running a satanic paedophile ring that tortured babies to death in the local McDonald’s. For years, these parents and their children have been hounded by conspiracy theorists. When I asked Morag what she and Lee do in Hampstead, she gave a startling response. “Harassment,” she said, laughing. “We go around harassing people. We know the families. They shit themselves.” 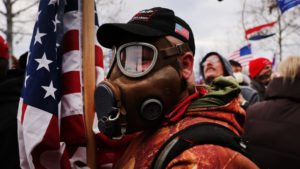 I’ve researched conspiracy theorists of all stripes for my website, Scout, and I’m continually struck by how many share the common denominator of antisemitism, accusing Jews of malign, behind-the-scenes influence. Jewish people were not the focus of SRA activism in the Nineties, but today that seems to have changed. This January, an SRA campaigner, who cannot be named for legal reasons, organised a rally targeting the Rothschilds, whom she called “the most powerful, vile family in the world”. It was held at Waddesdon Manor, the Buckinghamshire estate owned by Ferdinand de Rothschild, a 19th-century banker from the Jewish finance dynasty, and 50 people turned up to accuse the family of hunting children for sport.

Back at the London march, Lee told me about how “Khazarian Jews” (a conspiracy theory about a powerful Jewish cabal) are ultimately responsible for satanic abuse. Later, a campaigner named Grant told me that abducted children are transported through secret tunnels that run underneath the Rothschild & Co bank.

This may sound like a load of dismissible basement crankery, but accusations of satanic abuse have real consequences. In 2020, a campaigner named Wilfred Wong kidnapped a child in Anglesey, claiming he was a victim of satanic abuse in need of rescue. Wong held a knife to the throat of a foster carer while an accomplice snatched the eight-year-old boy from a car. The child was bundled into a waiting vehicle: the plan was to drive to an airport and take him out of the country. Police stopped the car 150 miles away in Northamptonshire and the boy was safely recovered. Wong is now serving a 22-year prison sentence, but his work in the SRA movement continues to inspire followers.

One of those followers is Susan Fownes, who seems to be a key player in the movement. She has set up an organisation called Pacha House in the Highgate area of Birmingham, which has become a hub for activists campaigning against satanic abuse. At Pacha House, Fownes organises conferences and activist get-togethers. She rents it from Birmingham City Council, which gives spaces in the former Quaker Friends’ Institute to community groups. Pacha House is not a registered charity, although it is considering an application to the Charity Commission. Should we forgive extremists?

I wanted to understand what was going on at Pacha House, but having seen Fownes’s Facebook posts about her distrust of the “MSM”, I was certain that she wouldn’t respond to an ordinary interview request. So I got in touch under a pseudonym, identifying myself as a potential donor, and she invited me to visit.

Pacha House is set in a crumbling Victorian mansion. On the surface, it looks no different from any other ramshackle community project: there’s a kitchen garden, a room filled with art supplies, a study with an old computer. It fits with the wholesome image that Fownes is keen to project. “Providing space for seeding initiatives for holistic living,” reads the aims of Pacha House on her Facebook page. “Advocating wellbeing through the common language of nourishment and nature.”

However, this appears to be cover for Pacha House’s real purpose: campaigning against ritual abuse. Fownes told me she first became wary about SRA after seeing the same young mothers on her estate pushing prams containing different babies. “And you start to wake up to the fact that these girls are delivering babies,” she said, referring to the conspiracy theory from the Nineties that claimed women were being used like broodmares to provide infants for sacrifice.

Fownes has posted Facebook videos in support of Wilfred Wong and invited “survivors of SRA” to come to Pacha House. Sharing a video of one SRA influencer, she wrote: “We are debating these themes and others that affect the wellbeing of our communities and children in Pacha House’s Knowledge Library, Fridays and Saturdays.” On her website, Fownes has shared (and since deleted) a list of celebrities, politicians and other public figures baselessly accused of ritualistic abuse and murder. 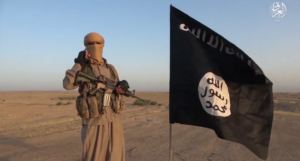 During our conversation, Fownes suggested that she may have misled Birmingham City Council about Pacha House’s true purpose as an SRA campaign hub. Advising me to set up a sister operation, Fownes said: “I wouldn’t use the word ‘front’, I would say ‘set up a community service project, community engagement’, all of that, but you know between yourselves why you’re really there. And just allow it to grow.” In dealing with the council, she said: “Don’t talk about SRA, don’t talk about child abuse, none of that. Say you want to do a community project… but your real intention is to create the space for people to talk about what’s going on.”

Fownes boasted that councils “can’t really refuse” an application, and indicated that Pacha House was beyond scrutiny. “We’re a private club, so it’s none of their damn business,” she said. “We’re not doing anything wrong: we pay our rent, we look after the space that they have not looked after.”

But the most surprising revelation was yet to come: Pacha House, an organisation devoted to eliminating the apparent scourge of ritual abuse, has itself been accused of putting children at risk by inviting men convicted of sexual assault onto their premises.

On 25 June, Fownes hosted an event at Pacha House, and invited a fellow activist called Jane Kelly. Kelly brought her son with her, a man named Stelios Andreas Anatselopoulos, who was jailed for six years in 2014 after taking four children hostage, punching two of them and sexually assaulting a girl.

The incident led some activists to split from Pacha House. Maria Clarke, an online paedophile hunter who was briefly associated with the organisation, said she left after learning that Anatselopoulos attended the meeting. “How can you let a man convicted of child sex abuse in?” she said. 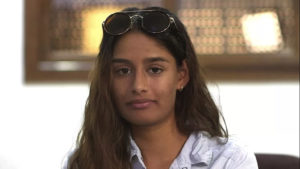 In my meeting with Fownes, she brought up the Anatselopoulos incident without my prompting. She insisted she was unaware of his conviction, and that while children and parents do come to Pacha House, none were present when he visited. “I was absolutely shocked that I had someone on our premises who had a sexual assault conviction on a girl,” she said. “I was furious.”

However, during the afternoon I spent with Fownes last month, there was a knock at the door, and she excused herself from the library to answer it. When she returned, she explained: “That was a guy who comes in. I know he has a previous conviction for sexual assault, which was a few years ago, but as long as there’s no children here I let him in.” Fownes continued: “His personality has changed such a lot,” she said. “I explained to him from the beginning, if there are children here you can’t be here, I’ll have to refuse you entry, but Tuesdays and Fridays you can eat here with us.”

Fownes, without a hint of self-awareness, told me: “When you label someone as a paedophile, you’re actually putting them at risk of harm.” If only the same courtesy could be applied when it comes to accusing innocent people of satanic abuse.

When I put this Birmingham City Council, it responded that it expects Pacha House to abide by its safeguarding rules. “The city council takes its duties under the no-platform policy seriously,” said a spokesperson, “and if presented with evidence that this policy is being breached we would look to take appropriate steps, depending on the circumstances.”

Fownes did not respond to multiple requests for comment. And I’m still uncertain what drives her. But the researcher Karen Douglas says people can turn to conspiracy theories when they feel anxious, uncertain and powerless, typically when the obstacles of life upset their equilibrium. I’ve interviewed plenty of hardcore conspiracy theorists who mention their unhappy stints in the army, their alcoholism, and their lost custody battles.

Contrasted with this, believing in SRA offers a reassuringly simple view: shadowy satanic elites are secretly responsible for the wickedness of this world. Perhaps fighting back, even if that just means standing on a north London pavement to yell at people, is one way to feel powerful. As Morag told me at the protest: “I’ve always been a rebel.” Turning to her partner Lee, she added: “We’re freedom fighters, just the two of us together.”