Watching me treat a pregnant patient with a minor injury in A&E, one of my medical students asked me for some careers advice. She was most interested in obstetrics, she told me, but was worried about the recent controversies that had tarred the specialism. There had been a long, pitiful line of negligence claims against the NHS culminating, last week, in the Betsi Cadwaladr health board agreeding to pay £4m in compensation to the family of a baby who was left “severely disabled” by a caesarean section performed at Glan Clwyd Hospital in 2018.

The best advice I could offer that student was anecdotal. My time in obstetrics and gynaecology was over 20 years ago, but I remember very clearly walking into my first delivery room, taking a deep breath, and repeating to myself, silently, “I’ve got this, I’ve got this, I’ve got this”. At the critical moment, when the baby started to crown and, in an almost cosmic sense, explode into the earth’s atmosphere, I realised: “I have so not got this!”

I had been on the vascular ward where people had lost their limbs. I had taken patient histories only to return later to discover they had died. I thought I had seen everything. But nothing prepares you for O&G. When I was at medical school, students typically experienced a few days on a labour ward, and over a period of several weeks would be expected to assist in around a dozen deliveries. While this may not sound like a huge number, I was competing with eight or nine fellow students, each of whom had to get their dozen in. I was also up against a group of student midwives with their own quota. This hectic status quo, which at the last count oversaw 681,560 live births in the UK, accounts for a less than friendly level of competition among students, exacerbated by a culture of tribalism on maternity wards.

This internal politics put lives at risk. An obstetrician friend often talks of being sidelined or ignored by midwives, while midwives have complained to me of a hierarchy that seeks to undermine their independence. Throughout the country, the battle between doctors and midwives for “control” of the delivery room results in poor decision-making. Mediation is needed in severe cases, but senior hospital managers are often too busy watching their own backs to intervene. It’s a dynamic that causes injuries and fatalities.

When all goes to plan, the aftermath of childbirth should be joyful. Too often, it isn’t. Shortly after my baptism of fire, I was involved in the delivery of a child with foetal alcohol syndrome. I could see instantly from the child’s cataracts and cleft lip that there was a serious problem — but knew from my training that there was very little I could do to help. In this instance, the health service was in no way to blame. But there are times when the institution I’ve dedicated my working-life to does jeopardise the health, and futures, of our most vulnerable patients: newborn babies.

In September, an inquiry began into a hospital not far from where I work. Nottingham University Hospitals’s maternity unit is facing allegations that dozens of babies have died or been left with serious injuries after receiving inadequate care. NUH, which runs Nottingham’s City Hospital and Queen’s Medical Centre (QMC), has already paid out millions to the families of 30 babies who died and 46 infants who were left brain-damaged. It is also being prosecuted over the death of Wynter Sophia Andrews, which could have been prevented had she been delivered sooner. An inquest found she had died from hypoxic ischaemic encephalopathy — a loss of oxygen flow to the brain during delivery — after she was born by Caesarean section at the QMC in September 2019. 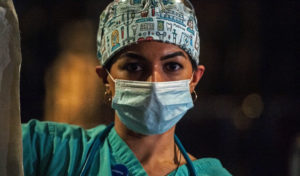 The chair of the NUH inquiry is Donna Ockenden, a well-respected midwife who led the damning review of the Shrewsbury and Telford NHS Trust (SaTH). Once held up as a beacon of good practice, it is now seen as enabling the “worst scandal in NHS history”. Ockenden identified 201 stillbirths and neonatal deaths that could have been avoided had better care been provided. Nine mothers also died as a result of SaTH’s failings.

The 234-page Ockenden report, published in April this year, catalogues a litany of failings that occurred between 2000 and 2019. The Trust lacked everything from “safe staffing” to “robust support for families”. There was also a “failure to follow national clinical guidelines on a range of issues such as monitoring foetal heart rate or maternal blood pressure, management of gestational diabetes, and resuscitation”. Following publication of the report, West Mercia Police were said have identified 823 cases at SaTH between 2003 and 2022. It bears repeating: this is a medical trust that had been celebrated by the NHS for having high standards.

It’s no surprise, then, that it’s not the only trust with a maternity ward that systematically fails. A disturbing number have been caught out recording baby deaths as “stillbirths”, in what many argue is an attempt to avoid scrutiny. East Kent University NHS Foundation Trust, University Hospitals of Morecambe Bay NHS Foundation Trust, Warrington Hospital, Milton Keynes Hospital and Wrightington, Wigan and Leigh NHS Foundation Trust — the list is endless. A Stockport NHS Foundation Trust obstetrician recently told a coroner that he had been pressured by an NHS manager to claim a baby delivered in the hospital was stillborn. Dr Mark Tattersall said it was done out of “loyalty” to the trust (his NHS manager denied this). This is the language of the mafia — not a taxpayer-funded, state-run healthcare system. That midwives feel too frightened to escalate their concerns to doctors, and senior clinicians fail to take action even when cases are escalated, speaks of a system that is not only unprofessional but immoral. Have we learned nothing? Over 20 years ago, the Bristol heart scandal revealed that a combination of ineptitude, arrogance and an old boys’ culture had contributed to dozens of babies suffering brain damage and death following cardiac operations by surgeons. None was prosecuted. Fail to pay your TV licence, and you can go to jail. Fail in your duty of care so that babies die, and nothing happens. There are simply no consequences for the worst and serial offenders within the NHS, and so a culture of mediocrity prevails.

According to the Care Quality Commission (CQC), two out of five maternity units in England are providing “substandard care to mothers and babies”. This troubling review comes off the back of another damning inquiry, Dr Bill Kirkup’s three-year investigation into mass failings at East Kent Hospital Trust’s maternity care. From 2009-2020, 45 babies who died under the trust’s aegis might have survived had they received “nationally recognised standards of care”.

The truly shocking range of scandals, exposes and investigations to hit the NHS’s maternity services is another sign of the service’s dysfunctional relationship between management, staffing and patients. It also raises doubts in the minds of trainee nurses, midwives and doctors — including the student who asked me for career advice. They are not only concerned about the overall prognosis for the NHS, but also worry that obstetrics and midwifery, while essential and worthwhile fields of practice, may be poisoned chalices. In that past year alone, 600 midwives have left the NHS; England is currently short of at least 2,000. One nurse recently told me that having been a midwife for ten years and delivered “thousands of babies”, she returned to nursing in 2020 because her maternity unit had become “too difficult to work in and unwelcoming”. She describes an atmosphere that was “intimidating” for both staff and expectant mothers, with heated differences of opinion and petty grievances between midwives and obstetricians aired in public. “The culture was terrible,” she says. “I just couldn’t take it anymore. I felt depressed going into work.”

Those with a clinical interest in childbirth, such as my student, thus have a right to be concerned about their future prospects, both professionally and psychologically. But everyone who works in the health service should be worried about this staff shortage. Senior hospital managers use two key metrics to analyse the effectiveness of their organisations within a given period: activity within the emergency department and activity within the labour ward. If both are full to the brim on a Monday, it’s going to be a tough week.

Which begs the question: would I advise my student to go into obstetrics, now that the NHS waiting list tops seven million and the Royal College of Nurses’ 300,000 members are planning to take industrial action? Ask me again in nine months’ time.