In 1992, while the ascendant evangelical Right was pushing to roll back abortion rights as part of its “family values” platform, the Democratic party stumbled on a pro-choice message that would not only win the presidency but also define the party’s position for years to come. It consisted of three words, first spoken by then-presidential nominee Bill Clinton, and ultimately heard so often that they started to take on the air of catechism: an incantation whose mere utterance rendered a politician rhetorically bulletproof.

For those whose interest in the American Left only goes back as far as the Obama administration, it’s hard to explain what a triumph this was. Not only did the phrase create a big tent under which even people who felt morally ambivalent about abortion could comfortably gather, it also forced Republicans into insane, reactionary counter-positions. As well as safe and legal abortions, the Democrats were promoting comprehensive sex education and contraceptive access, which would help prevent unwanted pregnancies from happening in the first place — and Republicans, rather than make common cause with their enemies, mostly opted to argue against these things.

And so, for a brief but magical moment, the Democrats could reasonably claim to be the party of fewer abortions and more shagging, while conservatives were left to take the deeply unpopular position that all non-procreative sex was bad, actually.

Caitlin Flanagan of The Atlantic has observed the remarkable staying power of “safe, legal, and rare”, which “translated into language the inchoate sentiments of millions of Americans so exactly that they had to hear it only once for it to become their firmly held position on abortion”. The message was so effective that Hillary Clinton even resurrected it in 2008 during her first (ultimately unsuccessful) play for the Democratic presidential nomination. Two years after that President Barack Obama explicitly identified the phrase as “the right formulation” when it came to discussing abortion.

And yet, in the past 10 years, “safe, legal and rare” has fallen out of favour, as arguments emerged in the more language-obsessed corners of the Left that the “rare” part was unduly stigmatising. “It posits that having an abortion is a bad decision and one that a pregnant person shouldn’t have to make”, one activist wrote last year, in an essay demanding the phrase be retired. 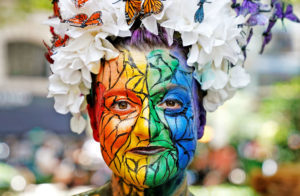 It’s hard to overstate the utter self-sabotaging lunacy of this argument, which not only undermined one of the most popular lines of party messaging in decades but is also farcically nonsensical: “safe, legal, and rare” are surely a solid and desirable set of criteria for any medical procedure that is both unpleasant and unplanned, as abortions (but not only abortions) invariably are.  And yet, the argument prevailed: by the time Hillary ran for president in 2016, the word “rare” had been excised from the Democratic party platform.

In its place arose a variety of messages, none nearly as effective, and some deeply strange, even ghoulish. Among the most notable side effects of the argument that abortion need not be rare is an increasingly prevalent notion that perhaps pregnancy should be. In the days following the leak of the draft Supreme Court decision that ultimately overturned Roe v Wade, the very online Left traded horror stories about what it can do to your body. One much-shared Twitter thread from an obstetrician enumerated the risks of pregnancy like a carnival barker marketing a house of horrors: “Hemorrhage from miscarriage or ectopic, sepsis, blood clots, strokes, heart attacks, hyperemesis and intractable vomiting, increased domestic violence, exacerbations of heart disease, lupus and rheumatologic disease, hypertension, seizures, and mental illness, diabetes” — it’s all right here, folks, and that’s before we even get to the torn anal sphincter and urinary incontinence! Step right up, ladies! 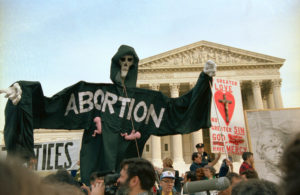 The pro-choice press has only reinforced the horror, by giving us wall-to-wall coverage of the danger of pregnancy and childbirth. Here’s New York Times columnist Pamela Paul with a gut-twisting account of her emergency C-section, which culminated in “being held down by two doctors while my body parts were gathered and reinserted into my torso”. Here’s Kate Manning in the Washington Post talking about urine leakage, blood-covered bedsheets, “cracked nipples and infected breasts”. Here’s Scientific American warning us that “even a seemingly ‘safe’ pregnancy is not without significant risk”. Of course, the intention is only to emphasise that nobody should be forced to go through this — but you would be forgiven for coming to the conclusion that not only should abortion be available on demand, but that no woman in her right mind would ever carry a pregnancy to term unless she had some sort of death wish.

Gone are the days when the Left took pains to emphasise that it was not pro-abortion, but against unwanted pregnancy; instead, this moderate stance has metastasised into a demonisation of pregnancy in general. Some have framed this as a look-what-you-made-me-do position forced by the anti-choice Right: “If there was ever anything beautiful about pregnancy, the anti-abortion movement has devoured it, and spat up something hateful in its place. Pregnancy, for many, will now end dreams, alter futures, maybe even kill,” writes New York Magazine‘s Sarah Jones.

In a recent essay for The Bulwark, Mona Charen laments that “young women reading these stories may get the impression that pregnancy is a hellscape of pain, disfigurement, and degradation”. (I disagree with this argument not in substance but in scope: these stories are no less terrifying to women in middle age who, in their waning fertility, might have been on the fence about having kids and are now loathe to do so lest they turn into the Elephant Man.) But even if this type of rhetoric doesn’t ultimately put a dent in the birth rate, it seems to reflect a penchant on the Left for the opposite of coalition-building, for busting up the movement one taboo turn of phrase at a time. Goodbye, “rare”. Goodbye, “women”. Goodbye, “choice” — the beating heart of the movement, now categorised as “harmful language” — and goodbye to the allies who favoured these terms, now severed and drifting away from the movement like Inuit elders who have outlived their usefulness, cast onto an ice floe to die.

Most remarkable is that abortion access is, in fact, an issue with direct bearing on the lives of a vast majority of Americans — not only women, but any man in a heterosexual partnership with one — and yet some of the loudest voices on this issue insist on describing it as anything but. Consider the now-notorious tweet in which the ACLU listed all the groups most impacted by abortion bans. “The LGBTQ community” was second; “women” were not listed at all.

Such rhetoric is inevitably adopted in the name of inclusivity, which is funny, given how it not only sparks internecine infighting but also rules out virtually every position that might have had widespread resonance in the way that “safe, legal, and rare” once did. It was especially surreal to see this happen in the month or so following the leaked Dobbs decision, which left little doubt that Roe would fall. Neither the revelation of imminent doom nor the arrival of said doom last week could deter the Left from its determination to eat itself alive. Abortion is now banned, or on the verge of being banned, in nearly half of America’s states — and yet we’re still sniping about white women like it’s 2016.

The inability to organise reflects an adolescent impulse within contemporary feminism, an urge to define oneself primarily through the rejection of the waves that came before us. The “safe, legal, and rare” message that framed abortion as necessary but not necessarily desirable is just another relic of the bad old days of Bill, an era in which liberals not only elevated a tomcatting playboy to the presidency, but rallied behind him amid rape allegations, impeachment, and his prosecution for an affair with a then-23-year-old White House intern. That parts of Clinton’s messaging might still be popular with contemporary voters is irrelevant; everything he touched, everything that coexisted in the same moment as his presidency, is tainted by the nauseous aura of boomer cringe. The problem is that we don’t have anything nearly as good to replace it, at a moment when a mass call to arms could not be more desperately needed. The absurd suggestion that abortion access is best understood as an LGBT issue, rather than a woman’s one, isn’t going to help us match the momentum of the Right in a post-Roe world; neither is the imperative to “Shout your abortion” while painting pregnancy as an undesirable, disfiguring disease. These tactics cause rifts even within a base of committed pro-choice activists; a truly inclusive abortion rights movement would surely look more like the painstakingly moderate — and highly successful — Repeal the 8th campaign in Ireland, which respected more conservative elders (there was a “Grandfathers for Yes” faction) rather than rejecting them.

Without a course correction, the Left will soon back itself into a corner, not unlike the Nineties Republican reactionaries who adopted radically unpopular ideas rather than make common cause with their opponents, only worse. Not only are we at war with the Right, we’re also at war with ourselves, with the memory of what the pro-choice movement used to be. It’s a battle that is poorly conceived and ultimately unwinnable in its refusal to acknowledge the truth: that abortion access is vital and necessary, but abortion itself is not a good thing.

No woman sets out to have an abortion; nobody wants one on its own merits. Like most medical procedures, abortion is a solution to a problem — either an unwanted pregnancy, or a desired pregnancy gone awry. In an ideal world, abortion would not only be rare, but entirely unnecessary. It is because we don’t live in an ideal world, and never will, that the right to choose must be preserved.