Thirty-three years ago, when I was a teenager in Nairobi, I was a book burner. The year was 1989, the year of the fatwa against Salman Rushdie, and I was seduced by the rising tide of Islamism. I greeted the fatwa with glee.

I rarely burnt actual books: we were too poor to afford a copy of The Satanic Verses. Instead, we wrote the title of the offending novel and the name of its author on cardboard and paper and set them alight. It was comical and pathetic. But we were deadly serious. We thought Ayatollah Khomeini was standing up for Islam against the infidels, bringing down the righteous fury of Allah upon a vile apostate. Had Rushdie been attacked then, I would have celebrated.

In the decades since, I have been a refugee, an atheist and a convert to the highest ideals and values of the West: free speech, freedom of conscience, the emancipation of women, and a free press. When I fled from a forced marriage and made a life in Europe, I was bewitched by the culture of freedom. But I still remember with a shudder my time as a pious believer on the verge of fanaticism. I know all too well how righteousness in the name of Islam motivates those who inflict violence on supposed infidels.

I have always viewed the fatwa against Salman Rushdie as a strange conflict between two very different figures. On the one hand, a novelist, raised in what was once secular Bombay and living in the England of Monty Python’s Life of Brian; a man in love with literature and language, who spent many years on a quest to become a published writer. Salman is an intellectual, a lover of stories, and a teller of tales. When he wrote The Satanic Verses, he was more interested in the theme of migration than in satirising Islam. He was certainly not apolitical, but he resided in the world of books and the imagination, engaging with the real world through fantasy. He did not set out to offend Muslims but simply assumed that supposedly holy events and texts were fair game for artists to play with, just as Western writers engaged freely, both positively and negatively, with Christianity.

And then there was the Ayatollah, a fundamentalist figure who had spent long years of exile in the West before returning to Iran to overthrow the despotic regime of the Shah in 1979. Whenever I read about Khomeini, I get the impression that he fancied himself a successor to the Prophet. He was both deeply arrogant and fanatically fundamentalist: a very dangerous combination. He was also a writer, though his subject matter was the Qur’an and Islamic law. Not for him the freely roaming imagination; his interest in literature was constrained by Islam. While Salman sought to capture the entire world in his novels, Khomeini couldn’t escape religion. Almost prophetically, Salman included a Khomeini-like figure in The Satanic Verses. A character called only the Imam, he is also an exile seeking to return to his homeland to overthrow a despot and install his own tyranny. Like Khomeini, the Imam wants to turn back time:

“History the intoxicant, the creation and possession of the Devil, of the great Shaitan, the greatest of the lies — progress, science, rights — against which the Imam has set his face. History is a deviation from the Path, knowledge is a delusion, because the sum of knowledge was complete on the day Al-Lah finished his revelation to Mahound [the Muhammad figure in the novel].”

And like Khomeini, the Imam succeeds in his quest and devours the very people who saw him as a messiah against the despot. In this, Salman understood so deeply the nature of the Iranian regime when so many then and now fail to grasp its fanatical, unbending nature. The Western response to the fatwa, as to Iran’s nuclear ambitions, was to negotiate. Then, as now, this is a fundamental misunderstanding of the regime. The world of the West and the world of Islamism are totally irreconcilable. The sooner we realise that nothing will appease the fanatics of Tehran, the better able we will be to oppose them.

Just look at the wording of the fatwa itself: “I call on all valiant Muslims wherever they may be in the world to kill them without delay, so that no one will dare insult the sacred beliefs of Muslims henceforth. Whoever is killed in this cause will be a martyr.” This is the language of honour and of sensitivity. Salman has blasphemed — he has insulted the honour of our precious beliefs — and so he, and many others, must die. 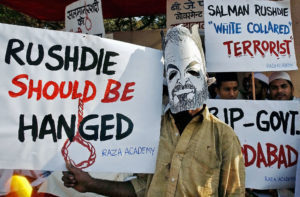 The new war on Islamism

The fatwa is timeless. It won’t die with Khomeini. It is eternal. This is why, when it comes to fighting Islamism, the Western tools of diplomacy and reason are useless. We are faced with an enemy that never gives up, who thinks in terms of centuries rather than months or years, and who will wait patiently for an opportunity to strike. Only by understanding these different conceptions of civilisation can we begin to undo the damage wrought by the Iranian regime and other Islamists across the world.

It is unfashionable these days to defend Samuel Huntington’s “clash of civilisations” thesis. But the attack on Salman shows the truth in it. Yes, there really are different ideas of civilisation — and yes, they are in conflict with each other. The sooner we realise this, the sooner we can recover our belief in Western civilisation, and stand up for it unflinchingly against its enemies, both foreign and domestic.

Salman would not, I imagine, phrase it in such a way, nor would he place such an emphasis on the Westernness of these values. But he is nevertheless an exemplar of them; a champion of free speech, bravely standing up for Western ideals when so many shy away from the fight. If only more people could follow his example, instead of taking the path of appeasement in the name of cultural sensitivity, the long years of murder and mayhem wrought by the Islamists on the West might come to an end.

I have lived those long years; I know all too well the threat Islamism poses. After I came out as an apostate, I was forced into a bubble of protection that still surrounds me to this day. I have 24-hour security. I still receive death threats. My friend, the sweet, vulgar, brilliant Theo Van Gogh was murdered simply for making a film with me. His attacker used a knife to stab a letter into Theo’s chest: it said that I would be next.

When I heard the news about Salman last week, I couldn’t speak. I was horrified, but I was also scared. If they could get him on American soil, would I be next? Although I choose to live with security and Salman didn’t, the attack showed how patient and ruthless the enemy is. I am writing this four days after the attack, and have slept for as many hours. Will I ever be free? Will I ever feel safe? Will my children ever feel safe?

There is no “Biden Doctrine”

But this isn’t my story: it is the story of Salman Rushdie and everyone he stands for, of all the people in the Muslim world and the West who dare to challenge sacred dogmas and find themselves threatened and even murdered for doing so. For them, for us, giving into fear is never an option. As Salman wrote after 9/11: “How to defeat terrorism? Don’t be terrorised. Don’t let fear rule your life. Even if you are scared.”

And yet last Friday, I was scared. I felt terrorised. I was urged to go into hiding and stay silent for my own safety. For a few hours, I let fear rule my life. But still I knew deep down that freedom is a choice — and that I would keep choosing to be free, to speak and write as I please. In this way, in writing this very piece, I defy the Islamists and all others who would silence me.