To understand Blairism and its lessons for Keir Starmer, I go to Trimdon, a former pit village near Darlington where, on May 11, 1983, Tony Blair knocked on John Burton’s door. Burton was a teacher and the secretary of the Trimdon Labour branch. Sedgefield was the only constituency in Britain not to have chosen a Labour candidate. Blair was looking for a seat.

It was the final of European Cup, Burton tells me, sitting in his living room with Paul Trippett, who was also there that night. They made Blair watch the match; then they talked. “No disrespect to the MPs round here in the Seventies, but they were cannon fodder,” says Trippett. “They put their hand up at the right time and it was a culture of booze and not getting very much done. And all of a sudden there’s this young lad and he’s a breath of fresh air”. Burton adds: “If you were normally wanting a seat, you tell people what they want to hear. But he didn’t.”

In 1983, Labour Party policy was for nuclear disarmament and the nationalisation of Marks & Spencer. Burton and Trippett had to sell it on the doorstep. When voters stared at them, Burton and Trippett had to say it probably wouldn’t happen. The party leadership was addicted to Socialism in a constitutional monarchy and unserious about winning power except over rival factions in the Labour Party. “We were New Labour before anybody mentioned New Labour,” says Trippett. “If you don’t get power, you can’t do anything.’”

The majorities were astonishing in safe Labour seats like this one, but they were a taunt. “We need,” Blair told them, “to engineer our policies so that they can actually vote for us [in the midlands and the south]. And then once they vote for us and we get a majority in parliament we can then do the things that you guys want to do for your people in the north-east.” It is a contortion that has divided Labour since Blair left in 2007; his success only compounded the bitterness.

“Every time I listened to him speak, I used to cry,” says Burton. In the footage of Blair’s election night count in 1997, Burton is at the edge of the screen, writing numbers in a notebook. Then they got on a plane from Teeside to London with Blair to watch him speak outside the Royal Festival Hall. “And he said,” says Burton, “‘a new dawn is rising’ and the sun started to shine in the dawn”. When Blair left the hall for Downing Street, Burton thought he would walk on the water.

Sedgefield is 160 square miles of County Durham, and vital: the first steam-powered passenger train open to the public, Locomotion No.1, was assembled here. Blair called it a microcosm of the country — community minded but hard-headed and aspirational — and treated it as such. The media called him an Islington man as a slur, but he wasn’t. (Corbyn was.) Rather, he thought the London Labour Party was “pretty crazy”. He grew up nearby in Durham and there was an alchemy between Blair and his activists here. “We were desperate for power,” says Trippett, “We’d had 18 years of unremittent Tory government.” Blair’s offer of capitalism to fund public services — of emphasising wealth creation as well as taxation — his positioning of Britain as a global power and his fixation on law and order was invented in Sedgefield. 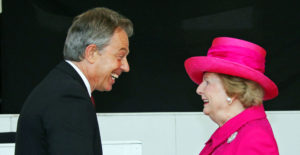 Sedgefield is, as they say, “a real mix”. In the south of the constituency, in the suburbs of Darlington, people are monied and commute into Teesside and Durham. In the east, in the old pit villages, where high streets are bare and buses stop running at six, there is shuttered poverty. Newton Aycliffe, William Beveridge’s idealised new town, was once tidy and preening. Now it is tattered redbrick, though the landscape around it is lush. Sedgefield is small-c conservative, conscious of fairness, and ambitious for itself. It is that archetypal English rural constituency, which is considered a joke in Westminster, but isn’t: save the NHS, hang the paedophiles. When Blair won in 1997, he thanked his constituents, then the police.

Sedgefield town itself is ancient, bustling, and wealthy: a tourist destination for people from surrounding cities to visit at weekends. Restaurants, gift shops and gastropubs surround a tidy green. Corbynites would tut, then settle in: it could be Islington. Black Range Rovers are parked on the streets. Posters advertise a medieval fayre, an easter egg hunt, a flower club, and Jubilee tea parties.

The Dun Cow Inn, where Blair brought George W. Bush for fish and chips in 2003 is warm and faded. They like Blair here. “He modernised the party,” says one man. “Blairism was a reasonable thing,” says another. “He had lovely children,” said a third, pointedly, as if I am poised to say otherwise. One woman thinks that he was “corrupted by power”. When I ask why his legacy is so conflicted, another woman says, “Iraq, and that’s all there is to it”, and turns away. It was his defining example of hubris and nemesis, and it left him looking more like an archetype than a man. Sedgefield went Conservative in 2019. Phil Wilson, who worked for Blair from 1987 and took his seat in 2007, lost as Jeremy Corbyn was conceding. Paul Trippett worked in Wilson’s office. At the beginning of the campaign, he says, they had two teams out, one in an affluent suburb of Darlington and another in a working-class village. The message came back: “We are going to struggle.” Trippett asked them: “What’s the problem?” If it had only been Brexit, they replied, they could win. “But we couldn’t win the seat with Corbyn as leader. We couldn’t sell him. We didn’t want to sell him.” Trippett had been there before in 1983, with Burton and Blair himself, and they loathed the people around Corbyn. Their policies were time travel, Wilson says, but in the wrong direction. The Tories were campaigning in the 1950s and Labour in the 1970s, offering, “Competing images of the past”.

“In 2017 we were given the benefit of the doubt because they didn’t think we could win,” says Wilson. “In 2019 they didn’t vote for us because they were frightened that we would. I remember in 2017 a woman in the polling station saying, ‘Phil I voted for you. But get rid of him.’ That person wouldn’t have voted for me in 2019. Brexit was a part of it, but the biggest fundamental was Corbyn. He went against the grain of your traditional Labour voter who was patriotic, who saw him as a terrorist sympathiser. Giving the Russians the benefit of the doubt over Salisbury? Just embarrassing”. The seat went blue with a tepid majority of 4,513.

Now, Trippett says, “we have to work every seat like it’s a marginal”. The last pit closed 50 years ago and the monolithic culture the mines birthed has gone. Voters think like consumers, and, like consumers they are volatile and hungry. They no longer say: if I don’t vote Labour my grandmother would turn in her grave. They say: what’s the Labour Party going to do for me? Are the voters too individualistic as consumers, too fractured? Trippett ponders: “I don’t know how a political party can be a broad church these days.” It may take time, he thinks, to get Labour into power. Not the next election perhaps. But with the right candidate they’ll get Sedgefield back. Now Starmer is following Blair — emphasising security and law and order — the polls look friendlier. “You win from the centre,” says Trippett, “it’s always been in the centre. Sometimes it pushes a bit one side and sometimes the other but this block in the middle never changes”. I meet Blair online. For someone who has lived through drama he is almost preposterously calm: atrophied by power, by slander. He is polished, wary. He calls Sedgefield, “crucial. I always grounded myself in my constituency and in the community”. He would arrive on Friday for constituency business, address the Labour club, and go to church in Trimdon village on Sunday. It was from this tiny medieval building opposite John Burton’s house that he addressed the nation after Princess Diana died.

The Tory victory of 2019, was, he says, “Corbyn and Brexit: Corbyn more than Brexit in my view. If you put forward Jeremy Corbyn as the potential prime minister of the country in a constituency like Sedgefield, they think you’ve gone crackers”. Labour voters here, he says, “are very patriotic, they are very tough on law and order, and they expect people to behave themselves respectably”.

Why is New Labour so traduced? “The reason,” he says, “is there are two groups of people in whose interests it has been to trash the New Labour concept and record. One on the left who want to say, ‘because you’re New Labour, you’re basically a sell-out’ and they wanted to take control of the Labour Party. And then you got another group of people who are the right-wing people who hated me and New Labour because we kept winning.”

“Once you leave office, unless you have a constituency prepared to argue for the record your enemies close in on it,” he says. “That’s why eventually,” — is the eventually a caveat? — “I think one route back for Labour will be to understand that it should be proud of the last Labour government, and they won’t get there unless it articulates that”. I wonder if it is that simple. Labour is currently polling 13% ahead for the local elections on Thursday. The economy is the most important issue for voters and that is the government’s responsibility. 57% want Starmer as PM, compared to 43% for Johnson. And 47% of voters think he should resign. Starmer is polling well by invoking parts of Blair’s offer, and he is benefiting from Johnson’s chaos, but his problems are different. The economy is not booming as it did under Blair, and there are crises in housing, energy and inflation. Labour is two parties now, and Starmer is far to the Right of his enemies. They don’t want a negotiator to tweak capitalism: they want a socialist Utopia.

In Sedgefield, Labour voters hate Corbyn, despise Johnson and aren’t sure of Starmer yet. There is a weird kind of emptiness here politically: a waiting. It is true that Blair offered a future that came to devour him, but in 2019 both parties chose, as Wilson said, a backward glance. Starmer will make gains on Thursday by following some New Labour paths, but that settlement is a quarter of a century old. However much they long for them in Trimdon, the old politics are gone.