This is not the Night Watch memorialised by Rembrandt in 1642, the civic militia that would defend the city of Amsterdam from outside attack. Now the enemy is within, in the area named for the old city walls, but now infamous as the red-light district of Amsterdam. Els Iping and her neighbour Romeo are pacing the streets. Armed with quiet words and high-vis jackets, they are part of the “Wallen Watch”, a local vigilante defence force against drunken, doped-up tourists on raucous, licentious holidays.

When tourists slip behind chains intended to dissuade them from trespassing on people’s doorways to smoke weed, when there are strippers dancing on bars without a sex licence, when two groups of British tourists share their version of 1980s hits with entire neighbourhoods, Els politely takes note. “Please could you be quiet,” says this grandmother and former politician, who has lived in the Red Light District for four decades. “People live here.” To my amazement, every time, the tourists (often British) look abashed, say sorry and go on their way.

Why have the people of Amsterdam been forced to take public order into their own hands again? Because six decades of tolerating sex, drugs and rock ‘n’ roll have turned their city centre into a non-stop Saturnalia for visitors “on holiday from their morals” (as former Labour councillor Dennis Boutkan memorably put it). But morality aside, it is also a question of numbers: with thousands packing out the roads and streets on weekend nights, it is sometimes impossible for even emergency vehicles to access the area. And Els and Romeo are not alone in believing all this has been facilitated by the legal grey area of state policy on soft drugs.

Romeo, who has lived for six years at the heart of all this, says that when he leaves for his morning work at 4am, there are frequently still groups of screaming tourists. “With the corona rules, the place was empty in a day,” he says wistfully. “I saw people who live here, who never dared to sit outside before, having a picnic.” Now the pandemic lockdowns are gone, the tourists are back. And 47% of them are tempted to Amsterdam by the coffeeshops, although it’s clearly the combination of party behaviour (drinking, screeching, leering, urinating, with a spliff on the side) that creates the most localised nuisance. “We started last year with 30 people,” Els tells me. “Six people have moved away. It’s noise you can’t arm yourself against. We are desperate…but I don’t want them to win.”

“They”, in her view, are the businesses that have everything to gain from a loud and cash-filled Red Light District: the drug dealers offering a menu from pills to cocaine, the brothel owners, the 166 cannabis “coffeeshops” (100 serving tourist demand alone), plus sweet shops, bars and restaurants (for those with the munchies). Some may be set up by upright businessmen; some, says the mayor of Amsterdam, are part of criminal networks. Thanks to the opaque business constructions common in the Netherlands, it’s hard to tell them apart.

And for local residents, ironically, the Dutch idea of “tolerance” has become completely intolerable. The prostitution windows where sometimes-trafficked foreign women show off their cosmetically enhanced wares, the raucous bars, the coffeeshops where cannabis is sold and smoked, feel like an invasion: not a liberal paradise, but a human zoo from another age. A soft drugs policy that was ahead of its time in the Sixties has stranded the Netherlands in a no man’s land between controlled legalisation and arrant criminality. Under the Opium Act, a policy of toleration or gedoogbeleid means that the state allows “coffeeshops” to be established, taxed, and to sell cannabis to customers for consumption on site. However, since commercial cannabis growing is illegal, they have to buy from criminals. Mayor Femke Halsema, the deputy mayors and heads of the local police and public prosecution are convinced that the situation is untenable. Halsema believes that full legalisation and regulation of cannabis — and also cocaine — is the answer. In the meantime, she wants to enforce an existing national law to ban tourists from coffeeshops in order to shrink the sector. A majority of city councillors, concerned about more vulnerable young men being sucked into dealing to meet tourist demand and a consequent explosion in street crime, voted against her proposal this month.

Diederik Boomsma, councillor and head of the local Christian Democratic Appeal party, is one strong advocate of banning tourists from coffeeshops and is raising awareness about the dangers of drug use. “Peter Hitchens wrote a book about the drug policy in Britain and it starts with saying: cannabis isn’t merely a drug: it’s a cause,” he tells me. “That’s true in Amsterdam more than in other places and when something becomes a cause, people associate it with their self-understanding as a free, liberal, open-minded, tolerant city. But it doesn’t work. On the one hand, we say it’s allowed, you can buy the stuff in this coffeeshop, but it’s supplied by criminals so obviously you are going to have a huge criminal infrastructure. Why would you do something that funds violent criminals? Peter R de Vries was murdered right in front of my house.”

He is referring to the murder of a Dutch journalist who had been advising the crown witness against an alleged drug cartel — a killing which shocked the country into paying attention to its drugs problem. It was the third execution linked with the Marengo murder trial (involving leading members of a Dutch-Moroccan criminal organisation) following the deaths of the crown witness’s brother and his lawyer. For while the Netherlands’s transport links and horticultural and technical skills have made it a perfect landing-point for South American drugs (alongside its hugely successful domestic drug industry), this has brought violence in its wake. Experts like Jan Struijs, chairman of the Nederlandse PolitieBond police union, go as far as to call the country a “narco-state 2.0.”

Threats that the Telegraaf newspaper suggests come from the quarter of organised crime have recently even been aimed at Dutch Princess Amalia and Prime Minister Mark Rutte. And four suspects were arrested in and around The Hague on suspicion of preparing to kidnap Belgian justice minister Vincent van Quickenborne, after Dutch drug gang violence spilled over into Antwerp this summer. Across the Netherlands, drug experts like Pieter Tops and Jan Tromp — who wrote an influential 2019 report on the “dark side” of Amsterdam — believe some coffeeshops are part of a chain of ever more violent and lucrative drugs criminality, with shops, bars and property used to launder the money (part of a dodgy €16 billion a year that washes around the country, according to the De Nederlandsche Bank). It’s a desperate situation, with the Dutch government investing millions in deterring crime that undermines public order, and putting together international partnerships to make its coastline “as unappealing as possible” for drug criminals importing their products. The public prosecutor finally has a larger budget to go after crime that has seeped into the “upper” world: lawyers, art galleries, accountants, banks and even civil servants who have committed alleged passport fraud, sold private details, failed to properly scrutinise their clients, or been over-eager to take payment in cash.

The justice minister of the Netherlands, Dilan Yeşilgöz-Zegerius doesn’t think legalisation by the Netherlands alone will do much, but admits the tolerance policy on cannabis really isn’t working. “If I’m honest, the ‘back door’ as we have it now in the Netherland, that [soft drugs] are tolerated but you can’t grow them, is very difficult to explain,” she tells me, after a meeting of European justice ministers in Amsterdam.

“Abroad, people look at you as though you are crackers. One point of view is that weed and soft drugs are another sector, another branch, with hard-working entrepreneurs and nothing wrong. But there’s also a notion that this is an entry point for cartels and other levels of drug dealing. You need to look at this very carefully.” She hopes that a much-delayed trial of legalised growing within 10 local areas begins soon so the ministry can analyse whether regulated cannabis growing reduces criminality. Meanwhile, others countries are experimenting with more permissive approaches to cannabis. Uruguay made the drug legal in 2013, followed by Canada, Mexico and some US states. Medical usage was legalised in Portugal in 2018 and Thailand is turning a blind eye, to stimulate tourism. 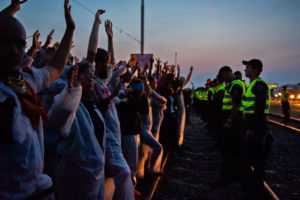 The rotten heart of the Dutch gas wars

While some people, including Amsterdam’s mayor Halsema and the attorney for the Marengo crown witness, Peter Schouten, believe legalising and regulating drugs is the only way to sort out the situation in the Netherlands, others want to send a message that drug tourism isn’t welcome. Boomsma has proposed a ban on weed smoking in public in the centre of Amsterdam, and believes his motion will get a council majority this year.

In the meantime, the situation in De Wallen — even compared with the bad old days of heroin addicts on the streets — is relentless for local people like Els and Romeo. While some political parties are focused on the problems of vulnerable districts on the outskirts, Els and Romeo point out that it is madness to make any part of the city essentially unliveable at a time of desperate housing need. Even some of the tourists seem blown away by it all. A young Australian woman emerging from the Casa Rosso “erotic theatre” at the end of the night on the Oudezijds Achterburgwal canal, seems a bit dazed. “I need to wash off the filth,” she says, looking around and only half-joking.

The Netherlands needs more than a shower of liberal platitudes to clean up De Wallen. It needs clear drugs policy, a flashlight on criminal constructions and a power hose.