It was the first night of Blackpool’s Illuminations, when seven miles of promenade are transformed into a parade of glitter set against the ink-black Irish Sea. The traffic had poured in from across Lancashire to crawl, bumper to bumper, beneath the dazzling arrays. Yet by the following morning, the tourists had disappeared, and despite the September day of brilliant sunshine, the promenade was almost empty — apart from the rough sleepers.

From her bench facing the sea, one elderly lady rearranged her sleeping bag and sat up to light her first cigarette of the day; another rough sleeper was angry as he stumbled, yelling into the waves: “Yer English, yer oughter to be ashamed of yersain.”

He has a point. Britain’s biggest seaside resort is home to a sharp and uncomfortable paradox: while it accommodates millions of visitors every year, several of its wards are among the most deprived in the country and with the worst life expectancy. This is a place which, for all its beauty and associations with pleasure and fun, results in shortened lives blighted by debt, ill health and substance abuse.

When William Beveridge set out to eradicate five “Giant Evils” from Britain, “want” was first on his list. In the early Forties, as the social reformer gathered his data and prepared his plans, this priority seemed straightforward: people needed basics such as food, shelter, warmth and clothing. His plans for a social security system “from cradle to grave” would ensure that no one would go short. But 80 years on, Blackpool provides a grim example of deprivation not seen since the Thirties. Food banks report a 54% increase in the need for food parcels in the last year, dependence on charity has become normal for hundreds of families in the town, and the rise in energy prices brings particular hardship in a place with poor housing stock, well-known for its bitter winds and rain sweeping in off the sea.

Further up the coast, in Morecambe, a similar story is playing out. The North Lancashire Citizen Advice Bureau (CAB) has seen a massive rise in clients desperate for help — in some places, a staggering 566% increase in the last year. The most common issue is struggling with utility bills, followed closely by problems with debt. Households get caught in a pattern of borrowing and relying on charity because levels of benefit are not sufficient, suggests Joanna Young, the CAB’s head of research for North Lancashire. She adds that their clients talk of how one “mini-crisis” — it can be as routine as the need for a new pair of school shoes — can set a family back for months. Precarity has become a way of life. 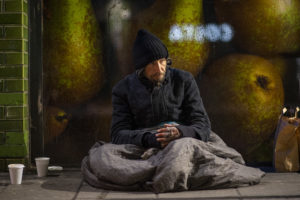 What would Beveridge make of places such as Blackpool and Morecambe? No doubt he would view his dream as a failure, despite a huge increase in the country’s GDP in the intervening 80 years. But what would also have surprised Beveridge are the causes of that poverty, and the fact that at least some can be traced right back to gaps and mistakes in his original plans.

Beveridge was no socialist, and he believed that work was the true solution to poverty (after all, he listed “idleness” as one of the other five Giants). But, as Professor Jonathan Bradshaw has noted, he overlooked the issue of low pay. Roughly 40% of the CAB’s clients in North Lancashire are in work — and this figure is supported by nationwide data, such as research by Joseph Rowntree Foundation which found that three out of four children living in poverty have a working parent. Chronic low pay particularly affects coastal resorts because so much of their employment is in the worst-affected sectors such as care and hospitality; the average wage in Blackpool is a third below the national figure. The result is a coastal pattern of some of the lowest average wages, highest levels of indebtedness and insolvencies. And this was already getting worse well before the devastating economic damage of the pandemic and the cost-of-living crisis.

But Blackpool and Morecambe do not just illustrate the failure of Beveridge’s ambition; they also demonstrate forms of “want” that he never envisaged. Beveridge’s interpretation of poverty was strictly material, but in the 21st century the relevance and importance of another form of poverty has become starkly apparent. Blackpool and Morecambe are just two of the dozens of seaside resorts struggling with what are known as the “diseases of despair”.

Seaside towns have been left to cope with a disproportionate number of the most troubled in society. When relationships break down, when prisoners are released, when people with substance abuse issues want a new start, the childhood memories of a seaside resort can appear to offer hope, and every year thousands arrive on the coast looking for a new start. A major driver is housing costs: as they have soared out of affordable reach in most cities, many of the poorest and most vulnerable are effectively forced out. They get on a train to the end of the line. In the South-East, this includes towns such as Clacton (where the neighbouring resort of Jaywick has held the designation of the poorest place in the UK since 2010), Hastings, and the Thanet resorts of Margate and Ramsgate. Similarly, rising prices in Manchester and Preston ensure that people end up drifting to Blackpool and Morecambe. And this holds for countless other resort towns, from Scarborough to Skegness, Ilfracombe to Weston-Super-Mare and Rhyl in North Wales.

When I visited Blackpool in September, I spoke to Ian Treasure, who has worked on a number of local projects for rough sleepers. As we passed along the streets adjoining the promenade, he pointed out the tell-tale signs of “Houses in Multiple Occupation” which dominate the area. Long lines of door bells and rows of bins mark out the bedsits created out of the former hotels. The cheap housing stock is often bought up by absentee landlords and divided up into accommodation which can be rented for a fraction of the cost. This is what draws the approximately 8,000 people who arrive in Blackpool every year; a large proportion of whom are on benefits and are disproportionately male and single. They bring with them many of their demons, lack of trust and relationship. What ties they may have had – family or friends – are left behind, making this type of coastal poverty often lonely and unsupported. These forms of emotional and relationship poverty were not something Beveridge grasped in the Forties, but with them comes poor mental health, and in the case of Blackpool, some of the highest suicide and self-harm rates in the country. Four Blackpool wards have the lowest life expectancy in the country at 66.6 years, compared to a UK average of 82.3 years. As the Chief Medical Officer’s annual 2021 report on seaside towns makes clear, Blackpool has “the single most vulnerable population in the country in the most inappropriate accommodation”.

Yet the growth of this desperate poverty has only accelerated in recent years; during the pandemic, the buy-to-let market in Blackpool boomed, encouraged by the relaxation on stamp duty and promises of high investment yields from tenants on housing benefits. Elsewhere, Beveridge would have been appalled by the misuse of public funds; his central argument in support of the welfare state was that it would make the population healthier and better educated in order to underpin economic growth. In contrast, Blackpool (and many other coastal towns) has resulted in the opposite; a system of farming the most vulnerable in society at government expense, with the profits sucked out by landlords who do not live in the area.

As if this were not enough, many seaside towns also face another of the great social challenges of our time — one which Beveridge did not envisage, and which is, in many ways, the result of his great achievement, the founding of the NHS. That is, the fact that we are living longer, and that many choose to spend their retirement years in coastal towns; Minehead in West Somerset and Skegness and its neighbouring Lincolnshire coast resorts have some of the most elderly populations in the UK. This will be the great test of the NHS over the coming decades; our longer lives require the management of complex chronic health conditions, leading to greater demands for health and social care. Yet vacancies for doctors and nurses are higher on such poorly connected coasts, while the ratio of elderly to people of working age is worsening, raising concerns over who will care for the growing number of octogenarians by the end of this decade.

The big picture here is the power of geography to determine lives. The British economy is driven by the vitality of cities and this has shaped infrastructure investment (disproportionately concentrated in London). Meanwhile, the periphery is neglected, only useful as a form of cheap investment or a zone to dump those whose needs are no longer accommodated elsewhere. The challenges for the coasts’ overstretched councils and health authorities are Sisyphean, with little recognition of their unique nature in Westminster or Whitehall. The Levelling Up agenda of recent years may have dominated the headlines, yet it has showed scant insight into these areas’ plight given its preoccupation with driving up productivity — always a challenge in care and hospitality. Eighty years on, the entire of Britain needs another Beveridge. But perhaps more than anywhere else, its forgotten seaside towns need a Beveridge who can actually get the job done.