President Joe Biden likes to tout the exceptionalism of “our democracy”. It is, he said in his commemorative remarks on the 9/11 attacks, “that which makes us unique in the world”. He also likes to tout the idea that “our democracy” is under threat. “We have an obligation, a duty, a responsibility to defend, preserve, and protect our democracy,” he continued. “The very democracy that those terrorists on 9/11 sought to bury in the burning fire and smoke and ash.”

Put to one side the fact that the impetus for al-Qaeda terrorism was not “our democracy” but America’s liberal hegemony and military interventionism abroad — the exaggerations in this dramatic piece of historical revisionism echoed a speech Biden had made in Philadelphia mere days earlier. Speaking in an eerie set-up at Independence Hall, Biden had warned against the threat of a different terror, closer to home — from “Donald Trump and the MAGA Republicans”, who “represent an extremism that threatens the very foundations of our republic”. According to him, they promote “political violence” and “undermine democracy itself”.

After 21 years, it appears we have gone full circle: the War on Terror’s “you are either with us or against us” mentality has come home. Where George W. Bush used American exceptionalism as a basis for militarism and political absolutism, Biden has leveraged democratic exceptionalism — weaponising the mythos of democracy for partisan gains.

Seen together, Biden’s speeches highlight the often-overlooked synergy between domestic and foreign policy: his rhetoric depicts his administration’s war against the amorphous spectre of  “MAGA fascism” at home and its stated goal of militarily defeating autocracies abroad as two sides of the same coin. These speeches could ensnare sceptics on all sides of the spectrum, enmeshing them in false equivalencies. Deny the Establishment’s liberal internationalist foreign policy and risk being brandished as one of the “extremists” at home; defend America’s civil liberties and due process toward January 6 rioters, and you are in league with Vladimir Putin. This is troubling for any critic of US policy in Ukraine or Taiwan right now, especially the voices of anti-interventionism on the Left. Such voices are already under pressure to conform to the party line and self-censor their restrained positions for fear of being associated with Donald Trump and MAGA Republicans.

Admittedly, the military withdrawal from Afghanistan last year was a breath of fresh air. But the Biden administration still exhibits decidedly hawkish attitudes, as showcased by the Alaska summit, the rhetoric around toppling Putin, and the recent security pledge to Taiwan. And to justify them, it spins an ideological narrative, centred on the existential clash between democracies and autocracies. What’s more, this invented Manichaeanism can be used to browbeat political opponents at any time. Put simply, in addition to creating a moralistic concept of statecraft to use abroad, this existential framework is used to silence those critical of American military interventionism and liberal hegemony, such as the foreign policy realists and restrainer critics of the Blob in Washington. 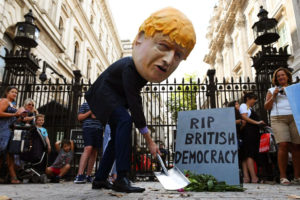 This form of language game is designed to coerce critics into feigned obeisance, valorise the liberal hawks as the crux of the Democratic party, and undermine the remnants of the Anti-War Movement on the Left. It is perhaps ironic — if always inevitable — that the global Democracy Crusade would come home to haunt Americans. The abstract and ominous nature of “authoritarianism” is a convenient way to dismiss Trump supporters en masse as sympathisers with global tyranny — and to disingenuously equate realism and restraint with Trumpism.

This is an absurd equation. The Trump administration housed many globalists such as John Bolton and Mike Pompeo, who used their tenure to advocate for “maximum pressure” against Iran, call for regime change in Venezuela, and facilitate the bombing of Syria. Moreover, criticism of US liberal imperium, and the “liberal international order” it has masterminded, comes from both sides of the political divide; it is neither partisan nor the exclusive domain of populists. While the logic of democratic exceptionalism has been routinely — if selectively — applied to justify liberal interventionism abroad, this agenda has an atrocious track record. It should remain open to criticism from all quarters, particularly in a democratic republic.

After all, the conventional wisdom underpinning the promotion of democracy as a foreign policy objective has now been seriously challenged. Such policies have routinely failed, especially because they tend to focus on the performative and procedural elements of democracy, rather than strengthening effective governance — an approach that masks profound systemic dysfunction. America’s failed policies in Afghanistan, Iraq and Haiti are perhaps the most notable examples, but so too are challenges in West Africa, where the US has been compelled to devise a new approach. The failure to prevent an anti-democratic coup in Myanmar, meanwhile, underscores the limitations of US geopolitical reach.

In a different era — at the height of the Cold War, perhaps — Biden’s Manichaean rhetoric might have been a rallying cry for many nations in the developed and developing world. But today’s era is multipolar. Nations, especially in the Global South, are unshackled from the ideological straitjacket of the Cold War and its perception of shared global threats; they are driven instead by the pursuit of economic prosperity and recovering their regional and civilisational strength. America’s democracy agenda rings hollow.

There is no “Biden Doctrine”

The same is true at home. American public opinion has grown weary of the activist and internationalist posture of US foreign policy, embodied by decades of endless wars. Democracy promotion is no longer seen as an effective way to advance core US geopolitical interests. The US ruling class has therefore sought to adapt and reframe America’s global adventures and interventionism in terms of a domestic threat that would presumably be more easily marketable to the American public.

This logic has now become the operating principle behind what may be called the Biden Doctrine, which is expected to be unveiled in the administration’s forthcoming National Security Strategy. It holds that the fight for democracy is incessant, totalising, and all-encompassing. That neutralising the alleged threat of fascism at home, personified by MAGA and former president Trump, is part of a larger apocalyptic struggle to defend the liberal international order abroad.

The Biden Doctrine elevates “democratic exceptionalism” as the ideal trope with which to advance its foreign and domestic agenda, while using it as political mallet to normalise any efforts to silence, cancel, and discredit dissent. The latter has long historical precedents with the US ruling class in the 20th century: it echoes the US. establishment’s support for anti-German hysteria in the First World War, the internment of Japanese Americans in the Second World War, and the persecution of American socialists during the McCarthy era.

The underlying conviction is that in the increasingly polarised America, securitisation and weaponisation of threat, through its identification with domestic enemies, is a viable galvanising force — one that justifies and maintains the imperial controls of the state. In this neo-Jacobin milieu, democratism offers a crucible with which to meld and cohere domestic preferences with foreign ambitions.

During his presidential campaign, Joe Biden stressed the importance of building an “alliance of values” based on democratic principles. After two years on the job, his goal of democratic resurgence has become double-edged: to defeat political opponents at home and confront hegemonic challengers abroad. Biden might consider this double-edged agenda “a battle for the soul” of the United States and the “challenge of our time”. But this existential, ideologically-charged language only underscores the need for a sober assessment of this worldview — particularly at a time when America’s credibility as a model democracy is in doubt and its ability to lead remains uncertain.