In the Forties, Dorothy Thompson posed the question “Who Goes Nazi?” Our version today, endlessly asked, is “Who Goes Fascist?” The unfortunate answer seems to be: everybody. Over the past few months, I’ve seen the “fascism” tag applied without a hint of irony to comic-book fans, health fanatics, and the claim that men and women tend on average to be different heights. Our vast media meat grinder has an irritating tendency to reduce once substantive political concepts into casual, meaningless buzzwords.

It’s why I’m sceptical about any discussions regarding the prospect of American fascism. The latest trigger was Italy’s general election, which swept the ambiguously populist Right-wing party Fratelli d’Italia into power. But this is only the most recent. Before that, President Biden himself singled out segments of the GOP as “semi-fascist”, and while he didn’t elaborate, a number of commentators doubled-down on it. Earlier still, scholars in highly-coveted positions, such as Jason Stanley and Timothy Snyder have created veritable cottage industries out of a moralised analysis of what they treat as a global surge in fascism.

The fascism discussion is increasingly taking on a meta dimension, in which half of the arguments now circle around the usage itself, and whether disputing its usage perhaps makes one, if not fascist, then insufficiently dedicated to the spirit of democracy (as well as pedantic, and so on).

But why do we keep returning to this subject, and why do we find it so difficult to even agree on the terms of the debate? The second question is the easier to answer. For, despite being one of the major forms of modern political organisation, fascism is probably the least well understood. The great Italian historian of fascism Renzo de Felice remarked that unlike liberalism or communism, fascism had no defining texts — no Second Treatise of Government, no Das Kapital. And while it attracted major thinkers such as Martin Heidegger and Carl Schmitt, neither produced a work that served to systematically define it for future generations.

It is the least systematic of the major ideological tendencies of the 20th century, and generating an inductive understanding is complicated by the confounding factors in each country’s specific manifestation. In Italy — the original incarnation of fascism — you have inter alia the particular character of Mussolini, but also the unique role of the Vatican, the country’s geopolitical situation, the recent and still ongoing colonial ventures, and the rising importance of diplomatic relations with Nazi Germany. Meanwhile, other Right-wing regimes of the 20th century — Spain, Portugal, Greece, Argentina, Syria — all incorporated elements or factions of fascism without necessarily embracing fascism tout court. And over all this hangs the shadow of Nazism, which is of course a variant of fascism, but one whose most salient features — race worship and Jew-hatred — are neither necessary nor sufficient conditions of fascism.

All of which is to say that confusion surrounding the term is probably inevitable, though this has hardly limited its usage. On the contrary: it has by now become an almost obligatory grace note of disapproval, regardless of how far removed from the subject at hand (nor is this dynamic limited to the Left — cf. Jonah Goldberg’s lazy manifesto Liberal Fascism). Of course, this is demonology, not political analysis. As George Orwell put it: “The word Fascism has now no meaning except in so far as it signifies ‘something not desirable’.” It is in this sense, the domestic equivalent of bringing up the Munich Agreement in foreign policy debates.

How Hitler killed the Devil

But fascism is not just an empty ideological vessel; it describes a programmatic way of organising political society that differs from either liberalism or communism. Fascism is a totalising project — one that channels all subsidiary institutions from the family to business corporations to the nation toward the interests of the absolute state. And as Adam Tooze has pointed out, this almost always operates in concert with extraordinary military and economic mobilisation against perceived threats, both foreign and domestic.

If this doesn’t sound very much like any major political phenomenon today (and it doesn’t), why then do we obsess over it so? It is clear that the idea of fascism — however nebulous — continues to exert a unique, dark fascination for us (alas, poor communism, with its nearly 100 million dead, apparently lacks a certain je ne sais quoi). And perhaps this is nothing new. Almost 50 years ago, Susan Sontag noted how: “For those born after the early 1940s, bludgeoned by a lifetime’s palaver, pro and con, about communism, it is fascism — the great conversation piece of their parents’ generation — which represents the exotic, the unknown.” 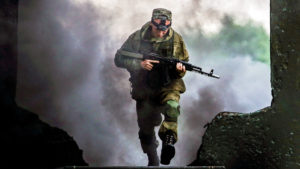 The liberal order is already dead

But I think there’s something more at work in the collective quasi-obsession with identifying and rooting out fascism in our own society. Machiavelli has a great line where he notes how Roman writers would “praise Caesar but blame Catiline” as a coded way of talking about what were in effect Caesar’s crimes. Something similar seems to be at work with respect to how we discuss the defects of democracy — assigning those tendencies we least like to some external phenomenon that we call “fascism”. Overweening executive power? Militarised deep state? Consolidated corporate authority working hand-in-glove with centralised bureaucracies? Immigration restrictions? Political demagoguery? The truth is that all of the elements that we have seen fit to attribute to the external threat of fascism are perfectly compatible with democracy.

Some of this is simply a function of the phenomenon identified many decades ago by the philosopher Alexandre Kojève: that diverse ideological tendencies are submerged under the overarching form of the modern state. But it is also the case that democracy itself — like Whitman — contains multitudes. And our insistence on associating all political virtue with democracy and vice with various opponents (authoritarianism, autocracy, fascism, etc.) has blinded us to this fact. Like it or not, our ongoing political disputes ultimately remain family disputes, and we will— not for the first time — have to work them out among ourselves.

Ernst Jünger: our prophet of anarchy

By treating fascism as kind of eternally recurring political tendency, rather than a historically distinctive phenomenon, we have elevated it into an Aristotelian taxonomy of political life, but without anything like Aristotle’s philosophical rigour. The result is that our political understanding is reduced to a sliding scale with democracy in the middle, and communism and fascism at either end, serving as permanent tendencies against which we require constant warning from the great and good among us. This account is both too small and too big: on the one hand, this represents an impoverishment of our political imagination; but on the other, it needlessly introduces external ideological categories in lieu of a serious analysis of the political tendencies distinctive to democracies themselves.

In the end though, does any of this matter, beyond its importance to the egos of a handful of public intellectuals? I think it does. First, because — as the motto of Faber College has it — knowledge is good. The “everything is fascism” discourse presents an impoverished understanding of political possibilities, and leaves its audience less informed than when they started. But it also matters because, if you think as many do that our democracy is in a bad way, then a misdiagnosis is practically and not just intellectually dangerous. Getting it right is a concern for citizens, not just scholars or “Historian here!” types on social media. Meanwhile, the self-proclaimed doctors of democratic society, having diagnosed the disease as fascism, lambast anyone who disagrees with them as being a partisan of the disease itself, even as the patient grows sicker and sicker.