Neymar smirks down at me from a billboard. Nearby, Ronaldo and Mbappé gaze off in the direction of the sea. A few streets down, Lionel Messi holds a ball in the crook of his arm, looking sweet. Here in Dubai, the 2022 World Cup is very much in evidence. Neighbouring Qatar is where the tournament is being held, but it is less forgiving about things like booze and partying; in Dubai, they’re part of the brand. Foreign fans are arriving this week to watch the games in more relaxed surroundings.

Football remains a global business, which is why it came to Qatar. But if the sport is about cash, it’s also about a lot of other stuff, too. “Football isn’t a game, nor a sport; it’s a religion,” said Maradona. The former Liverpool manager Bill Shankly was hardly more stoic. “Some people think football is a matter of life and death,” he said. “I don’t like that attitude. I can assure them it is much more serious than that.”

After all, as Amy Chua has written, humans are tribal creatures: “We need to belong to groups, which is why we love clubs and teams. Once people connect with a group, their identities can become powerfully bound to it…. They will sacrifice, and even kill and die, for their group.” This explains, in part, why football has always been associated with violence. While the problem has lessened in the past 20 years or so, groups of (almost exclusively) men from around the world still get together on weekends to merrily beat each other senseless.

My time in Dubai will coincide with a match that I have been looking forward to ever since it was announced. On Monday, England, the country of my birth and nationality, will play Iran, the country of my mother and of my childhood imagination.

To anyone who properly follows football, there are generally two teams in your life: the national team and the domestic club you support — the latter being almost invariably the one that truly matters. This speaks to a further sociological truth: the smaller the tribe, the more intense the feeling it arouses. This is one reason why all politics is local. I support England; I love (or possibly hate, I remain unsure) Tottenham.

Supporting England is tricky. We’re not very good but, then again, we’re not terrible either. This breeds the most dangerous of things: hope. And it is the type of hope doomed to be continually dashed. Penalty exits and absurd losses; the endless premature tumbling out of tournaments. Graham Taylor. That is the life of an England fan.

Many years ago, in a bar in central London, a Brazilian explained to me how his national football team (the most successful in footballing history) came, in all its remorseless reliability, to fill the emotional space left by both the failing state and his absent father. Omnipresent and consistent, it became the solid, dependable force needed by a growing child. If Brazil is the benign parent, reading you bedtime stories and scooping you playfully up onto his shoulders, England is the dad who got drunk constantly, banged the au pair, and never showed up to sports day. He said he would be there. He promised; swore, even. You told all your friends he was coming. But there you stood outside the sports pavilion, in ballooning shorts and an oversized T-shirt, looking up and down the street for the unfeasibly expensive car that never came. Brazil is the father you never had; England is the father that never was. But still, you probably can’t live without him.

The point of all of this is to say that national teams end up being, in large part, a reflection of at least one aspect of ourselves. And nowhere is this truism more apt than for Iran. There are several things to understand about Iran and football. Most immediate is that the national team is better than you think. As of October 2022, they are ranked 20th in the world. They first made the World Cup in 1978, six months before the 1979 Islamic Revolution, and have since qualified in 1998, 2006, 2014, 2018, and in 2022. They haven’t yet made it out of the group stage; this time they are in a group with England, Wales and, thrillingly, the United States. What drama indeed.

The second is that, more broadly, Iranians adore football. Team Melli (as they call the national side) enjoys fanatical support: 100,000 fans regularly attend national games at the Azadi stadium (which only legally holds just under 80,000). Domestically, the Tehran derby, in which Esteghlal faces off against Persepolis, is a national event.

The third is that football in Iran has always been political. Back in the Eighties, Iranian football stars Hassan Nayebagha and Bahram Mavaddat became prominent in the anti-Islamic Republic group the Mojahedin-e-Khalq (MEK). Former national captain Habib Khabiri was duly tortured and executed in 1984 for supporting the group.

In one sense, this is unsurprising. As Franklin Foer observes in How Soccer Explains the World, “there’s a long history of resistance movements igniting in the soccer stadium”. In Belgrade, football hooligans helped topple Slobodan Milosevic in 2000. What began as celebrations for Romania’s 1990 World Cup qualification eventually ended in a firing squad for the dictator Nicolae Ceaușescu and his wife. 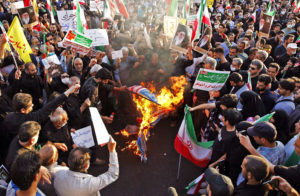 Public spaces are always dangerous for dictatorships because they are arenas where opposition movements can coalesce and challenge. The Islamic Republic, a revolutionary regime born from its own street protests, understands this better than perhaps any other contemporary autocracy. For the Mullahs, football matches are the worst type of public spaces: secular ones. At football, Iranians are not Muslims or men and women: their one and inescapable tribe is Iran. That’s dangerous for an Islamic Republic. In the country’s football stadiums, the national is about as local as you can get. If football was about religion for Maradona, for Iranians it is avowedly not — and that is the point.

And it is where the people can gather and, on occasion, rebel. Women have been unable to watch a match in stadiums since the 1979 Islamic Revolution; not that it stopped crowds of them from breaking into the Azadi to celebrate Iran’s qualification for the last World Cup. In 2017, former Iran captain, Masoud Shojaei, observed: “Many, many women in Iran love to watch football matches played by men… if it is agreed to allow women in, a stadium should be built with the capacity of 200,000 because just as many women as men will be there.” A year later, the police arrested 35 women for trying to get into the Tehran derby.

As protests erupted across Iran in recent months following the brutal murder of Mahsa Amini, Iran’s footballers have — to the degree they can — made their feelings known. The team recently refused to sing the national anthem in protest. In September, three players, Sardar Azmoun, Alireza Beyranvand, and Majid Hosseini, posted Instagram stories in support of the demonstrations. And when Ali Karimi, a legendary ex-player, recently called for the players to be “on the right side of history”, everyone knew what he meant. Only a few weeks before, Iran’s record goal-scorer and greatest ever player, Ali Daei, had his passport confiscated for criticising the regime’s repression of protests. Not long ago, I wrote that the protestors had little chance of supplanting the regime while they remained leaderless. If a potential opposition figure is to emerge, he could well do so from the world of football. Someone like Daei has the profile, charisma and esteem to carry the people with him. As Roham Alvandi, Associate Professor of International History at the London School of Economics, tells me: “Football creates national heroes. Daei, Karimi — these are household names and they have used that fame to push back against the Islamic Republic. What makes football so powerful is that it’s a team game. It’s a collective effort, and that is crucial to the emotion it elicits. It’s a group of young Iranians working together, supporting each other, to achieve a national victory. They are our boys.” In other words, it’s the tribe in action.

If you’re English, the team is an unserious reminder of who we are: prominent but fallen, vaguely disappointing but fundamentally decent; and still prone to bouts of hubris and extreme violence. For Iranians, it is a symbol of who they might be: a country that is, if not exactly secular, then at least not held hostage by aged religious fanatics, and where men and women might one day watch their country’s national sport next to each other without medieval morality police trying to prise them apart.

When the two teams battle it out, I will of course support England. But if Iran wins, I will still smile. After all, if we win, we’ll likely just progress to the next round. If Iran does, if it puts together a decent run, then the collective emotion that would spark — at a time of national protest — might be the start of something much larger. And that, in the end, is worth more than England lasting another week or so until we lose in the quarter finals — to the French of all people.