Did Russia invade Ukraine because Putin wasn’t loved enough as a child? AnnaLynne McCord, an “actress/human rights activist”, seems to think so.

Last week, she posted a poem online declaring that if only she’d been Vladimir Putin’s mum, he would have been “so loved, held in the arms of joyous light” that instead of “calling Mother Russia” and rolling the tanks toward Kiev, he’d have phoned Mother AnnaLynne. And she would have saved him from this terrible deed, “with the love only a mother can give”.

Something of the same faith in a mother’s power to create the world you want for your child, out of raw love and determination, suffuses Marlo Mack’s How To Be A Girl. A memoir of raising her transgender daughter, referred to in the book as “M”, it captures convincingly the fierce determination mothers have to lay down their lives for their children’s wellbeing.

But is love really enough to protect a child from pain? This is a complicated question. It’s not so long ago that Western mothers were encouraged to leave babies to cry, to “exercise their lungs”; in other cultures mothers willingly subject their daughters to painful FGM. Mothers in every age have faced death or worse to protect their children to their utmost power; but what we seek to protect our children from varies enormously.

Mack describes how, age four, ‘M’ said to her: “Something went wrong in your tummy” that “made me come out as a boy”. She describes M sobbing: “Put me back, so I can come out again as a girl.” How to respond? We allow or fend off suffering for our children according to a wider moral framework. And reading How To Be A Girl, it’s clear that Mack and I both love our children, but differ significantly in that framework.

In contrast to my British pessimism, she inhabits a Democrat-voting Seattle milieu, whose culture draws on a West Coast American tradition that prioritises individualism and empathy. In the influential words of 20th-century Californian psychotherapist Carl Rogers, this view argues that within each of us exists an “actualising tendency” that draws us organically toward becoming our true selves. For Rogers, all we need to “actualise” is “unconditional positive regard”.

Within the Hollywood-individualist worldview, adult violence, cruelty and aggression are caused by a lack of love and acceptance: the deficit McCord believes now drives Russian aggression in Ukraine. “If I was your mother,” says McCord in her address to Vladimir Putin, “I’d have died to make you warm.”

If I believed, like Rogers or McCord, that adult wrongdoing is driven by lack of love and acceptance, I expect I, too, would go to great lengths to provide my child with an adequate supply of “positive regard”. I expect, in other words, that I’d do much as she does: accept her child’s right to self-define. This leap of faith and validation made, she describes the relief she and her ex-husband both experience: “Before, everything was tense and contested, everything was a fight. Afterward, we were at peace.”

I expect I’d move mountains, as she does, to see that this extends beyond just the family and all the way out into the world. She even starts a playgroup for trans children, calling it the “Be-Your-True-Self Play Group”. How To Be A Girl shows the degree to which a mother’s love can reshape reality itself. And it also shows the power such commitment has, in an age where many are desperately in search of something to believe in.

For if we’ve always put together competing stories from the same facts, today’s culture is perhaps unique in the tools it offers us to project our worldview digitally into the wider world. But while you might think seeing so many different perspectives would enable greater empathy, in fact the reverse seems to be happening: evermore antagonistic filter bubbles have emerged, tranforming into communities of belief: a process Katherine Dee calls “fandomification”. How To Be A Girl recounts, in microcosm, the formation of just such a “fandom” or community of belief. Having decided to reorder reality around her child’s own sense of self, Mack is then committed to projecting this sovereign right to self-define out into the wider world. She recounts the emotional rollercoaster of telling family, then the neighbours; finding a school where her child can “be a girl”. And increasingly, these choices — all rooted in a clearly sincere commitment to holding her child “in the arms of joyous light” — come to shape and define Mack’s own life and activities, drawing her deeper into the trans-rights community of belief via the community she builds both in real life and online.

First she joins a support group for parents of “trans kids”. She starts blogging, and receives heartfelt positive feedback (as well as death threats) from strangers. She joins a local Trans Pride march, attends conferences, receives media inquiries. She starts a podcast with her child.

The story opens with her divorce and her child “coming out” as transgender; both lives are rebuilt over the course of the book, around M’s transness. But the only question she receives about the all-encompassing nature of this project is from a man she is dating, who asks her: “You’re so into this transgender thing… It’s your daughter who’s transgender, right?”

Instead of hearing this as a question about her embrace of the trans-rights fandom, though, Mack interprets this as him asking if she is in fact transgender. She dismisses this as absurd and offensive and dumps him. There’s no question of making space within the world she’s constructing for the possibility that it has an outside.

But it does have an outside. I, for example, do not believe all the evil in the world can be cured by maternal love, or indeed that humans can change sex. How To Be A Girl meant, for me, stepping out of the gender-critical filter bubble into the world as it appears to a woman who has staked not just her own identity and social world but literally her child’s body on believing gender identity is real. Doing so was like visiting the Upside Down.

Mack and I share numerous reference points on the topic of transgender rights, but are familiar with radically opposing interpretations of them. She takes at face value the (debunked among gender-critical feminists) statistic about the high risk of suicide among trans children, for example, while treating as debunked the study, widely cited in gender-critical circles, about the high percentage of trans children who desist if left alone.

Elsewhere she curates stories in a way that’s a photographic negative of the one I’m accustomed to. She notes, for example, that the pioneer of “watchful waiting” in gender-identity treatment, Kenneth Zucker, was “fired” from the clinic he ran, and the clinic itself “shut down pending an investigation of its practices”. Move the picture, though, and the optical illusion changes. Zucker was eventually paid $586,000 in damages after it was ruled that he was wrongfully dismissed; the question is whether that gets reported. Similarly, in her discussion of America’s “bathroom bill” court cases, she states that there “wasn’t any evidence” that “men posing as transgender women were infiltrating changing rooms”. But step into the other fandom, and you’ll soon hear about the evidence.

In the online battles over which facts to curate, it’s easy to forget that what’s at stake is real people, with real lives, and — as is clearly the case with Marlo Mack — real love for a real child. But this doesn’t make the escalating contest between incompatible fandoms less intense. Quite the opposite. For if there’s a common theme to the bitterest online disputes, it’s they’re rooted in questions that, somewhere at least, someone is willing to stake living bodies on.

It’s perhaps telling that Mack’s story ends with M aged 13. Transition has, up to that point, only resisted social norms; the reader is spared the far more gruelling and invasive fight against biological ones. But the blocker is inserted, and the book ends with M “excited to be growing up”. And speaking of M’s participation in a long-term study on trans kids, Mack rejoices that “Our kids would be part of a historic cohort”.

Move the picture, though, and the image changes: another way of saying this might be “conducting medical experiments on children without a control group”. Regardless, Mack is willing to stake her child’s body on her convictions — and in a post-Christian culture desperately searching for meanings, it’s no wonder competing online communities of belief take shape around such certainty. And this in turn forces us to confront the fact that disputes with real stakes in real bodies aren’t like arguments over fictional fandoms. Some battles between filter bubbles really are zero-sum.

You can read books that say reality should be re-ordered to accommodate children like M, and others that say humans can’t change sex. If it doesn’t affect you, you can murmur about the “marketplace of ideas”. But which fandom sets the rules for life in the material world is a political question, and on matters that affect the wider legal or cultural framework, there is nowhere neutral to stand.

Mack is willing to swim against the tide of biology, transform an entire legal system, hammer other people’s use of language into new shapes, for the sake of her child. And as she recounts the role her struggle plays in her own identity, as well as M’s, it’s increasingly clear that succeeding is an existential matter for both of them. This is emotive enough when what’s at stake is children’s wellbeing. But when it’s the life and death of an entire nation, everything intensifies again: the appeal of joining one or another fandom, the impossibility of neutrality, and the incapacity to think long-term about wider material consequences. 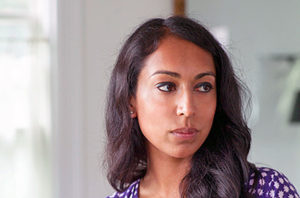 What modern feminism is hiding

As we sidle along the edge of nuclear precipice, in the world’s first very online viral war, it’s increasingly clear how easy it is to slide from mutually antagonistic online bubbles powered by love and good intentions, to a world where people call for actual real-world Armageddon on the basis of internet-powered belief. If I have any hope at all of averting catastrophe, it lies in perhaps the most powerful force there is, a force I still have in common with Marlo Mack, despite our radically competing worldviews: we love our children.

As How To Be A Girl amply illustrates, this can be turned to many uses. Loving parents determined to reorder reality around their adored child may drive radical changes across the social, legal and political fabric while ignoring serious knock-on effects elsewhere. But the love we have for our children is also the beginning of life in common.

Anyone raising children needs a community. Most mothers, when they become mothers, set about building one. We can only hope that this need we still have for one another is enough to keep our fraying public life from total conflagration — or, if the worst comes to the worst, to rebuild it from the ashes.