“For far too long, this city’s answer to every societal problem was to throw people in jail.” In an impassioned speech in 2019, the Mayor of New York City announced comprehensive reforms to the criminal justice system (CJS). “We lost generations to mass incarceration”, continued Bill de Blasio, “mostly young men of colour”.

An investment of $391 million would address root causes of incarceration by funding mental health services, housing and rehabilitation, along with a programme named “Community Based Violence Reduction”. So far, so good. But the reforms would also redefine how victims and offenders should be dealt with, with increased funding to “restorative justice” in “serious felony level cases that would otherwise result in detention and incarceration”.

Restorative justice (RJ) is described as an alternative to prison; it is a non-punitive response to criminal behaviour. The idea is to bring together the person who inflicted the harm (the “responsible person”, in RJ terminology) and the victim, often in the presence of community representatives. The perpetrator is supposed to accept responsibility for the harm inflicted and reach an agreement with the victim about how to make amends.

De Blasio’s reforms were welcomed by prison reform campaigners, as well as pretty much every liberal in the State. Alissa Ackerman, a sex crimes policy researcher at California State University and one of the few facilitators of restorative justice sessions for rape victims, has said that RJ, “allows survivors to have their pain heard and stories acknowledged, and is an opportunity for the person who caused the harm to be accountable for their actions”.

I spoke to one proponent of RJ, who asked not to be named “in case I am seen as colluding with carceral white women”. White himself, he is a newly trained lawyer in Washington DC, specialising in “replacing the racist system with a true healing process for both parties”. “Anti-rape feminists are probably responsible for more black men being incarcerated than anyone else in modern-day America”, he says. “Locking up African Americans is a product of slavery.” Ben went on to suggest “community resolution” and “non-violent strategies” to address sexual assault.

But for feminist activists campaigning against male violence, who have seen the consequences of the reforms up-close over the last three years, RJ constitutes the very opposite of justice.

Sarah, whose name I’ve changed, runs a support service for victims of male violence in NYC and is “appalled” that RJ is becoming a substitute for criminal justice sanctions. “What we are seeing is what we have seen forever”, she tells me, “which is the under-policing and under-protection for women, including women of colour. But some BLM activists are claiming that feminists calling for CJS sanctions for rape and domestic abuse is flat-out racist, because black men are overrepresented in the prison population.” As a result, she told me that “black and brown women, indigenous women … are the ones who are bearing the consequences of us not holding men accountable for their violence. They are the ones who are being murdered and raped and their abusers are walking free.”

According to the ideals of RJ, after a crime is committed the offender and the victim should meet face-to-face. The victim is not to blame or judge the perpetrator, but rather describe the impact of the offence, in order to “heal” and become “empowered”. RJ sees victim and perpetrator as equal, both in need of support and understanding. Supposedly modelled on the conflict resolution practices of certain indigenous cultures, there is much talk of circles. Healing circles are held for the perpetrator, before a sentencing circle takes place; later, there are follow up circles. The outcomes may include an apology or financial compensation. Some participants, including the victim, sign a confidentiality agreement. 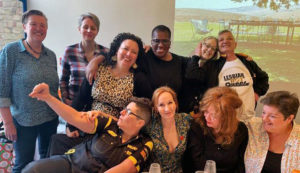 RJ is considered a suitable remedy for domestic violence, childhood sexual abuse and sex trafficking, among other violent crimes predominantly committed by men. Most of these crimes are committed against women by men known to them: male family members, partners and colleagues. “The perpetrators have worked very hard, often for years, to condition the person they are abusing to not disclose, to minimise, to protect his emotions: to protect his character publicly”, says Sarah. “They’ve been using manipulative tactics to inspire self-doubt, blame and fear, in the person they are abusing.”

And victims of this kind of abuse may feel coerced by RJ practices, which are conducted, as Sarah said, “without any understanding of the dynamics of power and control, the impact of a trauma-coerced bond, and also the amount of time and commitment that it actually takes to elicit genuine behaviour change in abusers”.

I meet with Diane, whose name I’ve changed, at a café in Harlem, NYC. She was introduced to me by her rape counsellor. Diane was seriously sexually assaulted by a senior member of her church, having been targeted and sexually harassed by him for months. “I decided to report him to the police, despite the fact that my community is rarely well served by the cops.” Diane and the perpetrator are African American. “There are too many vulnerable young people in the church, and I didn’t see why he should poison the congregation.”

The corruption of the feminist library

The perpetrator, considered to be a man of “good character”, with no criminal convictions, admitted to the lesser charge of inappropriate sexual touching, denied committing serious sexual assault, and agreed to partake in RJ.

“I was contacted by the local service that runs these things,” says Diane. “They told me it was important that we reach an agreement and rebuild trust. I was told nothing could be gained from taking him on a route where he could end up in jail. It felt like I had no choice.”

But having read up on RJ, Diane decided not to participate in it. “I was judged and blamed by the service”, says Diane, “as though I should have accepted the scraps from the table and have him say ‘sorry’ or whatever. He got away with what he did to me, and a man like that pretending to regret what he did would just be lies.”

One report, published in 2016, is often used to justify replacing criminal sanctions with RJ. It is entitled “Restorative Practices in cases of Intimate Partner Violence, Sexual Assault and Dating Violence: A Roundtable Discussion”. While it claims that RJ focuses on victims of violence and their needs, the report also ironically reveals who is actually centred in the process. One attendee is quoted as saying about perpetrators of male violence: “Do we actually blame them as a perpetrator when they were violated at a young age?” To be taken out of the criminal justice system and put in a situation where everybody is required to empathise with him — including his victim, who is forbidden from blaming or shaming him — is a violent man’s dream come true.

Like most on the Left, I believe that only the most dangerous criminals should be locked up. I have criticised the fact that the most vulnerable and disenfranchised are most likely to be in jail. But the campaign to end male violence is my life’s work. Victims have to come first. One service provider working with sexual assault victims describes reports from young survivors in California that they are “sick of going to rape circles”. She has also heard from women and girls of colour being pressured to engage in RJ instead of making police reports.

While RJ is not yet widely practiced throughout the US, it is growing in popularity in several states — and threatens to become federal policy. In its 2022 budget, the Office on Violence against Women requested $25 million, “to support restorative justice responses to domestic/dating violence, sexual assault, and stalking, and research, evaluation, and technical assistance related to such responses”.

The media consistently reports that research shows RJ is very successful. One paper, by Mary P Koss, is often cited. Koss asked victims to complete a survey about their PTSD symptoms before and after they engaged in RJ, and concluded that victims who complete an RJ process exhibit a marked decrease in those symptoms. But PTSD symptoms almost inevitably decrease as time passes after the traumatic event. Asking the victims and perpetrators of serious crimes to “hug it out and move on”, as Sarah describes it, was simply not shown by the research to be effective.

I asked several experts on violence towards women if there is any reliable data about the efficacy of RJ and was met with a resounding “no”. When I spoke to Marcia, a veteran advocate for victims of male violence, she pointed out that in cases of domestic violence, putting the perpetrator and the victim in a room together is “outright dangerous”. Perpetrators of domestic abuse, and of sexual assault, are more likely than any other offenders to repeat their crimes — often against the same victim. But the well-publicised evaluations of RJ don’t include follow-ups that measure the recurrence of violence within domestic abuse scenarios.

Marcia asked for anonymity because “right now there is so much intolerance on the Left that even those of us who are part of the Left fear retaliation if we don’t conform.” She emphasised that rape victims want their rapists prosecuted, but with the Left advocating for RJ, victims “feel that there is no movement standing behind them. They feel utterly alone.”

The idea that serious, sexual and violent crimes should be dealt with by “community leaders”, outside the criminal justice system, is shockingly naïve at best. At worst, it is re-victimising women, and giving perpetrators a free pass. Liberal cities like New York are conducting an experiment with women’s safety and lives — and ignoring whatever they have to say about it.