Christians of convenience are nothing new. As early as the second century, the sect-hopping Peregrinus milked Christians for money and fame, until they found out he was eating food sacrificed to pagan idols. But there is something shocking about the “Catholic revival” driven by downtown New York scenesters — that is, the phenomenon of attractive, highly social ketamine enthusiasts saying they are Catholic.

To be clear: there has not been a mass return to traditional Catholicism among New Yorkers. Downtown bars have not grown dusty as their former patrons marry, have children and stay in; their denizens have not renounced their stuporous ways. A few microcelebrities are going to Mass and confession; a few thousand fans of theirs post insular memes with half-remembered phrases from the Gospels; and a few brands sell things like “GOD WON’T LET ME DIE” booty shorts and the Praying “Trinity” bikini.

The aesthetics employed are tired and unremarkable: plaid schoolgirl skirts and altarpieces, bedroom photo shoots with Edwardian corseting, photos with nymphet eyes peering up from the kneeler. “Young Catholics” today, long after organised religion fell from centrality in American life, are scraping its remains; they are reviving the Catholic revival of Eighties Madonna, down to the intermammary rosary. The difference is that back then, Catholics weren’t pleased. Madonna started every “Blonde Ambition” performance with a prayer — and Pope John Paul II issued an official statement condemning it as “Satanic”, urging Catholics not to attend. Italian broadcasters refused to play the “Like a Prayer” video, and Pepsi dropped the singer from its ad campaigns.

Compare that to the Met Gala’s 2018 “Heavenly Bodies” theme: Rihanna wore a bedazzled minidress and mitre, while Cardinal and Archbishop of New York Timothy Dolan gave an enthusiastic press conference. Are Catholics so desperate for religion to have relevance that they’ll take anything, even what seems almost too superficial to even be sacrilegious?

Apparently so. According to a recent New York Times guest essay, “New York’s Hottest Club is the Catholic Church”. What is shocking about this piece is not, primarily, its subjects’ half-hearted prostitution of Catholic imagery. Rather, it is the seeming guilelessness with which its author Julia Yost, editor of the established conservative journal First Things, seems to take them at their word. Though not intimately familiar with Catholic doxa, I suppose her mission faces a challenge: how can one be a public-facing Catholic in a world almost too stupid to evangelise to?

This is not to say there are no Catholics in New York: there are, and their folkways are quite identifiable. Most strikingly, they tend to abstain from fornication, believing this is necessary to avoid eternal damnation. They generally marry and have children at relatively young ages. They generally marry, therefore, one another. I have a friend who is a recently un-lapsed Catholic. As such, his romantic life, formerly abuzz with tantalising young heathens, primarily consists of a dreary, desperate succession of false starts and mutually embarrassing denouements. He suffers, and his sojourn in Purgatory may very well be shortened for it. To those for whom “Catholicism” has provided spiritual comfort and guidance, and introduced useful restraints, we should be encouraging. As famous convert Evelyn Waugh said when Nancy Mitford asked how he reconciled his awful character and his Catholicism, “were I not a Christian I would be even more horrible”.

We should be less encouraging, however, of those who use Catholicism in pursuit of attention and in the exercise of branding: that is, as pure spectacle, exactly like everything else online. The evolution of Catholic Twitter illustrates this. At least the Weird Catholic Twitter that the New York Times profiled in 2020 presented the intriguing oddity of anonymous Ignatius Reilly types, fuming about “dumbed-down doctrine” from the rooks they’d erected in their mothers’ basements. Today, it’s bigger and more banal: young women, unequipped for Instagram stardom, post selfies outside churches they don’t venture inside, and swarms of priapic men lose their minds. Both factions have the dove and fire emojis in their handles.

In these cases, rather than a cure for vanity, Catholicism is a veneer that makes their trespasses more palatable, even giving them cause for sanctimony. The harsh prescriptions of Catholicism could well be a respite from the modern world, but one’s hardly “not of this world” when she claims it to be so before thousands of Patreon subscribers, or Twitter followers, or Instagram voyeurs. Part of the Christian message, in my enfeebled understanding, is to not parade one’s piety (“when thou prayest, enter into thy closet” — Matthew 6:6). Early in Jude the Obscure, Jude recites the Nicene creed in Latin at a pub and is met with thunderous applause, which makes him furious. Repentant and ashamed, he storms off. Can we imagine any Twitter Catholic today feeling bad about making a spectacle of their faith? Is this the end of Pope Francis?

In a striking turn, Yost’s essay doesn’t seem to question a “fake it till you make it” view of Catholicism; the idea that you should believe before performing the rituals is deemed Protestant nonsense. This might make sense in the context of a “dark night of the soul”, but it’s bizarre when applied to conversion. Historically, it doesn’t hold up: the overwhelmingly dominant account of an internal conversion is St. Augustine’s (“there was infused in my heart something like the light of full certainty and all the gloom of doubt vanished away”). And while it’s true that Protestants prioritise internal change over external sacrifice (as Luther said, “Be a sinner and sin boldly, but believe and rejoice in Christ even more boldly”), it’s not like the Catholic-adjacent, in the main, make any changes in their habits. One of the most vocal young converts I know — he’s told me, with a terrifying conviction in his large eyes, that even married men and women shouldn’t have non-procreative sex — shows up to every party with a different Tinder girl. He says they overwhelm him.

Why convert, if you don’t believe it? This is a distinctly postmodern attitude to appropriating the premodern. Sincere belief is hardly even conceivable these days. So, it seems impossible to imagine actually believing Mass and prayers and chastity are a matter of eternal life or death (as do countless Catholics to this day), or to believe it without compulsive ironising. The solution to that problem of imperfect faith could be submission to readily available religious authority. And yet, many of the loudest in this crowd espouse sedevacantism, the view that there has been no valid Pope since Vatican II, and even no valid ordinations — a theology so bespoke it would rattle the bones even of the most traditionalist Catholics. Spending their days engaged in arcane and unconvincing debates in which they copy stuff from Reddit and paste it onto Twitter, they bear an uncanny resemblance to the DSA cretins for whom they bear such scorn.

I suppose this is how we do politics now that politics is dead: the near entire retreat to the imaginary, a casual contrarianism committed to nothing besides its own ability to shock. Yost claims that “members of a small but significant scene are turning to the ancient faith in defiance of liberal pieties”. The choice of Catholicism is, of course, not random. Pretending to embrace that rapidly dying faith, led by an octogenarian Argentine with one lung, is an expression of antipathy towards the mainstream status quo and its sacred cows. There is apathy here, too. The vague conservatism of the “Catholic revival” does not reflect commitment to improving society or even their own souls; instead, it is merely confused agitation born of obsession with a liberal class they imagine to be composed solely of Jezebel writers — a politics, faith, and worldview with all the conviction and all the consistency of one impetuous toddler angry at another. 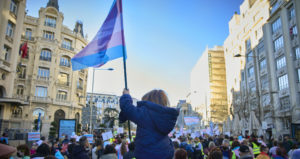 It may be true, for the more sincere among them, that the draw of Catholicism comes from a painful and desperate place. Young people, particularly in the post-Covid years, feel adrift and alone, and may well feel, as Waugh did a century before them, that the choice is between “Christianity or chaos”. The draw is half a longing for rules of any sort. (Is it any coincidence that many of these new Catholics espouse Ray Peat’s Eighties nutritional code, with its inane admonitions against pineapple and paeans to hypnagogic ice cream?) But this so-called traditionalism betokens little more than a hysterical obsession with ever more arcane, ever more irrelevant concerns.

Another part of the draw, I suppose, is general dissatisfaction with the fuzzy, listless conformism of the post-Obama years; it’s almost too banal to observe that the milestones of adult life are gone, the union job, marriage, family home, children, all so easily available to an earlier generation. As one young Catholic podcaster tells the author of the New York Times essay: she didn’t like how everyone told her to get a job when what she really wanted was a family.

But wait: “get a job” is pretty reasonable advice for aspiring mothers. If you don’t have a trust fund, a job with health insurance is probably the single biggest facilitator of having children in America. You don’t have to become a provocatively Right-wing traditionalist to breed. A single stroll through Park Slope makes very clear that the liberal elites, in fact, love children. Throw a stone, and you’ll find a secular, Dem-voting female professional with a husband, children, and a life far more similar to that of any given parishioner than any on-trend “Catholic”. It’s not “choosing the better part” to be an unemployed podcaster, nor does self-marketing through semi-nude photography on social platforms compare to sitting at the feet of Christ.

Young New Yorkers are reacting to modernity via a touristic experiment with the American Right. But, with rare exceptions, they haven’t stopped fornicating; they haven’t started forgoing coke so they can wake up for Mass on Sunday. Instead, the fixation with “post-liberalism” or “post-feminism” or “Catholicism” is superficial: it reveals little more than a narcissism of small differences. Endlessly rejecting “liberal pieties” is easy; what’s difficult is taking a cold and curdling look at one’s own life.