“Ever get the feeling you’ve been cheated?” snarled Johnny Rotten as he simultaneously left both the stage in San Francisco and the Sex Pistols. Liz Truss took the opposite tack in her speech to Conservative Party Conference. Pledging to “stay the course”, she concluded by declaiming: “That is how we will build a new Britain for a new era.” It was a peroration so underwhelming that her loyal audience were unsure whether to politely applaud or launch into the obligatory standing ovation that follows the speech’s conclusion. Only the Prime Minister’s silence, and nervous smile, signalled this was the end.

It was Mario Cuomo who said that politicians “campaign in poetry, but govern in prose”. Truss’s speech was confirmation that while she campaigned in prose, she is committed to governing in boilerplate. All the political clichés were there: “hard choices”; “the status quo is not an option”; “grow the pie”; “I get it”; “tough times”, and the hoary old favourite “on your side”, clunkily delivered as “on their side”. The last was the giveaway: this wasn’t a speech aimed at the country but at the conference hall. The audience, even though it was bulked out with passing randoms because of the rail strike, was willing Truss on.

And she gave the hall what they wanted — her greatest hits. Deregulation. Lower taxes. Higher defence spending. An attack on Putin. An attack on the enemies within: “They taxi from north London townhouses to the BBC studio to dismiss anyone challenging the status quo. From broadcast to podcast, they peddle the same old answers.” But there was no substance. None of the “hard choices” were specified or stepped out. Why haven’t houses “been built where they are needed and wanted”? What are the “barriers to growth” that will be lifted?

It was a short speech, lacking the tour d’horizon that is normally central to a leader’s address. It was one which raised questions without answering them. It plagiarised Keir Starmer – when the Prime Minister said “I have three priorities for our economy: growth, growth and growth”, she was shamelessly lifting from the Labour leader who, in July, had said “We need three things: growth, growth, growth”.

More substantially, she trebled down on her Chancellor’s “mini-Budget” — justifying it as a response to the “drift and delay” she had inherited, though failing to mention that the Tories have run Britain for the last 12 years, and that she had been in the Cabinet for three-quarters of that time. Truss left her audience in no doubt that she was appalled by her government having to levy the “highest tax burden that our country had had for 70 years”, but was apparently unable to name who was responsible for these punitive levels of taxation.

The classic illustration of the Yiddish word “chutzpah” used to be the man who murdered his mother and father and then threw himself on the mercy of the court as an orphan. The Prime Minister, a self-avowed fan of Margaret Thatcher, surely supplanted him when she talked about the effects of a failed economy: “I know what it is like to live somewhere that isn’t feeling the benefits of economic growth. I grew up in Paisley and in Leeds in the Eighties and Nineties. I have seen the boarded-up shops. I have seen people left with no hope turning to drugs. I have seen families struggling to put food on the table.” Never has an attack on Thatcherism been so roundly supported by Tory conference.

Yet in a sense, Truss has learned the crucial lessons of Boris Johnson’s leadership: that not only has there been an integration of politics and celebrity, but that the narrative forms of soap opera also now frame politics. Politicians can, like the stars of daytime soaps, live in a perpetual present; what they said yesterday has no relevance to what they said today and what they will say tomorrow. Character isn’t fate — it’s reinvented daily.

The difficulty is that the bond markets don’t take such a post-modern view. They price uncertainty though long-term gilts, and it trickles down to wallets and handbags across the UK through mortgage payments. In her conference round of interviews, the Prime Minister responded by saying that interest rates are rising globally and, anyway, they are a matter for the Bank of England rather than the government.

It’s a view. But it seems unlikely that Andrew Bailey will be cursed over breakfast tables rather than Liz Truss. If, as is likely, the increases in mortgage repayments are at least £200 a month, then those costs will dwarf the financial support given to households by the energy price cap. “Black Tuesday” — when so many mortgages were simply withdrawn from the market — may come to loom as large in 21st-century UK politics as “Black Wednesday” did at the end of the last century. And with the same effect. 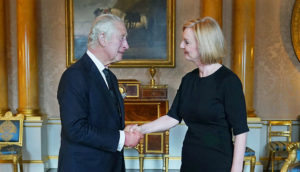 It is often said, not least on the Left, that the Labour Party is used to spending long periods in opposition. There were four election defeats before New Labour were elected in 1997; there have been four election defeats since David Cameron ousted Gordon Brown. Less frequently observed is that when the Tories lose, they also stay out of power for a while. Harold Wilson beat Ted Heath in four of the five general elections they fought. Tony Blair won three terms in a row. Tory defeats, though less frequent, are no less devastating. With Labour poll leads ranging from 33% across the country to 38% in the battleground “Red Wall” seats, the question is not whether Starmer will be the next Labour Prime Minister, but how big his majority will be.

The longer the general election is delayed, the worse the defeat is likely to be, particularly amid the drumbeat of rising mortgages. Yet, with a working majority of 71, the Tories cannot be thrown out of office. The dream scenario whispered about at Tory conference was about a change of rules that would allow a vote of no confidence in Truss and a new leader by acclamation. Yet, with Suella Braverman describing the ditching of the higher rate tax cut as a “coup”, who can envisage a one-candidate election? And what about Boris Johnson who surely hopes for a Churchillian return?

There is a lot of ruin in a party. And it is beginning to look as though the Tories are determined to find out exactly how much there is.