Does Sir Keir Starmer know there’s a war on? Last week the Labour leader visited a country literally on the doorstep of Russia. Speaking to a Times journalist at the biggest military base in Estonia, a Baltic state with every reason to fear the intentions of its aggressive neighbour, he had a very important message. Employing the forensic skills that made him a QC, he homed in on the most significant issue of the day: “Trans women are women”, he declared. “And that is not just my view — that is actually the law”.

It actually isn’t, but let’s leave that fact aside for the moment. Is this man stupid? A couple of years ago, I wouldn’t have said so. A couple of years ago, I voted for him in the Labour leadership contest, not because I thought he would be brilliant, but because I imagined he would at least be adequate. My expectations weren’t high, but they’ve still been disappointed. Last week he showed himself to be either stupid, or so committed to an extreme ideology that he has lost sight of its disastrous impact on women.

What did his hosts make of it, I wonder? Earlier in the day, Starmer had a meeting with the Estonian defence minister in Tallinn, around 230 miles from St Petersburg, the hometown of Vladimir Putin. I’m just guessing here, but I suspect Estonia’s top brass have more pressing worries on their minds than the hurdles faced by trans-identified males in North London who want a gender recognition certificate. How they must have applauded when Sir Keir’s trip created headlines about wanting greater “respect and dignity” for transgender people. And in the week of International Women’s Day, too. All this reveals quite starkly where the Labour leader’s priorities lie.

What is really terrible about Starmer’s “intervention” is that it feels deliberate. Two members of his shadow Cabinet had stumbled over the “what is a woman?” question earlier in the week, so it was entirely predictable that journalists would confront him with it. He could have said that it wasn’t the time or the place to talk about domestic politics. He could have responded “adult human female” and left it there. But he didn’t. He had his answer ready — and it could not have been more confrontational. There can be little doubt that this is Starmer throwing down the gauntlet. In the past he has appeared shifty and uncomfortable when asked questions about biology, spouting nonsense about women’s bodies while looking like someone taking part in a hostage video. No, he told Andrew Marr, it isn’t right to say only women have a cervix. (I once had to have treatment for a pre-cancer of the cervix. I can assure you, and the leader of the Labour party, that all the patients at the clinic were women.)

But last week, Labour couldn’t hide any longer. On Tuesday, the shadow women and equalities minister, Anneliese Dodds, tied herself in knots on Woman’s Hour when asked to give Labour’s definition of a woman. She began by suggesting “there are different definitions legally around what a woman actually is”, as though she was a hapless barrister, trying to pacify a prickly judge. Then she said it “depend[s] what the context is”, without explaining the context in which a woman might not be a woman.

Next she tried a blatant appeal to emotion: “You know, there are people who have decided they have to make that transition. You know, I’ve spoken with many of them. It’s been a very difficult process for many of those people. And you know, understandably because they live as a woman, you know, they want to be defined as a woman.” Yes, but that doesn’t mean they’re exactly the same as someone born a woman, does it? The next day, the shadow home secretary, Yvette Cooper, dodged the question by declaring she wasn’t going to go down that rabbit hole, prompting mocking cries of “what is a rabbit?” (Does that depend on context, too?)

Then it was the turn of Harriet Harman, veteran Labour MP and former acting leader of the party, who faced the question in a wide-ranging interview with Sky’s Sophy Ridge. My spirits rose when I saw the headline: “Labour has a woman problem”. But it turned out Harman was talking about the fact that the party has never had a woman leader.

Later in the interview, using the awkward language Labour MPs habitually adopt when talking about this issue, she came out with this belter: “So far as I’m concerned, women are women who are born women, but women are also women who are trans women.” By Harman’s logic, the party’s first woman leader could be a man. 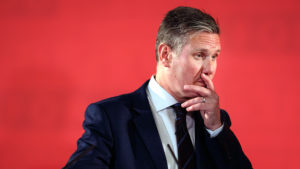 Where it all went wrong for Labour

To be cruelly frank, women are being gaslighted. Labour’s leaders say they believe in single-sex spaces, but what does that mean when they also insist that trans women are no different from natal women? Starmer’s own position is a statement of the law as he would like it to be, rather than as it actually is, as the barrister Naomi Cunningham pointed out at the weekend. Cunningham’s area of expertise is the interaction between the 2004 Gender Recognition Act and the 2010 Equality Act, both of which were cited by Starmer during his interview in Estonia. Asked whether the law says that trans women are women, her admirably concise answer was: “No.”

It is true that the GRA can change some people’s legal sex, but it obviously doesn’t change biological sex; it can say they should be treated as women for most legal purposes, but allows that a trans woman can be refused access to a female-only space if there’s a good reason.

This goes to the heart of the mess Labour has got itself into. Starmer and his colleagues have confused a polite fiction — “trans women are women” — with reality. A piece of legislation that was passed almost two decades ago to make the lives of transgender people easier is now being used in a way that was never intended, making safeguarding of vulnerable women and girls difficult if not impossible.

You might think someone who used to be Director of Public Prosecutions would know that. You might think Starmer has first-hand experience of how predatory men operate, and be aware that they pretend to be all sorts of things — from harmless taxi drivers to trans women, on some well-documented occasions — to get access to potential victims. His staggeringly ill-judged interview in Estonia suggests otherwise. Back in the UK, women feel utterly betrayed — and many of us are wondering if we will ever be able to vote Labour again.