It may have come to your attention over the last few days that there was a lunch. The events of that afternoon have already been covered in detail, and the joyous photographic record shared widely, so I will instead focus on what led to that glorious, raucous afternoon — and the hyperbolic backlash that followed.

It was late August 2019 when a message popped up in my Twitter inbox from J.K. Rowling. I had noticed that she had begun to follow me on Twitter a few months earlier, along with a number of feminists, and I was delighted to hear from her.

“I’ve just seen that you’re in contact with Magdelen Berns,” she wrote. Berns was a young lesbian who, after being silenced at her university, made YouTube videos tackling the absurdity of transgender ideology. She was popular, hilarious and informative. I say was; Berns, in her 30s, was dying of a brain tumour. I planned to visit her at a hospice in Edinburgh and had put a call out on Twitter to any women who wished to send her a message.

I knew that she would be delighted to hear from Rowling. A few weeks beforehand, during an excitable telephone conversation, she had already told me that “JK is following me!” Berns was thrilled to have her work recognised by one of the most famous and successful women on the planet, and I was thrilled to carry her message.

I kept in touch with Berns after my return from Edinburgh, until she died in September. Rowling and I also stayed in contact, bonded by our feminism and our “simply not having it” attitude. Then, three months later, Maya Forstater lost her job for stating that sex is real. Rowling was furious, and her tweet to that effect has become the stuff of legend. #IStandWithMaya, she said, and all hell broke loose. On one side, British women were galvanised into action. On the other, the fact that this wealthy, powerful, successful and uncancellable woman was not only expressing her opinion, but doing so in public, inspired a tsunami of abuse. For the crime of having perfectly reasonable views on women’s sex-based rights, Rowling was harassed on social media and beyond. There were death threats, rape threats, doxxings, and wild accusations. Each time, they became more and more extreme, and even, in some places, normalised and justified.

During this period, many other feminists came in for the same treatment, but no one with a profile that came near to matching Rowling’s. Under fire from extreme trans rights activists, a core group of us formed a bond. It was, however, not formed in defiance of them, but around the beating heart of our movement; for women, for girls, for our rights and our protections, and against misogyny and male violence, whatever form that eternal chimera is currently taking.

Here’s the rub. The kind of threats and abuse sent to Rowling, to me and to others are designed to make us feel isolated, afraid, alone. Patriarchy is all about dividing women and ensuring we don’t share our experiences. Why? Because when women talk, we realise our experiences are quite similar when it comes to male violence and abuse. We realise that all the gaslighting, all the lies told to us, have a common thread. We realise that the guilt, blame and shame of what happened should not belong to us, but to the perpetrators.

And when we bond like that over our common experiences, in what some of us still call “sisterhood”, we are powerful beyond measure. We support each other, emotionally and practically. We organise, agitate, fight. The haters try to stop us. But what they don’t realise is that being under fire is a recipe for solidarity.

No woman is safe from this kind of attention. Martina Navratilova has a long history of being a very public ally to everybody in the LGBTQ rainbow, and yet was still subjected to foul abuse from radical trans rights activists. What was her sin? She questioned whether biological males should compete against women in sports. But the more they came after us, the closer and more supportive our coven became until one day, another DM dropped into my inbox, again from Rowling, this time to a dozen or so of us. It was an invitation. To lunch. 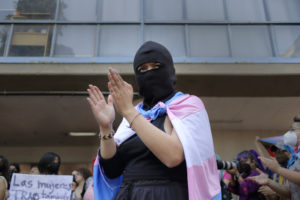 Like many journalists, I love a good lunch. It’s not like the old days where it would be a three-bottle job, beginning at 12:30 after you’d filed your copy, and ending with the restaurant chucking you out at 5pm. But there is something extremely decadent about getting a bit lashed of an afternoon, with a convivial group consuming fine wine and food. And that is exactly what happened last Sunday.

The problem? We were all women, and to make matters worse, feminists. The icing on the cake was that Rowling was the host, and her guests all known for standing up against extreme transgender ideology and for women’s sex-based rights. That was bad enough, but the fact that we got up to hijinks, and had the temerity to laugh, and drink wine, and eat pasta, and have a bloody brilliant time, and do it on camera, was simply too much for some people. Can you imagine? The cheek of it.

I’d had enough experience of these things to know, beforehand, that there would be some sort of reaction, but I was genuinely surprised by the scale of it. Several national newspapers, radio programmes and talkshows covered it as some fascinating event rather than just ladies who luncheon. I was not surprised, however, by the sheer warmth of many feminists, and even a few men, who lit up social media with their good wishes for us. Nor was I surprised by the fact that there was a backlash from the blue-fringed brigade; the anger and pure spite was palpable, and once word got out that we witches had got together and had some fun, the pile on began.

First, were the handmaidens. One woman, a well-known author with pronouns in her biography, suggested that we were “patting ourselves on the back for solving feminism because of the mutual dislike of trans people”. Then another woman, a comedian, again with the pronouns, kicked off big time, saying that she had had a “mad, angry cry about the photos of J.K. Rowling at the TERF gathering. It’s disgusting how members of our own community can be so hateful”. And of course, Twitter in all its glory was soon awash with the hashtag #MadAngryCry.

Then the boys joined in. Craig Murray, who describes himself as a historian and human rights activist, seemed to think that our event was disrespectful to a man accused of the rape and sexual assault of two women. “While [Suzanne] Moore was knocking back expensive wine in a shit venue with fellow “victim” J. K. Rowling, Assange was entering his fourth year locked in a tiny cell amongst convicted terrorists.” One wonders whether it is only feminists who should refrain from eating until Assange is free?

The corruption of the feminist library

Hen parties, make-up salons, hair dressers, maternity wards are all permissible places for women to hang out, but actual feminists meeting? Those women that refuse to back down when the patriarchal boot is on the collective neck? No chance.

Some of the intensity of this backlash is no doubt driven by jealousy — not just of us having lunch with the stupendous Rowling, but of how much we made each other laugh. Contrary to prejudicial stereotypes about feminists, there is no shortage of funny women in our midst. As can be seen in the countless photos taken at the lunch, we teased each other in the most irreverent way, such as deciding that Rowling was only 66% straight. I mean, come on: very few heterosexual feminists prioritise the bullying and debasement of lesbians by trans activists and other misogynists as she does.

When the photos were tweeted, to great merriment, I suddenly found myself accused of being some type of sexual predator, out to convert our Queen. In response, Rowling wrote: “Appalled to learn that @bindelj sexually harassed me by (checks notes) making me laugh while lunching. I’ve naturally consulted lawyers, but they say my case is likely to fail at trial due to a legal loophole known as ‘this is bullshit’. Devastated. Please send more fake concern.”

And yet for all that we laughed, it isn’t easy being on the receiving end of so much vitriol and hatred, no matter how much support, or wealth, or sisterhood you have. People seem to think that privileged women such as Rowling have no feelings, no ability to feel pain, and no concern for their safety. But this is sociopathic behaviour, sadistic even — laced with a desire to put women on the receiving end in a position where we cannot win.

Well, on that Sunday afternoon, with that group of women, and the friendship and solidarity in sisterhood in the air, we won. Trust me: we had the hangovers to prove it.