When the Irish government published a video to commemorate the centenary of the Easter Rising in 2016, there were a number of glaring absences. The 90-second clip made no mention of its combatants or the bloody crushing of the rebellion by the British army — including the execution of 16 rebels. Instead, the video led with footage of the Queen, David Cameron and a group of twenty-somethings clubbing.

Within a week, amid widespread criticism, the video disappeared and the Government’s official ‘Ireland 2016’ website was quietly taken down — though not before it emerged that it had used Google to translate The Proclamation of the Irish Republic and historian Diarmaid Ferriter had labelled the video “embarrassing, unhistoric shit”.

Four years later, the Irish Government was similarly humiliated when Leo Varadkar, Enda Kenny’s replacement as Taoiseach, revealed his plans to commemorate the Royal Irish Constabulary (RIC) and the Dublin Metropolitan Police (DMP) with a state ceremony. Not only were the RIC formed as the armed wing of British imperialism in the 1800s, used to protect British landowners during the famine, but many viewed the announced commemoration as an attempt to memorialise the infamous Black and Tans — thugs often recruited from British prisons who joined the RIC to violently hunt down Republicans during the early 1900s. In response to Varadkar’s plan to give “right and proper” status to the “police officers who were killed”, the Irish public sent the Wolfe Tones to the top of the charts with Come out Ye Black and Tans.

More than anything else, the past decade of Irish centenaries has shown how memorials and commemorations can be tense affairs. To say the Government in the south hasn’t done well when it comes to remembering is an understatement. And as Ireland prepares to commemorate 50 years since Bloody Sunday this weekend, that doesn’t look like changing; if anything, nowhere is the squeamishness with which Irish politicians approach the past more present than in its current Taoiseach, Micheál Martin. 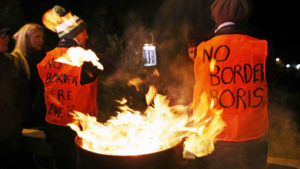 Earlier this month, Martin spoke at a conference commemorating the handover of Dublin Castle to the newly elected chairman of the Provisional government, Michael Collins. Addressing an audience at Trinity College Dublin, Martin said that “every state has a right to remember and honour its founders and the traditions which both won the support of the people and secured progress”. He then warned that “we live at a moment when attempts to distort and manage public histories are becoming more and more serious”. Calling on the need for “independent historical scholarship”, he lamented that “ours is a world where disinformation and populism are a very real threat to the sustainability of free democracies”.

Such charged language distinguished the framing of this commemoration from those that came before. This was more than a matter of bluster and ineptitude; here we had a blatant display of revisionism, one designed to bolster the Taoiseach’s anti-democratic agenda.

Far from a declaration of a new, free Ireland, the treaty that Collins handed over at Dublin Castle in January 1922 was signed on the condition that the members of parliament in an Irish Free State swore an oath of allegiance to the British Crown: Collins and others were forced to “solemnly swear” to be “faithful to His Majesty King George V, his heirs and successors by law” and agree membership of the British Commonwealth.

As well as selling out the six counties in the North, the brutal civil war between Republicans following the handover was based on the popular notion that the treaty had been a means for British establishment figures to use Irish heads of state to quell what had been a populist rebellion. A century later, as Irish politicians use the event to rail against “populism” and “disinformation”, some might wonder how much has changed.

Indeed, last September, Irish president Michael D. Higgins caused a stir by being the only southern politician who refused to engage in the historical whitewashing of partition. When invited to attend a church service in Armagh in the North to commemorate the “formation of Northern Ireland”, Higgins declined as the service was not “politically neutral” and failed to acknowledge the “coercion” involved in that moment of history.

What if Ireland were united?

He clearly struck a nerve: DUP leader Sir Jeffrey Donaldson responded by calling Higgins’s refusal a “retrograde step”, while Ruth Dudley-Edwards described Higgins’s “bigotry” as being inspired by the southern Irish populace’s “latent Anglophobia”. Many unionists are equally up in arms at the fact that Higgins is billed to be attending the Bloody Sunday memorial this weekend.

And should we be surprised? As the past decade of anniversaries has shown, how the Irish political elite approach their nation’s collective history has always mattered. But at a time when a majority of people are in favour of holding a border poll in the next five years, and growing support for Sinn Féin shows that the issue of Irish unification is here to stay, the use and abuse of the past carries even more weight.

Since 1998, Irish politicians have been able to seek refuge in the stipulations imposed by the Good Friday Agreement: a border poll cannot be officially called unless the Secretary of State in the North is convinced that it “appears likely to him that a majority of those voting would express a wish that Northern Ireland should cease to be part of the United Kingdom and form part of a united Ireland”. In essence, you have to win before you are allowed to have a go.

A common refrain among politicians to those calling for a border poll has been the assurance that no one wants to return to the violence and chaos of Northern Ireland during the Seventies and Eighties. Yet the Irish political elite is not engaging in a war on history simply because they fear the return of the Troubles — but because reconciling with the past also involves taking stock of the present.

Perhaps more than anything else, unionist and loyalist forces in the North wish to avoid a border poll because it would call into question their political legitimacy and reveal the democratic deficit in Northern Irish politics. The power-sharing arrangement imposed by the Good Friday Agreement has long proven to be a block on political engagement, with Stormont disbanded for years at a time because of petty spats over flags, language and green energy bills.

For the south, meanwhile, a border poll would mean southern politicians coming to terms with years of ignoring the discriminatory nature of partition. As former Republican prisoner Danny Morrison wrote in the Irish Times last week, “Fianna Fáil and Fine Gael deliberately attempt to conflate the Republic of Ireland with Ireland, to create the perception that the Republic of Ireland is the nation and that the North is ‘other’”. (The Irish elite, ever keen to suck up to their Brussels counterparts, are also aware of the dislike with which the EU views anything with a whiff of nationalist sentiment.)

So calling a border poll would be a painful process, one in which the “disinformation” condemned by Martin would be exposed as having coloured much of the establishment’s revisionist representation of Irish history. But it might also be inevitable; how long they can avoid their history remains to be seen.

The Irish author Colm Tóibín recently told British readers in the Guardian that people arguing for a united Ireland in their lifetime were engaging in “mystical blather”. It was a typical defence of the status quo — an attempt to pose the prospect of change as unreasonable, idealistic or as dreams of ‘sunny uplands’.

But a hundred years on from a treaty forced by British rule and opposed by Irish men and women — which not only went on to spark civil war but decades of unrest and political uprisings in the North — is such complacency wise? For too long, Ireland’s political elite have busied themselves rewriting history at the expense of addressing the present. As they lumber from one display of incompetence to another, it’s only a matter of time before it catches up with them.