The story of a sixth-former being hounded out of her private girls’ school for alleged “transphobia” was reported last month, but might not have been so widely noticed had JK Rowling not tweeted her disgust. It gained yet more attention when Owen Jones also went on Twitter: “This ‘story’ — claiming 60 girls drove a girl out of school for ‘questioning trans ideology’ — doesn’t include their side of the story or even name the school. I want to speak anonymously to those girls for their story, so please RT!”

Kate, the pupil in question (whose name we have changed), contacted me on social media. She had seen my condemnation of Jones’s attempts to, in my view, discredit the story and wanted to tell it in her own words. In any case Jones was wrong: her school couldn’t be named for legal reasons — and the children couldn’t be identified. So we meet in central London. She seems wise beyond her 19 years and remarkably articulate: she gives the impression she reads Dostoevsky and Socrates for fun.

“Announcing it via Twitter — that was vindictive,” she says of Jones. “Finding the school — think how much harm he could do to its reputation. If it was ruined, how could it do better in future? He seemed convinced it was just a case of high school bullying that was contrived by a bigot to victimise herself.”

She goes on to tell me what happened, pausing often to compose herself. A politician who sits in the House of Lords visited the school to give a talk on their campaigning for LGBT rights. It was compulsory for the Sixth Form to attend. This peer was dogmatic from the very beginning, claiming that trans people are denied human rights and suggested that the House of Lords is shot through with bigotry. Kate was “disconcerted” by the speaker’s “righteous denunciation of her peers as irredeemably transphobic”. So, after careful consideration, she decided to ask a question relating to how the definition of “woman” differs between critical theory and biological reality. When Kate asked about how to achieve productive consensus when there are such opposing views, the peer accused her of reducing the issue to semantics. “I said, ‘I respectfully disagree’, and thought that was the best place to leave it.” At this point, though Kate didn’t realise it at the time, one of her fellow pupils ran out the room crying.

Afterwards, Kate heard several students talking about “transphobia”, and saying that Kate had caused them real harm. Later, the allegations grew: some claimed Kate had caused trans students to consider suicide. When she went to collect her bag from the locker room, she encountered the head girl, who treated her coldly. Then, a number of students circled her and started calling her names: Nazi, bigot, fascist, transphobe, homophobe, racist, cunt.

“I felt their spit on my face,” she says. Shaking, she broke out of the circle and ran, only to fall to the floor. One student, in distress, ran after Kate to ask if she was OK. And later, the Head of Sixth Form asked the students who had berated Kate: “How could you do this?”

But Kate’s ordeal was far from over. Arriving at school the following morning, she found her desk covered in printouts of trans flags, each emblazoned with the text: “Trans right are human rights”. The day after, the other sixth-formers staged a spontaneous “Trans Day of Visibility”, some students coming to school dressed in pink, white and blue, the colours of the trans flag. No one had told Kate about it. How the Guardian enables Owen Jones

An investigation was opened into the alleged bullying of Kate, and the Deputy Head interviewed several of the students, including Kate. Then, a few days later, Kate came into school only to overhear her favourite teacher apologising to her fellow sixth-formers for focusing on Kate and allowing others to be distressed by her “terrible, hateful behaviour”.

Later, a second investigation was launched, “to justify the reaction of the girls”, says Kate — one that focused on her allegedly “‘provocative’ history, going back five years”.

Feeling distressed after what she felt was public condemnation, Kate self-harmed on school premises. She was then asked to stay home for several weeks, “because I was seen as a danger to myself and to other students”.

Eventually, Kate returned to school. She was keen to get on with her studies; she’d previously had to retake her GCSE year because she’d been hospitalised with anorexia. However, she was made to sit in the library, separate from other students, “just surrounded by books and my own thoughts”. The isolation had a terrible impact on her mental health. “I started to see food as completely unappetising again.” But when she asked to go back into school properly, she was told that she had “distressed” the students for too many years, when all they had done was look out for her.

Then she decided she’d had enough. She cleared her locker, walked out of the school, and never went back. Kate is continuing her studies online and is on course to begin university by the time she’s 21. “I will feel as if I’m a mature student,” she laughs. 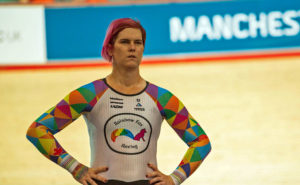 It’s clear that some of Kate’s views on trans issues have developed as a result of her personal experience of anorexia. “I couldn’t help but hear the anorexic mentality reverberate in conversations of gender dysphoria,” she says. “Both aspire to reach an idealised, elusive form of the self. Both are driven by a desire to control one’s reality.”

She had experienced some “very traumatic health incidents” as a teenager; after spending a year in hospital, aged 13, being treated for her eating disorder with other girls from very different backgrounds, Kate re-entered the world “fundamentally changed”. Her school had also changed. It had become involved with Stonewall and there were several girls identifying as non-binary or trans. But the school had always been more liberal than establishment, and Kate was fond of many of her teachers. It was these positive experiences that made her feel she could question, out loud, whether she was a “bad person” for doubting trans ideology.

“Why would they turn on me so viciously?” Kate wondered.

“I’m not denying the validity of medical transition as a means to stifle anguish,” she adds. But there is a difference, says Kate, between transitioning to control one’s perception of oneself, which relies on external social validation, and doing so to alleviate profound psychological distress. “In accepting the constraints of biological reality you’re assuming both a burden and responsibility. I empathise with that. It must be unfathomably difficult.” During the height of her anorexia, she felt that “I would kill myself if I gained weight”.

Kate told me didn’t know what she wants to do with her life, but that she “can’t wait” to get to university. She is nervous, though, about entering another place of education in today’s climate. She fears that, these days, “there is no forgiveness for those branded with the damning suffix of ‘–phobic’”.