The year was 1989. It was only when Salman Rushdie took his seat at the memorial service that the lethality of his predicament sank in. The remembrance for the writer Bruce Chatwin on Valentine’s Day was held at a Greek Orthodox Church in Bayswater. The grand building filled with holy smoke, melodious clerical babble, and half of literary London. Rushdie sat next to Martin Amis.

“We’re worried about you,” said Amis. “I’m worried about me,” responded Rushdie. Sitting in the pew behind was Paul Theroux. “I suppose we’ll be here for you next week, Salman,” he chuckled.

Rushdie remembered the moment, funny in the queasy-hysterical way narrowly not being hit by a car is funny, in his 2012 memoir Joseph Anton. After Friday’s attack on the author, which may cost him an eye and possibly more, the book is charged with new meaning.

Paparazzi and journalists began to follow Rushdie into the church. Hours before, Ayatollah Khomeini had issued his fatwa: “I inform all zealous Muslims of the world that the author of the book entitled The Satanic Verses… and all those involved in its publication who were aware of its content are sentenced to death. I call on all zealous Muslims to execute them quickly.” Fleeing the press, Rushdie was spirited away by Alan Yentob in a BBC car.

Aged 40, Rushdie’s life was split into an unwanted second act. “How easy it was to erase a man’s past and to construct a new version of him,” he recalled, “an overwhelming version, against which it was impossible to fight.” Several builders collaborated to construct the new Rushdie. There was the Ayatollah, a man who had used children as mine-sweepers in the Iran-Iraq war, and who marked the tenth anniversary of the Iranian Revolution with his fatwa. There were the Muslims who rallied and rioted against Rushdie in France, America, Norway, Bangladesh, Thailand, Sweden, Pakistan, Australia, Turkey, and the Netherlands. And there were the governments who banned The Satanic Verses in two dozen countries. As he watched all this in hiding, the author “imagined the Great Pyramid of Giza turned upside down with the apex resting on his neck”. 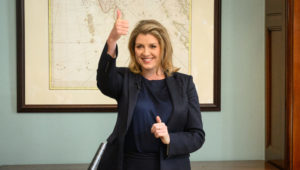 Penny Mordaunt is hard to read

The British builders were generally more subtle, though no less insidious. One of the very first calls Rushdie received after the fatwa was from Keith Vaz, the MP for Leicester East. Vaz described what was happening as “appalling, absolutely appalling”. He promised to support Rushdie. A few weeks later, Vaz was one of the main speakers at a demonstration against The Satanic Verses, describing the event as “one of the great days in the history of Islam and Great Britain”.

But MPs need votes more than they need writers to have artistic freedom. Joseph Anton is full of moments when they let Rushdie down. Max Madden, the Labour MP for Bradford West — Bradford, the city where copies of The Satanic Verses were crucified and set alight — suggested that Rushdie add an insert into his book allowing Muslims to explain why they found it offensive.

Offensive. That was the main charge against Rushdie in Britain. The five years it took to make a novel sing could be reduced to one slander. On the political Right, Rushdie had already caused offence. In the Eighties he had denounced “the Augean filth of imperialism” and described the British police as representatives of “the colonising army”. And, yes, Rushdie had praised the Iranian revolution: “We may not approve of Khomeini’s Iran. But the revolution there was a genuine mass movement.”

Writers at the Telegraph and Spectator, as well as members of Margaret Thatcher’s government, were patriotically scandalised that a foreign power could order the death of a British citizen and try to get his book banned. Not in this blessed plot; not in our England, mate. But it was still a cause for tickily spite that Rushdie, as Charles Moore would later reflect, “used to attacking whitey with impunity” was “suddenly seeking whitey’s help”.

There was dark, malicious glee. Auberon Waugh wondered “just how much we should exert ourselves, as deeply stained white imperialists, to protect him from his own people”. Sir Hugh Trevor-Roper said he wouldn’t be bothered if British Muslims decided to “waylay” Rushdie in an alleyway and “improve” his manners. Sir Stephen Spender, whose youthful communism was a distant memory, wrote in the Spectator of Rushdie: “It is mass immigration that has got him into the trouble in which he now finds himself…” Wasn’t it ironic that an immigrant like Rushdie, born in the twilight of the Raj before coming to England for boarding school, had become the hate figure of immigrants himself? “The liberals made their multicultural bed,” crowed Sir Peregrine Worsthorne, editor of the Sunday Telegraph. “Now they must lie on it, along with the rest of us.” Norman Tebbit spoke for them all when he described the novelist as an “outstanding villain”.

In Joseph Anton, Rushdie recounts this without much bitterness. Being cast as the “uppity foreigner” was something he expected. Neither is he particularly saddened to find successive Archbishops of Canterbury, and Prince Charles, respond tepidly to the fatwa. The Prince of Wales reportedly said he would not support a writer who had insulted the “deepest convictions” of Muslims. He was the defender of more than one faith now. More surprising, though, was the reaction on the Left. It was one thing for the Daily Mail to label Rushdie as “unattractive, small-minded, arrogant, and egocentric”. But what did it mean for George Steiner, the great Cambridge polymath, no roast beef of old England merchant, to launch sustained, remorseless attacks on The Satanic Verses, while suggesting that Rushdie was “looking for trouble”? Who could explain John Berger denouncing Rushdie in the Guardian? Or Germaine Greer describing him as a “megalomaniac”? Or for Yasmin Alibhai-Brown in the Independent, seeking the fatwa’s positives for Britain’s Muslim community on its fifth birthday and claiming: “Had it not been for that fateful 14 February 1989, the world would be hurrying, unchallenged, towards the inalienable right to wear blue jeans and eat McDonald’s hamburgers.” Or the postcolonial theorist Paul Gilroy accusing him of “misjudging the people”? These were supposed to be his people.

Then there was John le Carré. The great author could hardly bring himself to condemn the USSR, but he was happy to give countless drubbings to Rushdie — by this point lying low in the Welsh Marches somewhere, under constant threat of death, as his publishers filled their offices with sniffer dogs and bomb-detection machinery. “Again and again, it has been within his power to save the faces of his publishers,” wrote le Carré, “and with dignity, withdraw his book until a calmer time has come. It seems to me he has nothing to prove but his own insensitivity.” Rushdie, he thought, was “impertinent” to believe that those who wrote literature had special claims to free speech.

Unlike the Right, which preferred to giggle in the darkness, le Carré had located the actual terrain where the battle over The Satanic Verses was being contested. This was about writerly freedoms. To tell stories. Nothing was padlocked. Any material could be nicked; to be mocked, worshipped, shredded, then picked up again, whenever you wanted to. The writer had the special privilege, those on Rushdie’s side argued, to be a dogmatician or a doubter. The point was that nobody told them which one to be. “Man was a storytelling animal,” Rushdie writes in Joseph Anton. “The story was his birthright, and nobody could take it away.”

Well, actually they could. Before Friday, the fires around Rushdie appeared subdued. The year was 2022. He believed he was safe. His prophecies about the decline of free speech were indulged but ignored. He had become a designer handbag novelist, whose fiction critics could safely attack again. He was in the uneasy position of being an anti-fundamentalist who said there were fundamental intellectual values to uphold.

Once he was stabbed 15 times, a season of fine words began. There was Yasmin Alibhai-Brown on Twitter, hoping to see Rushdie pull through. There was Iranian Press Television’s own Jeremy Corbyn, offering solidarity. A contest was held: who would be the last politician to wish Rushdie well? (It was nearly Keir Starmer.) Fearing his death, and perhaps fearing that anyone with an internet connection could look up their behaviour during the initial rages of the fatwa, the Anglosphere jangled with weighty tributes to Rushdie.

The myth of lone-wolf terrorism

But the finest words of all, demonstrating how morbid it all was, came from a man dead for 10 years. In the first rounds of the fatwa, Christopher Hitchens had tirelessly stumped for Rushdie. Now, in this latest, unexpected round, Hitchens was summoned from his grave. All weekend, videos of him defending Rushdie were shared, videos where Hitchens spoke with an unimaginable frankness, videos where he spoke with more force, more intelligence, and more authority than anybody alive today.

In Joseph Anton, Rushdie writes that even his own defences of free speech had started to sound “stale in his own ears”. Something curdled in the 2010s. While he has escaped with his life long enough to become truly, especially bored of the fatwa, he begins to realise that the cause he is fighting for, the principle he embodies, is in decay. “Something new was happening here: the growth of a new intolerance. It was spreading across the surface of the earth, but nobody wanted to know.” What was happening? A simple, popular idea: if the collective felt upset, it had the right to silence the individual. This is what countless controversies, from Charlie Hebdo to The Lady of Heaven, scratching away in the background, proved. Authors like Peter Carey, who defended Rushdie in the Nineties, would not defend Charlie Hebdo in 2015, not weeks after the cartoonists had been slaughtered in their offices.

The world had turned. The idea had been internalised. It had spread far and wide, beyond religion, beyond anything Khomeini could have imagined, freakishly stretching and reaching into every cultural nook. The principle had a language: “It isn’t worth the fuss; it’s not a good look; it won’t play well.” Easier to say, as the Associate Editor of the Independent did a few years ago, that Rushdie’s “silly, childish” book “should be banned under today’s anti-hate legislation”. Who wants a brick through the window, a death threat, a calumny, all that damage to your reputation? Write out of turn and you get what you deserve. People felt this was justice, not cowardice. This is what Gilroy, le Carré, and Berger were getting at. They realised first that poets were not “the unacknowledged legislators of the world”. Poets were fair game, like everyone else. They realised, in fact, that most people do not like freedom of speech very much. Most people — and that includes most writers — will not risk being banished to Siberia.

“Good men would give in to fear and call it respect,” Rushdie predicted in Joseph Anton. “Good men would commit intellectual suicide and call it peace.” He was right. Martin Amis had worried about Salman Rushdie. What wasn’t so clear that morning in 1989 was how much further than Rushdie the culture of his fatwa would extend.