“Death is a master from Germany.” The line is from Paul Celan’s Deathfugue, a poem which tried to express the abject horror of the Nazis’ genocidal war in Eastern Europe. Celan, a Jew, was a son of Chernivtsi, then a Romanian city, now in Ukraine.

Those unforgettable words, written in 1945, remained buried in the German psyche. A bottomless sense of guilt for the crimes of the Third Reich meant that for decades many Germans (mostly in the western half) harboured a deep suspicion about their own culture and country, a fear that a militarist, nationalist, murderous Germany could rise from the ashes of the war.

Hence, for decades, Germany pushed pacifism and disarmament coupled with trade and dialogue, a policy that took off with social democratic chancellor Willy Brandt’s Ostpolitik in the late Sixties and Seventies, as West Germany began to import natural gas from the Soviet Union. When, in 1999, Vladimir Putin, a former KGB agent who had lived in Dresden and was a fluent German speaker, replaced Boris Yeltsin in the Kremlin, Germany doubled down on Wandel durch Handel (change through trade). Volkswagen opened a large factory in Kaluga south of Moscow in 2007.

In 2011 — under the watch of ex-chancellor Angela Merkel — the Nord Stream 1 Baltic pipeline began to inject Siberian gas directly into the veins of German industry — circumventing transit countries like Ukraine, robbing them of revenue. Until the day of the invasion, Germany somehow imagined the controversial Nord Stream 2 would still open.

In December 2021, Putin phoned Merkel to thank her for “many years of fruitful cooperation”. In hindsight, what he meant was: thank you for filling my war chest. A day earlier, the Russian president had written to the incoming social democratic chancellor, Olaf Scholz: “I count on engaging with you in constructive dialogue and working together on current issues on the bilateral and international agenda.”

In mid-February, as the Russian troop build-up suggested that Putin was really planning the unthinkable, Scholz took his turn at the end of that six-metre table in the Kremlin to talk diplomatic solutions — and flew back to Berlin, hopeful.

Then, on February 24 the sky fell in. Putin’s invasion of a large sovereign country two borders away (as the crow flies Kyiv is 748 miles from Berlin) shattered every illusion. The entire West was duped, but no country was more duped than Germany.

Germany was lost for words. The vocabulary required to describe what had happened lay beneath the ruins of the country’s beliefs about itself, Russia and the world. As Armin Nassehi, a sociologist at the University of Munich, wrote on February 25: “We seem to be completely blank to Russia’s aggression, not only militarily but also intellectually and conceptually.” 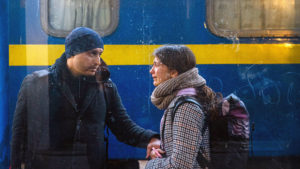 The Germans had failed to fathom that, nearly 80 years after the Second World War, the existential threat to Europe would come from elsewhere. As the scale of Putin’s plans for Ukraine sunk in, Germany’s political consciousness began to shift. It was now clear that the support of Europe’s economic powerhouse for Ukraine (5,000 helmets!) had been shamefully inadequate. On Sunday February 27, Olaf Scholz — who up to that point had been viewed as a bland, ineffective chancellor — stood before the Bundestag and announced the most profound about-face in German foreign and security policy since World World II.

“In view of the turning point Putin’s aggression represents”, he said, “our standard is: What is needed to secure peace in Europe will get done”. A €100 billion defense fund for this year alone, twice the size of the annual military budget. Massive modernisation of the arsenal, structural reform of the decrepit, poorly organised armed forces. Germany would, for the first time since WWII, send weapons into a crisis zone. From now on the budget would surpass 2% of GDP — just as a blustering Donald Trump had demanded. A few sentences transformed Germany into the world’s third largest military power in terms of expenditure, surpassing Britain and France.

MPs cheered. Some cried. Scholz had turned Germany’s understanding of itself on its head. The widespread delusion that a country of 80 million smack in the middle of the continent could remain an over-sized Switzerland died for good.

Naturally, left-wing SPD backbenchers and their Green counterparts made their outrage heard but the leadership of the two left-of-centre parties stands behind the Scholz proclamation, as does the yellow partner in the “traffic light” coalition, the pro-business FDP. Unsurprisingly, the centre-right CDU is on board.

“In less than 96 hours”, wrote Die Zeit, “the political coordinates have shifted. The SPD has thrown 30 years of foreign and security policy overboard, the Greens have finally said goodbye to pacifism, the FDP has said goodbye to austerity at all costs and to the idea that the energy transition should not cost the state anything — and the CDU has said goodbye to the certainty that 16 years of Merkel were 16 good years”. Angela Merkel was no saint

This government’s central project, climate neutrality, has been derailed. The idea that Russian gas could serve as a stop-gap measure until enough renewable energy sources came online was one more shattered illusion. The Green economy minister Robert Habeck must now cobble together a path to carbon neutrality that slashes dependency on Putin’s fossil fuels. To keep the lights on, Habeck, of all people, is mulling an extension of coal and nuclear plants. Security trumps climate.

Another observable effect is a fraying of the political edges. The Right-wing populist AfD is fractured and weakened. Their previous admiration for the Russian president isn’t a good look, neither is ranting about “globalist” institutions such as the EU and Nato. Their whining about “corona dictatorship” comes off as puerile when an actual dictator starts a war.

Meanwhile, members of the small Left-wing party Die Linke, with its roots in East German communism, have also struggled to condemn Putin and suppress their anti-Nato instincts. Some still insist that the alliance’s eastern expansion is to blame for the war, but they’re getting lonelier by the day. This line of thought resonates with ever fewer Germans. As one commentator wrote: if Poland weren’t in Nato, the Russians wouldn’t stop until they reached Słubice on the German border.

A minority of Twitter leftists warn of a new German militarism and the dangers of “shifting baselines” — the implication being that a better-funded, more effective Bundeswehr could result in aggression originating from Germany itself. In the minds of such people, Germany will always have an authoritarian, bellicose core, despite all the evidence to the contrary.

A dictator has spat in Germany’s face and is threatening the stability of its neighbourhood. “We have an enemy again, who turns the gaze on ourselves”, writes Nassehi, meaning Germany has finally woken to the obvious fact that it is a mature, responsible democracy firmly anchored in Europe. That neighbouring countries such as Poland celebrated Scholz’s sea change boost is significant.

A friend close to the SPD leadership explained that Scholz’s defense initiative will be deeply embedded within European structures and in coordination with Germany’s allies. It’s light years from the old German militarism.

Has Germany banished its ghosts once and for all? Was this the final milestone on its path to normality? There are grounds for scepticism. The VW plant has closed but Russian gas still flows through Nord Stream 1. One could argue that Scholz didn’t really change his mind, but was strong-armed by allies. Some point out that throwing money at the neglected Germany military won’t solve its structural problems. A writer in Berliner Zeitung says Germany’s “toxic pacifism” will rage on beneath the surface.

Ten days into the war, Germany is a changed country, no question. What another ten days could do, is anyone’s guess.