Thousands of the world’s global elite are convening in Davos this morning for their most important annual get-together: the meeting of the World Economic Forum (WEF). Alongside heads of state from all over the world, the CEOs of Amazon, BlackRock, JPMorgan Chase, Pfizer and Moderna will gather, as will the President of the European Commission, the IMF’s Managing Director, the secretary general of Nato, the chiefs of the FBI and MI6, the publisher of The New York Times, and, of course, the event’s infamous host — founder and chairman of the WEF, Klaus Schwab. As many as 5,000 soldiers may be deployed for their protection.

Given the almost cartoonishly elitist nature of this jamboree, it seems only natural that the organisation has become the subject of all sorts of conspiracy theories regarding its supposed malicious intent and secret agendas connected to the notion of the “Great Reset”. In truth, there is nothing conspiratorial about the WEF, to the extent that conspiracies imply secrecy. On the contrary, the WEF — unlike, say, the Bilderberg — is very open about its agenda: you can even follow the live-streamed sessions online.

Founded in 1971 by Schwab himself, the WEF is “committed to improving the state of the world through public-private cooperation”, also known as multistakeholder governance. The idea is that global decision-making should not be left to governments and nation-states — as in the post-war multilateralist framework enshrined in the United Nations — but should involve a whole range of non-government stakeholders: civil society bodies, academic experts, media personalities and, most important, multinational corporations. In its own words, the WEF’s project is “to redefine the international system as constituting a wider, multifaceted system of global cooperation in which intergovernmental legal frameworks and institutions are embedded as a core, but not the sole and sometimes not the most crucial, component”.

While this may sound fairly benign, it neatly encapsulates the basic philosophy of globalism: insulating policy from democracy by transferring the decision-making process from the national and international level, where citizens theoretically are able to exercise some degree of influence over policy, to the supranational level, by placing a self-selected group of unelected, unaccountable “stakeholders” — mainly corporations — in charge of global decisions concerning everything from energy and food production to the media and public health. The underlying undemocratic philosophy is the same one underpinning the philanthrocapitalist approach of people such Bill Gates, himself a long-time partner of the WEF: that non-governmental social and business organisations are best suited to solve the world’s problems than governments and multilateral institutions.

Even though the WEF has increasingly focused its agenda on fashionable topics such as environmental protection and social entrepreneurship, there is little doubt as to which interests Schwab’s brainchild is actually promoting and empowering: the WEF is itself mostly funded by around 1,000 member companies — typically global enterprises with multi-billion dollar turnovers, which include some of the world’s biggest corporations in oil (Saudi Aramco, Shell, Chevron, BP), food (Unilever, The Coca-Cola Company, Nestlé), technology (Facebook, Google, Amazon, Microsoft, Apple) and pharmaceuticals (AstraZeneca, Pfizer, Moderna). The composition of the WEF’s board is also very revealing, including Laurence D. Fink, CEO of Blackrock, David M. Rubenstein, co-chairman of the Carlyle Group, and Mark Schneider, CEO of Nestlé. There’s no need to resort to conspiracy theories to posit that the WEF’s agenda is much more likely to be tailored to suit the interests of its funders and board members — the world’s ultra-wealthy and corporate elites — rather than to “improving the state of the world”, as the organisation claims.

Perhaps the most symbolic example of the WEF’s globalist push is the controversial strategic partnership agreement the organisation signed with the UN in 2019, which many view as having drawn the UN into the WEF’s logic of public-private cooperation. According to an open letter signed by more than 400 civil society organisations and 40 international networks, the agreement represents a “disturbing corporate capture of the UN, which moved the world dangerously towards a privatised global governance”. The provisions of the strategic partnership, they note, “effectively provide that corporate leaders will become ‘whisper advisors’ to the heads of UN system departments, using their private access to advocate market-based profit-making ‘solutions’ to global problems while undermining real solutions embedded in public interest and transparent democratic procedures”.

This corporate takeover of the global agenda, aided and abetted by the WEF, became particularly apparent during the Covid-19 pandemic. Global health policy and “epidemic preparedness” have long been a focus of the WEF. In 2017, the Coalition for Epidemic Preparedness Innovations (CEPI) — an initiative aimed at securing vaccine supplies for global emergencies and pandemics, funded by government and private donors, including Gates — was launched in Davos. Then, in October 2019, just two months before the official start of the outbreak in Wuhan, the WEF co-sponsored an exercise called Event 201, which simulated “an outbreak of a novel zoonotic coronavirus transmitted from bats to pigs to people that eventually becomes efficiently transmissible from person to person, leading to a severe pandemic”. In the event of a pandemic, the organisers noted, national governments, international organisations and the private sector should provide ample resources for the manufacturing and distribution of large quantities of vaccines through “robust forms of public-private cooperation”. 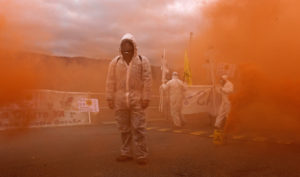 Why the West should go nuclear

So, it is safe to say that when the Covid pandemic broke out, the WEF was well-positioned to take a central role in the pandemic response. It was at the 2020 gathering in Davos, on January 21-24 — a few weeks after the novel coronavirus had been identified in China — that CEPI met with the CEO of Moderna, Stéphane Bancel, to establish plans for a Covid-19 vaccine, in collaboration with the National Institutes of Health (NIH) in the US. Later in the year, CEPI was instrumental in setting up Covid-19 Vaccines Global Access (Covax), in partnership with the WHO, and in providing funding for several Covid vaccines.

These public-private and corporate-centred coalitions — all with ties to the WEF, and beyond the reach of democratic accountability — played a crucial role in promoting a vaccine-centric and profit-driven response to the pandemic, and then in overseeing the vaccine rollout. In other words, the pandemic brought into stark relief the consequences of the WEF’s decades-long globalist push. Again, it would be wrong to view this as a conspiracy, since the WEF has always been very candid about its objectives: this is simply the inevitable result of a “multistakeholderist” approach in which private and “philanthropic” interests are given greater voice in global affairs than most governments.

What is troubling, however, is that the WEF is now promoting the same top-down corporate-driven approach in a wide range of other domains, from energy to food to global surveillance policies — with equally dramatic consequences. There is a reason governments often seem so willing to go along with these policies, even in the face of widespread societal opposition: which is that the WEF’s strategy, over the years, hasn’t just been to shift power away from governments — but also to infiltrate the latter.

The WEF has largely achieved this through a programme known as the Young Global Leaders (YGL) initiative, aimed at training future global leaders. Launched in 1992 (when it was called Global Leaders for Tomorrow), the initiative has spawned many globalist-aligned heads of states, cabinet ministers and business leaders. Tony Blair, for instance, was a participant in the first event, while Gordon Brown attended in 1993. In fact, its early intake was packed with other future leaders, including Angela Merkel, Victor Orbán, Nicholas Sarkozy, Guy Verhofstadt and José Maria Aznar.

Why we’ll end up eating bugs

In 2017, Schwab admitted to having used the Young Global Leaders to “penetrate the cabinets” of several governments, adding that as of 2017, “more than half” of Canadian Prime Minister Justin Trudeau’s cabinet had been members of the programme. More recently, following Dutch Prime Minister Mark Rutte’s proposal to drastically cut nitrogen emissions in line with WEF-inspired “green” policies, sparking large protests in the country, critics drew attention to the fact that, in addition to Rutte himself having close ties to the WEF, his Minister of Social Affairs and Employment was elected WEF Young Global Leader in 2008, while his Deputy Prime Minister and Finance Minister Sigrid Kaag is a contributor to the WEF’s agenda. In December 2021, the Dutch government published its past correspondence with representatives of the World Economic Forum, showing extensive interaction between the WEF and the Dutch government.

Elsewhere, the former Sri Lankan Prime Minister Ranil Wickremesinghe — who last year was forced to resign following a popular uprising against his decision to ban fertilisers and pesticides in favour of organic, “climate-friendly” alternatives — was also a devoted member and Agenda Contributor of the WEF. In 2018, he published an article on the organisation’s website titled: “This is How I Will Make My Country Rich by 2025”. (Following the protests, the WEF swiftly removed the article from its website.) Once again, it seems clear that the WEF’s role in forming and selecting members of the world’s political elites is not a conspiracy, but rather a very public policy — and one which Schwab is happy to boast about.

Ultimately, there is no denying that the WEF wields immense power, which has cemented the rule of the transnational capitalist class to a degree never before seen in history. But it is important to recognise that its power is simply a manifestation of the power of the “superclass” it represents — a tiny group amounting, according to researchers, to no more than 6,000 or 7,000 people, or 0.0001% of the world’s population, and yet more powerful than any social class the world has ever known. Samuel Huntington, who is credited with inventing the term “Davos man”, argued that members of this global elite “have little need for national loyalty, view national boundaries as obstacles that thankfully are vanishing, and see national governments as residues from the past whose only useful function is to facilitate the elite’s global operations”. It was only a matter of time before these aspiring cosmocrats developed a tool through which to fully exercise their dominion over the lower classes — and the WEF proved to be the perfect vehicle to do so.