Boris Johnson was not universally admired in the Foreign Office, when he headed it. In late 2017, his allies there suggested he would benefit from having a chief of staff. “This suggestion seemed to fall on deaf ears”, writes Michael Ashcroft in his latest political biography. Then, in early 2018, Johnson became keener on the plan, saying he had just the right candidate in mind. But his allies were “aghast”; Johnson’s choice was quite unsuitable, lacking the heft for the role. “Everyone advised him not to do it. They told him she had been over-promoted and that making her his chief of staff was ridiculous”, says a source close to the episode.

The candidate was Carrie Symonds. Unknown to his advisers, Johnson had become close to her, and around this time, one friendly MP walked in on the pair in “a compromising situation” in his House of Commons office. Undaunted and unembarrassed, Johnson persisted with the idea of making Carrie head of staff, calling in Zac Goldsmith to offer support. Only after a (named) aide threatened to resign did Johnson drop it.

If ever a book invited lazy thinking from journalists, then First Lady: Intrigue at the Court of Carrie and Boris Johnson is it. We know what 76-year-old Ashcroft thinks about a lot of things, so it is easy to assume that the billionaire won’t be a fan of Carrie, who is very much a modern, liberal, green Tory (though they share an interest in animal welfare). The book on David Cameron that appeared under his and Isabel Oakeshott’s name, though very readable, was a piece of score-settling by a man who felt his beneficence to the Party had gone under-appreciated.

He remains something of an outsider so, one might think, this new title is presumably another piece of axe-grinding. Plus, given that many of the juicy bits have already appeared in the newspaper serialisation, why bother with the book itself? And evidently some will object to the imbalance of an idiosyncratic rich man examining the life of a woman half his age. One reviewer became “absolutely furious” at Ashcroft referring to Carrie, then 31, as a “young lady” in the introduction; for her, the narrative never recovered.

There are parts that made me squeamish, and certainly some of the anecdotes from her early years feel slightly invasive, inevitably in a biography of this type. But to disqualify Ashcroft because of an imputed attitude to women is short-sighted. And to say his book is a misogynistic hit job just isn’t good enough. The fake feminism of Carrie Johnson

The days when he would use his wealth to elevate him above libel laws and ventilate nonsense about David Cameron putting his penis in a dead pig’s mouth, or his wife having an affair with one of her security people, seem to be behind him. (Francis Elliott and I checked the latter rumour when co-writing the first biography of Cameron and established it was untrue, but it was still doing the rounds seven years later and Ashcroft and Oakeshott reported it as gossip.)

And the result of Ashcroft’s, shall we say, maturing as a political biographer should not be ignored.1 Can anyone seriously claim that the story of a Foreign Secretary trying to sign up his new girlfriend for a job for which she is not qualified is not in the public interest? Or that the story is made up? There are too many sources for the book to be dismissed as a hatchet job. True, many remain unnamed, but that should deter no one. It would be naïve to expect otherwise with so fevered a government still in power. So unless Ashcroft has invented them, which is pretty much inconceivable, there is plenty in this volume that deserves to be taken seriously.

The picture that emerges is of someone with more strong opinions than her husband, but no less unhappiness in early life or, later, determination to achieve her goals. Her commitment to green issues, admirable to my mind, is a constant thread. Ashcroft applauds her bravery in waiving anonymity in the case of sex criminal John Worboys, who drugged her in the back of a taxi, her campaign against his release from prison and her willingness to discuss her 2021 miscarriage. He cites her charm, what fun she can be and ability to get on with influential journalists, which is indispensable in PR.

Her early life, financially comfortable rather than lavish, makes for sad reading. She is distant from her father, a journalist called Matthew Symonds, who had another family. The product of an extra-marital affair, she attended two top private schools in London and was brought up as an only child by her mother, Josephine McAfee. She studied drama at Warwick University, spent time in PR and then, after meeting Zac Goldsmith’s cousin at a party, began working for Zac and subsequently for the Conservative Party. She became a special adviser to John Whittingdale and then Sajid Javid before, at 29, becoming the Tories’ communications director. But in Westminster she is not universally liked. We know something of this from Dominic Cummings, never one for deft understatement, but the evidence compiled here goes well beyond any campaign he could have organised. Her shortcomings as a colleague are rehearsed at some length (one colleague on the campaign trail called her “utterly, utterly useless”), as is her lack of interest in policy and her enthusiasm for holidays and smart restaurants. She once described the job of being Tatler’s political editor as her dream job.

There are numerous stories of Carrie being hard to work with and of her desire to get on (no more a crime in a woman than a man, of course). She even has her very own expenses scandal, in which she used the names of junior colleagues when claiming taxis. One source said: “She’s lucky she didn’t end up in more serious trouble… It was misuse of CCHQ funds. She used the names of those just starting out on their careers. That was unforgivable”. Whether the cabs were for her private use, or to meet one of the two married Tory MPs (one was Johnson, the other for some reason remains unnamed) with whom she had a relationship, we may never know.

Normally personality traits in a Prime Minister’s spouse would matter only to the PM, but according to Ashcroft this one seeks to involve herself in areas where she is under-qualified and insert her allies into positions of influence. She appears to have been largely responsible for Allegra Stratton’s ill-fated hiring, for instance. Carrie is also portrayed as remarkably thin-skinned where media criticism is concerned, especially for someone so familiar with the transience of the news trade; the PM apparently spends inordinate amounts of time smoothing her ruffled feathers.

Carrie’s defenders will point to the sacking of John Whittingdale and Henry Newman, two of her supporters, as evidence of her lack of influence. But that seems to have been the result of one of the PM’s knee-jerk responses to criticism, following Lord Frost’s public suggestion that he refresh things by removing the woke crowd. Clearly, there is a body of opinion that disdains the greenery-by-stealth approach that she embodies (and which a braver PM would embrace). Either way, Carrie is scarcely the “private individual who plays no role in Government” that her spokesperson claims.

And there is plenty of evidence that Johnson, who hates confrontation, went to extraordinary lengths to avoid rousing his wife’s temper. He would beg aides to help him keep her happy, at one point asking if someone could be given a job title without actually doing the job, just so it looked as if that person performed that role. Was this another Boris joke? Conceivably, but that can’t excuse everything. 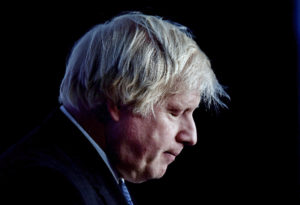 Those who know Johnson well know him to be an organisational disaster. (I’m told his diplomatic protection team often have to remind him to do up his flies.) The expert in mitigating his chaos used to be his former wife Marina. Carrie, perhaps because she is of a more recent generation than Marina, apparently sees no reason why she should mother her husband. As one of Ashcroft’s sources says: “When the marriage [with Marina] ended, he lost his domestic support, the steadying influence, and he traded that in for a demanding girlfriend and strong disapproval from his children”. Even Prime Ministers are entitled to private lives, but are we really to believe these details have no effect on how the country is run?

Without the research that went into First Lady, we would be guessing — trying to join the dots between Cummings blogs, drip-drip news of Covid parties, flat refurbishments and Johnson’s pinball machine decision-making. What the book lacks, though, is the case for the defence. There are few voices supporting her, beyond that of her former boss John Whittingdale. Carrie refused to cooperate with the book, sticking to the “not a public person” line, when even her much-admired Tatler calls her “the most powerful woman in Britain”. Perhaps if she had engaged, or encouraged friends to engage, she could have neutralised the accusations and conveyed a more favourable impression of herself.

Nevertheless, this book offers an account of where Carrie came from, what she wants, what makes her tick and, most important, the influence she has on our PM.