Contemporary explanations of wokeness are always insufficient. Public intellectuals either pretend there has been no major revolution in values, or offer silly debates about whether wokeness is really neo-Hegelian anarchism, or neo-Freudian Romanticism, or double-backflip Puritanism with a dash of neo-neo Kantianism. The work of an obscure Italian philosopher who died in 1989 is perhaps an unlikely place to find clarity. But Augusto Del Noce provides an explanation at once straightforward and original: Marxism changed the trajectory of the West.

Del Noce’s work seems particularly current in the Anglosphere, perhaps, because it has only recently become available in English. Carlo Lancelotti, a New York-based math professor, first translated Del Noce’s The Crisis of Modernity in 2014; this month, his translation of The Problem with Atheism was published. The latter was written first — between 1917 and 1945 — and produced the thesis about Marxism that allowed Del Noce to see the future.

Del Noce’s take on Marxism was strange. It was, he believed, a stillborn ideology, dead upon arrival, yet its rotting carcass sprouted every 20th Century political movement. “There is already at the onset of Marxism an insuperable contradiction,” he wrote. Marx’s view of history, according to Del Noce, was a consequence of his commitment to atheism, which can never be proved directly, and must therefore present itself as the outcome of an irreversible historical process — man’s liberation, via science and technology, from primitive superstition. Marx argued that the idea of God was a symptom of man’s alienation through oppression; as society removed forms of oppression, the question of God would disappear. Society’s values, Marx believed, were just expressions of its economic arrangements and that the development of these arrangements was leading to an inevitable destination: the march of history would culminate in Communism, which would be free of both oppression and the idea of God.

Since, in the Marxist framework, removing oppression is the primary way of bringing about the future, philosophy is subordinated to politics. As Marx wrote, “Philosophers have hitherto only interpreted the world in various ways; the point is to change it.” In Marxism, reason is not something universally accessible to all; it is the tool that certain radically free people use to impose their will on existence. This creates a contradiction: how can anyone change the world if history is inevitably going to culminate in communism? And if all philosophy is just a reflection of economic arrangements, is the same not true of Marxism? What conservatives can learn from Karl Marx

This contradiction bifurcated Marxism along two different paths. The first path embraced the revolutionary philosopher, while the other one embraced history. The first path led to Lenin, the revolution, and the Soviet Union. The second path led to us. Del Noce wrote, “Marxism has ended up being a stage in the development of the technological and affluent society, which accepts all [of Marxism’s] negations of traditional thought but at the same time eliminates its messianic and (in its own way) religious aspect.” Marx’s vision was achieved by his ostensible enemy.

Long before it became obvious, Del Noce wrote that “the alliance between the technocratic right and the cultural left is there for everyone to see.” He argued that liberalism “sublimated,” or absorbed, various aspects of Marxism, transforming into what he called “the technological society.” Bourgeois society always had two historical enemies: revolutionary thought and religious thought. As a synthesis of these opposites, Marxism provided bourgeois society with the tool needed to defeat both. Our society largely embraces Marx’s historical vision: advancing technologies are viewed as de facto proof that the question of God, and all transcendent values, are irrelevant. Yet this vision of history is also turned onto Marxism itself. Communism was tried and it was a failed experiment. The technological society does not have to enlist any religious or moral claims to reject Communism. It simply dismisses Communism as inefficient.

The Leninist path of Marxism also stumbles through our society in a misshapen form. Del Noce argued that Leninism unleashed a type of post-Christian gnosticism — which was an early Christian heresy that believed the world was evil and could only be saved by those with access to secret or esoteric knowledge. Lenin believed that the revolution wouldn’t just happen spontaneously — it had to be brought about by raising the consciousness of the proletariat. This required “professional revolutionaries”. Drawn from the people tasked with the job of modernising the Russian economy, these revolutionaries were an elect class that understands how the world “really” works. The British writer H.G. Wells understood the implications of this better than Lenin himself: in his 1928 book The Open Conspiracy, inspired by his trips to the Soviet Union, Wells called for the West to embrace rule by its own elect class of “experts.” 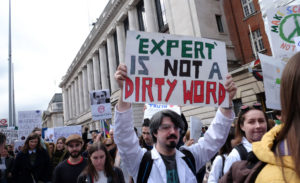 Why we stopped trusting ‘experts’

Everyone understands that a person is not wise by virtue of being an accountant, or a therapist, or an immunologist; we all understand that a person can have limited domain expertise, and be a complete fool outside of that area. Moreover, domain expertise is not the same as executive function: the act of governing a society is the act of choosing between competing goods, and this requires virtues like wisdom and prudence. And yet society has become enthralled by the “expert,” the idea of which works in the exact opposite way, suggesting that a person is equipped to make prudential choices between competing goods simply by virtue of possessing technical knowledge in some limited domain. Eventually this denigrates into absurdities, like the “disinformation expert” who is basically a “truth expert.”

Del Noce paints a landscape of a society that rejects all traditional values in the name of a supposedly neutral rationality, has a caste of revolutionary-cum-technocratic experts who function like gnostic priests, and engages in near-constant, system-approved “revolution.” This revolution was separate from Marxism, and was encapsulated in a sentence written by Friedrich Engels: “the thesis that reality is rational leads, according to Hegelian dialectics, to this other one: everything that exists deserves to die.” Del Noce wrote that “the revolutionary is the executioner of a death sentence that history has pronounced.” But since the radically bourgeois society rejects all transcendent values, its revolutionaries offer only negation. “The global rebellion becomes an absurd revolt against what exists” or what once existed. It becomes either a silly attempt to escape reality or a tool of the system it is revolting against. It should be obvious how this explains the woke, but it also shows how the anti-woke offer a mirror image. 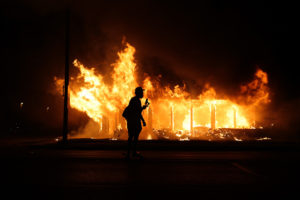 There are many, like James Lindsay and John McWhorter, who champion “Enlightenment values” in the face of the woke. They praise things like reason, rationality, and positivism in the face of a new religious fervor. The miracle of rationality fought off the forces of religious superstition, we are told, and we must be vigilant not to slide back into the shadows of irrationality. Del Noce might call this “the Enlightenment after Marxism.” It is a mythic narrative that its proponents fail to see as myth.

Carl Schmitt once wrote that American financiers and Russian Bolsheviks were engaged in a common struggle. That synthesis is now complete. Del Noce helps us see how this synthesis is at the root of today’s most pressing issues, and how those who want to fight the woke cannot retreat into the static categories of the 20th century. Decomposed Marxism limits our ability to see a new horizon, and the future seems impossibly hopeless because so few are willing to reassess past mistakes.