While Bill Clinton was campaigning to be President in 1992, the singer Gennifer Flowers gave several interviews in which she named him as her long-term lover. Clinton denied it, of course. It was one of the many lies that he told about his relationships with women. But what happened next revealed something of the ruthless character of the man. Fighting to keep ahead in the polls, and wanting to present himself as tough on crime, Clinton travelled down from New Hampshire to his home state of Arkansas to personally supervise the execution of Ricky Ray Rector.

Rector was a black prison inmate who had shot a man in a restaurant over a $3 cover charge and then murdered the policeman who came to negotiate his surrender. Rector then tried to commit suicide by shooting himself in the head. He survived but was effectively lobotomised. When he was executed, he had no idea why he was tied to a gurney with a lethal needle in his arm — no idea as to his crimes, still less that this was an electoral stunt. It took 20 minutes for them to find a vein to administer the fatal injection. The Prison Chaplain, no bleeding-heart liberal, resigned in disgust. Clinton didn’t need to be there but he knew was good politics. The Democrats had to show they were to be trusted on law and order. And Clinton needed a distraction from the Flowers story.

Clinton was campaigning as a reassuringly Right-of-centre Democrat with an easy southern charm. He was the “explainer-in-chief”. People say he could light up the room with his charisma. And he had the appearance of being disarmingly honest.

Then, 25 years ago, the Monica Lewinsky scandal broke. And we learned that Clinton could look straight into the camera and tell flat-out lies. “But I wanna say one thing to the American people. I want you to listen to me. I’m going to say this again. I did not have sexual relations with that woman, Ms. Lewinsky.” When Nixon lied, at least he had the decency to look shifty and sweaty. For Clinton, it was easy, almost as if the truth-telling part of his brain were disconnected from his emotions.

The facts were stark: he was a powerful man who had exploited the affections of a young woman 27 years his junior. Bill was no longer a Democratic Party asset. But it’s the lying, more than the sex scandals, that will be his lasting political legacy. Perhaps no one in such high office has been as good at it, before or since. Prince Harry is a Freudian dream

He managed to combine a certain sort of flirtatiousness with emotional vulnerability. His own complex psychological backstory gave him a dangerous insight into the human condition that enabled him to connect. He comes across as your friend: he holds eye contact to create intimacy; he directs his body language towards you.

Clinton’s dark genius was to make these emotional connections with people and then exploit them. Trump lied all the time, but we came to expect that. Trump was emotionally illiterate. No one really believed him. Bill, however, was so persuasive that the public realised they could no longer tell the difference between truth and lies. And that bred a kind of political cynicism that has come to characterise our engagement with the public sphere. This week is the 25th anniversary of the post-truth era, Clinton being its patron saint.

But it’s not just that Clinton made it so much more difficult to distinguish appearance from reality. One other consequence of his lying was that, absent some sense of agreed truth as a common reference point between political opponents, disagreement twisted into mere power struggle, an expression of force. A new kind of bitterness entered the political blood stream. The Left and the Right came not just to differ but to hate each other. 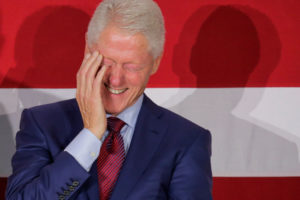 On August 17, 1998, Bill Clinton became the first sitting President to testify before a grand jury investigation. Later that evening, he went on television and admitted that he had had an inappropriate relationship with Lewinsky. Although he said his answers about Lewinsky had been “legally accurate”, he threw himself at the mercy of the American people. He did the whole emotional, confessional thing. He said that he had been the object of a political witch hunt, that this was a matter between him and the two people he loved the most, his wife and daughter. He even brought God into it.

Three days later, Clinton ordered a massive cruise missile attack on targets in Afghanistan and Africa, including a pharmaceutical company in Sudan that made medicines to treat malaria and diabetes, but which US intelligence had mistakenly linked with Osama bin Laden. One might call this the Ricky Ray Rector defence. A Los Angeles Times poll taken a few days later showed 84% of respondents believed that this attack would, in turn, lead to a response by terrorists on US soil.

People keep on defending Bill Clinton because they have been overly charmed by him. And too often they assume that doing bad things politically is somehow the preserve only of Right-wing political extremists. Yet here is a man who is both a centrist and a complete wrong’un.

The late Christopher Hitchens was mistaken about many things, but he was right in his contempt for this man and those who supported him: liberals “lost their souls” defending Clinton. They knew he was a liar who had serially exploited women like Lewinsky, but they held their nose and voted for him anyway. That stain on Lewinsky’s blue Gap dress became a stain on the whole of American politics.