Ever since Stonewall, formerly known as a gay rights organisation, decided to focus on trans rights at the expense of all others, anyone articulating a reasonable objection to this change of direction has been subject to abuse, threats, and even loss of livelihood. The charity’s activists have effectively forced big corporations, public bodies and independent employers to write policies on diversity and inclusion which put trans ideology above all else.

But the barrister and lesbian Allison Bailey may have put a stop to this. Yesterday’s ruling in her case Bailey v Stonewall and Garden Court Chambers found that she had been victimised and discriminated against by her employer for expressing gender critical beliefs. Such was the oppressiveness of Garden Court’s actions against her, she was awarded aggravated damages: £22,000. These are only granted where a discriminator’s actions are particularly unnecessary, high-handed or oppressive.

Bailey also sued Stonewall for inducing, instructing or causing some of GCC’s actions — she had accused the charity of “trans-extremism” — but she didn’t win that aspect of the case. As a result, Stonewall and its supporters, including Owen Jones and Pink News, are celebrating. In their blinkered view, she has lost. However, this is to disregard the consequences of interrogating the extreme ideology and methods perpetuated by Stonewall. Bailey’s tribunal has tracked the ideological trajectory of what was once the foremost activist for gay rights, and put the absurdity of its activism under the spotlight.

Back in 2018, Bailey complained to her chambers when they signed up to Stonewall’s Diversity Champions Programme (DCP), which gives training and guidance on how to be “inclusive employers”. At the height of its power, more than 950 organisations were signed up to what Bailey and many others have called the “protection racket“. But she, along with many other lesbians and gay men, objected to the charity’s stance on trans issues, which included its uncritical promotion of self-ID. Such was Bailey’s disenchantment, she helped set up the LGB alliance which advocated for the rights of lesbians, gay men and bisexuals. This, in turn, was labelled a “hate group” by trans activists.

There can be no doubt that Stonewall, in its aggressive and uncompromising support for extreme transgender ideology and a refusal to discuss or debate alternative viewpoints, helped fuelled the fire already raging against Bailey for her gender critical views and support for the LGB Alliance. In 2019, Kirrin Medcalf, Stonewall’s Head of Trans Inclusion, emailed the heads of GCC accusing Bailey of “making and retweeting multiple transphobic statements online”. Examples included “liking and writing posts referring to trans women as men”, and “writing tweets calling for trans people to lose their current legal rights”. The latter was because Bailey was protesting the fact that male-bodied sex offenders were being placed in women’s prisons.

According to Medcalf, “her actions… threatened the positive relationship that Stonewall and GCC have built with the trans community”. He accused Bailey of making trans people feel “unsafe” if they were to even catch a glimpse of her while visiting GCC. Medcalf stated: “For Garden Court Chambers to continue associating with a barrister who is actively campaigning for a reduction in trans rights and equality, while also specifically targeting members of our staff with transphobic views on a public platform, puts us in a difficult position with yourselves: the safety of our staff and community will always be Stonewall’s first priority. I trust that you will do what is right and stand in solidarity with trans people.” 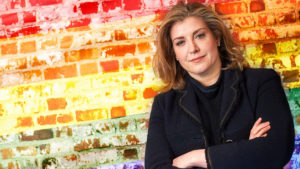 Do the Tories care about women?

According to Bailey, the charity appeared to be threatening to distance itself from GCC if GCC did not make the decision to cut ties with her. During the six-week hearing, at which 30 witnesses in total were cross examined, Bailey claimed that some GCC barristers were invested in trans ideology, and that if the relationship with Stonewall were to become fractious it would be difficult for chambers to take on potentially lucrative trans rights cases.

As a result of Stonewall’s complaints, Bailey was asked by heads of chambers to remove the reference to chambers on her Twitter bio, which she did. However, without her knowledge, GCC then tweeted that the criminal barrister was under investigation by her chambers, which implied she had done something wrong.

An investigation into the complaints about Bailey, including those by Stonewall, was ordered by GCC management and carried out by Maya Sikand QC. Seeking advice from Cathryn McGahey QC, Vice Chair of the Bar Council’s ethics committee, she was informed that two of Bailey’s tweets were “probably over the borderline of acceptable conduct”. One concerned a trans activist named Morgan Page, who had recently been hired by Stonewall. In 2012, Page ran a workshop entitled “Overcoming the Cotton Ceiling: Breaking Down Sexual Barriers for Queer Trans Women”. The “cotton” is a reference to women’s underwear, and a number of lesbians had taken serious offence at the notion that male bodied transwomen had attended workshops in order to overcome difficulties in accessing sex with lesbians.

Bailey, on discovering that Page was working with Stonewall, tweeted that Page is “a male-bodied person who ran workshops with the sole aim of coaching heterosexual men who identify as lesbians on how they can ‘coerce’ young lesbians into having sex with them”. At the tribunal, Stonewall attempted to deny that Page’s actions had anything to do with coercing lesbians into sex; in evidence, though, Bailey was convincing in her arguments that it was precisely that. Stonewall’s Chief Executive, Nancy Kelley, was revealed, in a leaked email to the BBC, to have described those women who resisted cotton-ceiling indoctrination as “sexual racists” because expressing preference in sexual partners was “discriminatory”.

And here it is: Stonewall had gone so far down the rabbit hole, it was defending the idea that lesbians rejecting the penis are bigots. We have long been told that rejecting sex with men makes us bad women, and Stonewall, in defending the cotton ceiling nonsense, appear to agree.

In giving evidence in the tribunal, McGahey defended the concept of overcoming the “cotton ceiling” and compared it with initiatives to promote racial integration in post-apartheid South Africa. McGahey, at the conclusion of the 2019 investigation, decided that Bailey’s use of the word “coerce” was unfounded and directed that Bailey should delete her tweet. Bailey refused.

Complaints about two separate tweets were upheld — the cotton ceiling tweet, and also one in which Bailey wrote, following a report in The Sunday Times about the investigation she was subject to, “I and many other women are grateful to The Times for fairly and accurately reporting on the appalling levels of intimidation, fear and coercion that are driving the Stonewall UK trans self ID agenda.”

Both tweets were castigated even though they were true.

Although GCC claimed that the language used by Bailey went beyond the belief that sex rather than gender is fundamentally important, the tribunal found that all of Bailey’s pleaded beliefs, not just the belief that “woman is sex not gender”, are protected (this protection was established by the Employment Appeal Tribunal in the case brought by Maya Forstater).

The founding myth of Stonewall

That’s why it was found that GCC discriminated against Bailey when it published its statement on Twitter that she was under investigation. It was also found that in upholding Stonewall’s complaint against her, GCC victimised Bailey. Vitally, the tribunal held that Bailey’s protected gender critical beliefs also include the belief that “Gender identity theory as proselytised by Stonewall is severely detrimental to women and to lesbians” and is a protected philosophical belief under the Equality Act 2010.

The fact that a chamber full of experts in human rights law did not adhere to the Equality Law 2010 is staggering; it’s a stark example of how workplaces and other institutions can be influenced by the definition of “transphobia” exhorted by Stonewall.

It has long been known that Stonewall exerts undue influence and instills fear in so many institutions and workplaces when they step out of line on the trans ideology it promotes. This is one reason why it is difficult to take Stonewall seriously when it claims: “The case heard by the Employment Tribunal did not accurately reflect our intentions and our influence on organisations.”

Bailey spent all of her adult life fighting sexism and homophobia and was horrified when she first pushed back against the Stonewall dictats to find that women questioning the new orthodoxy were being labelled Terfs, bigots and fascists. She, too, found herself on the receiving end of death threats; it cost her enormously to stand up and fight. Regardless, Bailey, with Maya Forstater and other courageous truth tellers, has lifted the lid on institutions and individuals who should have known better.

Upon hearing the Tribunal decision Bailey said: “I did not win everything, but I won the most important thing: I have brought Stonewall’s methods into the public eye, and I have shown them for what they now are.”

Stonewall had become as impenetrable and unaccountable as its namesake. But Bailey made sure it was finally held to account and will no longer be able to act with impunity when it comes to peddling its trans ideology and misinterpretation of the law. Organisations that put “Stonewall Law” before Equality Law will now be aware that they could now be acting unlawfully. In removing Stonewall’s right to silence she exposed them for the immoral parasites they have become.