When I started working at Berliner Zeitung two years ago, the staff were putting together a dossier on the East-German experience to commemorate the 30th anniversary of reunification. It seemed like the natural thing to do: the newspaper had been set up by the Soviets after the capitulation of Nazi Germany, and was one of East’s Germany’s few surviving serious publications.

A slew of essays had been commissioned on the trials and tribulations of the former East. Topics ranged from the crystal meth crisis in the city of Chemnitz to the widespread feeling among Easterners of being “second-class” citizens. One of my jobs was to translate this writing for an English audience.

It was fascinating work, but while it helped me better understand the predicament of those “socialised in the East”, as the Germans say, it also triggered in me some typical Besser-Wessi (know-it-all-Westerner) eye-rolling. When will these East Germans stop complaining? When will they admit that reunification has vastly improved their lives? It’s a bit of a generalisation but no matter how many billions are ploughed into their part of the country, they always seem to have something to complain about.

Since September or so, the Besser-Wessi’s counterpart, the Jammer-Ossi (Eastern whiner), has been back in the news. Every Monday, in cities and towns across Saxony, Thuringia, Saxony-Anhalt and Brandenburg, citizens have gathered to protest the government’s energy policy, the cost-of-living crisis and its support for Ukraine. Their demands include an end to the sanctions against Russia, a return to using the Nord Stream 2 gas pipeline, and immediate talks with Russia to end the war.

Placards at these gatherings are straightforward. They read “No poverty for Biden’s war” or “Immediate Nato withdrawal from Ukraine” or, in English, “They got money for war but can’t feed the poor”. What’s striking is how the words “Putin” or “Russia” are nowhere to be seen — as if the war were entirely the doing of imperialist Uncle Sam. As if Ukraine had no right to defend itself. As if Poland, the Baltics and other eastern European nations were just puppets of an American masterplan to control the region — and had no legitimate security concerns of their own. The protesters aren’t your traditional peaceniks. No flowers nor Birkenstocks here. Instead, they represent the far-Left and far-Right fringes, with both the Ring-wing populist Alternative für Deutschland (AfD) and far-Left Die Linke trying to light a fire under a new rebellion on the streets.

Some Right-wing organisers hope growing anger about the war will bring together unlikely bedfellows from Left and Right under the banner of anti-Americanism. Jörg Elsässer, the publisher of far-Right German magazine Compact promoted a demonstration outside the US Consulate in Leipzig last weekend with the hashtag #Amigohome (Yank go home). Meanwhile, veteran Left-wing politician Oskar LaFontaine (a Wessi who became disillusioned by the Social Democrats) published a book titled Ami it’s time to go home: A plea for the self-assertion of Europe. For LaFontaine, Germany supplying weapons to Ukraine makes it a vassal of the United Sates. Compact, not to be outdone, has just put out a special edition titled “USA vs Germany: The 100-year war”. The previous week its cover featured LaFontaine’s wife, the popular Die Linke politician Sahra Wagenknecht, with the headline “The best chancellor for Left and Right”.

Stoking anti-Americanism probably isn’t even necessary. A more effective rallying call is the feeling that the East is suffering disproportionately from the severing of economic ties with Russia. One flashpoint is the city of Schwedt on the Polish border, where the Russian-owned PCK refinery employs 1,200 people. Sanctions on Russian oil kick in on January 1, meaning the pipeline supplying the plant has to shut down, creating a direct link between Western sanctions and potential mass layoffs. Unsurprisingly, economy Minister Robert Habeck was heckled when he visited Schwedt to talk to workers over the summer.

The workers’ concerns are obviously justified, but it’s not as if they aren’t being heard: Olaf Scholz’s coalition of Social Democrats, Greens and Liberals has been working overtime to make sure PCK is supplied with non-Russian oil, delivered via German and Polish ports once Russian oil stops flowing. All jobs at the refinery have been guaranteed to the end of 2023. Yet despite the rescue plans, Habeck and his Green party remain objects of hate in the East. He’s blamed for allowing energy prices to soar to new heights, while the Greens are decried as hypocritical warmongers, former pacifists who have to toe the American line on supplying arms to Ukraine. Elsewhere, anti-war sentiments have come from unexpected quarters: associations representing East German craftspeople have published open letters warning that war-driven inflation meant ordinary people could no longer afford their services. They demand an end to sanctions and a diplomatic solution to the war. Interestingly, trade associations in the West of the country — where SMEs have been equally impacted or even been bankrupted by high energy prices — have said exactly the opposite: Germany must support Ukraine until Russia is defeated.

In fact, it’s hard to pin down an economic cause for the current wave of protests. In Saxony, where the “resistance” is strongest, the jobless rate is at a near-record low of 5%. And despite the gathering clouds, the German economy is still growing. This is reflected in the Government’s new measures. In October, for instance, the minimum wage rose to €12 an hour, up from €9.82 at the beginning of 2022. Next year, jobless benefits rise by €50 per month, alongside higher housing and child benefits. Hundreds of billions are being mobilised to cap energy costs for consumers and small businesses. So claims that nothing’s being done for the little guy seem unfounded.

Rather, what really seems to be driving East-German discontent is a sense of victimhood, helplessness and anger rooted in the traumatic experiences of the Nineties, when Easterners’ fates lay entirely in the hands of Western officials, politicians and businessmen who had descended, in their view, like a pack of vultures, shutting down factories, and stripping assets, sacking teachers, professors, judges and officials with a communist past. It’s as if they woke up in a new country that devalued everything about them: their past, their identity, their work.

The “blossoming landscapes” promised by Helmut Kohl took far too long to materialise — and in many rural areas never really took root. Many no longer trust Western liberal narratives propagated by a uniform media that, in their view, dismisses concerns about immigration as racist or economic anxiety about Covid lockdowns as crazy. Perhaps that’s why conspiracy theories that go well beyond comprehensible dissatisfaction find fertile ground here. A speech by Christian Klar, an extreme Right-winger and convicted felon who organised a demo in the small city of Gera on October 3, spells out a simple, grand explanation for East Germans’ problems: “Whether it’s mass migration, climate change, corona, vaccination or the Ukraine war: everything serves a grand plan. In the wet dreams of the globalists, the cabal, we are all the bottom of the food chain.” 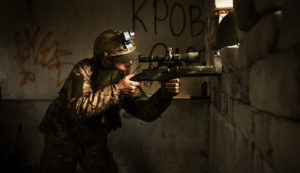 Why Russia retreated from Kherson

But will enough East Germans rebel to the point of no return, delivering extremists into positions of power? I’m sceptical. Enough voters still realise that, despite the problems, there is no alternative to an economy wedded to Western Europe and the US, or to a foreign policy in lockstep with the West. Russia might have delivered cheap fuel for Germany’s industrial economy but that can be replaced in the long run. The US accounted for €122 billion in German exports last year. Exports to Russia were a fifth of that. And American companies are investing like mad in eastern Germany. Tesla’s plant in Brandenburg, as well as a massive new Intel semiconductor factory being built in Magdeburg, will provide thousands, if not tens of thousands, of well-paid jobs.

So, call me naive, but I believe most East Germans have it better than ever. Just like the old readers of the Berliner Zeitung, the numbers of diehard Ossis are dwindling. For now, these demonstrations have remained small. Most younger people just see themselves as “German” and, for the most part, haven’t inherited the trauma caused by the collapse of East Germany. For them, closer ties to Russia make no sense. At least for the foreseeable future, the West is their only home.