Ranks of men in uniform are bombarded with Molotov cocktails, makeshift mortars, and small arms fire. Commando units prepare to infiltrate a smoke-covered urban fortress. A city burns under the watchful eye of the press, reporting on “a civil war”.

This isn’t the siege of Aleppo, it’s a scene from Romain Gavras’s Athena, set in one of France’s burning banlieues. Amid the smoke grenades, police and Athenians engage in brutal fighting at close quarters, with metal rods and batons. Later, the police use fire ladders to scale the walls of a tower block. Athenians on wheels circle around a beleaguered police testudo, firing makeshift mortars at point blank range. Men on both sides are visibly shell-shocked.

Athena, a fictitious banlieue, has taken up arms following the death of 13-year-old Idir, apparently at the hands of local police officers. A viral video seemed to confirm it. But rather than being just another anti-cop movie protesting police brutality, Athena never makes it clear whether the police did actually kill Idir. The audience is denied a clear, anti-racist, political message. We are left to choose our own villains.

While the police lay siege to Athena, Idir’s three brothers select very different paths. Karim, the youngest, becomes Athena’s general and messiah, railing against police brutality, masterminding the looting of a nearby police precinct, and manning the defences of Athena. Mokthar, the eldest, is just trying to save his drug empire amid the chaos. The middle brother, Abdel, is a decorated veteran who fought with the French army in Mali, and wants justice for Idir but without bloodshed. The movie is driven by this central tension: between the vengeful idealist, the violent cynic and the honour-bound poster child for French assimilation.

Athena is a dramatisation, shot in Évry-Courcouronnes, just south of Paris — but it could be a documentary set in any of France’s toughest neighbourhoods. Over the past few years, the police have been expelled from these areas (only to come back in massive numbers, for short periods of time, and preferably never at night). Évry-Courcouronnes itself has been rocked by a series of gang-related murders and unspeakably violent clashes. Across France, newspapers overflow with stories of ambulances, firetrucks and police cars being bombarded with fridges, pétanque balls or Molotov cocktails in similar neighbourhoods. The authorities are powerless, just as they are in Athena. As one Athenian boasts while looting the police precinct: “we are the police”. Annie Ernaux: queen of the suburbs

The banlieues are ruled by drug cartels, which thrive where economic opportunity is lacking. They generate an estimated €4.2 billion annually in France (the publishing industry, for comparison, generates €3.75 billion) and employs a total of around 21,000 full-time workers. Over the last four decades, successive French governments have poured tens of billions of euros into extraordinary plans banlieues and other “Marshall Plans” to renovate these neighbourhoods and attract businesses, but these territories remain deeply segregated and unattractive. Drug-dealing remains one of the few steady jobs.

Take Kassim from a Marseilles banlieue, interviewed for the BFMTV documentary “Marseilles, the drug war”: he describes his stable, well-paying job as a chouf (who keeps an eye for the police or rival gangs, from the Arabic “to watch”). He is adamant that he is not a gangster, and is proud of the long hours he puts in: “I work just like everyone.”

The cartels are not the only separatist force in these neighbourhoods. The rise of radical political Islam has further alienated parts of the banlieues from the French state. According to the scholar of Jihadism Hugo Micheron, more than 2,000 individuals in France are considered to constitute a direct Jihadist threat, while another 20,000 are closely monitored by French intelligence. But there’s a much larger group of up to 750,000 who sympathise with radical Islamist ideas, according to the pollster Jérôme Fourquet. The Islamist movement is far from united, but it nevertheless educated a significant portion of the next generation to defy the infidel (French society) — a rejection tracked by polls over the last decade. In Athena, as in reality, the rebels’ attachment to France fluctuates. After looting the police precinct, a young Athenian in a stolen van proudly waves the tricolore, hinting that the young insurgents seek to do more than avenge the slain Idir. It’s tempting to see the insurrectionists as heroes fighting for a fairer French Republic. But later in the movie, some rebels with a taste for war reinforce the “us and them” narrative. Karim calls his war-hero brother Abdel a “whore in uniform for France”. For having fought for the French army in Mali, Abdel is accused of being an Uncle Tom, a traitor to his “real” community — which sees itself as outside the nation. Are the banlieues even part of France?

French culture seems obsessed with this question. There is currently a proliferation of movies depicting civil wars in banlieues. One of France’s top-grossing movies in 2021, Bac Nord — based on a true story — depicts a confrontation between police and local gangs in the rough north of Marseilles. And Athena itself grew out of 2019’s Les Misérables, which staged a similar banlieue uprising, from the cops’ point of view. It was directed by Ladj Ly, one of the main screenwriters on Athena, and although the confrontation between the police and the locals does not escalate into an all-out war, Gavras has explained: “The idea with Athena was to start with the next riot” — following the events of Les Misérables — “the spark of a confrontation that has not yet happened and that could unfortunately lead to the beginning of a civil war.” All revolutionaries are selfish

The French are haunted by their history of civil war. The last one was only 60 years ago: its embers are still warm — something Gavras alludes to by including the occasional Algerian flag in Athena. Some on the French Right, notably Eric Zemmour, have long capitalised on this anxiety, by predicting a new civil war between the “true” French and the Islamised youth. More recently, such fears have spread beyond the far-Right. The country has been seriously rocked by a series of brutal attacks by Islamist terrorists. Last year, polls showed that while only 45% believe that France will soon have a civil war, 86% believe that in some cities and neighbourhoods, the laws of the Republic no longer apply, and 73% that French society is disintegrating.

A year ago, two open letters, written by dozens of retired general and then-anonymous serving soldiers, warned of the looming civil war. They called for the government to reinstate the authority of the state in these neighbourhoods — or, as they called them, these “lost territories of the Republic”. While most officers remain strictly apolitical, the letter got sizeable public support, with 58% of the French backing its authors.

Even centrist politicians wield this kind of rhetoric these days. “Separatism” or “Islamist separatism” are terms commonly used to express concern about these territories. Macron’s former minister of the Interior, Gérard Collomb, delivered a resignation speech in which he worried that while the French were currently living “side by side”, they might soon be “face to face”, given that in many banlieues, “the law of the drug dealers and of the radical Islamists replaced that of the Republic”. Former President François Hollande admitted that he believed there is a “problem with Islam”, and that France is on the path towards “partition” because of the nation’s inability to integrate a “never-ending” flow of migrants. 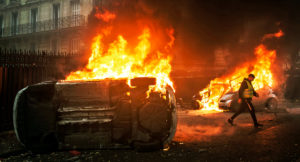 The narcissistic fall of France

Macron himself, once more of a centre-Left multiculturalist comparable to a young Tony Blair, has steered significantly to the Right on matters of identity and immigration. In a controversial attempt to win support from voters to his Right, he gave an interview in the staunchly Right-wing magazine Valeurs Actuelles, in which he suggested a need “deport those who don’t belong here”. Following the assassination of Samuel Paty, the Macronist-dominated Parliament passed a bill which, among other provisions, considerably enhanced the state’s capacity to oversee the organisation and financing of religious associations. It was soon dubbed the “separatism law”.

While some fear civil conflict, others desire it and prepare for it. In Athena, the threat of far-Right groups is ever-present, waiting to capitalise on the chaos. The French state claims that such groups ran a false flag operation to frame the police for Idir’s death. In real life, these cells seem currently too disorganised, or embryonic, or under too much surveillance, to pose a real threat in the short-term. But there’s a distinct possibility that under-the-radar groups or individuals will decide to blindly assassinate those they consider a threat. In 2019, an 83-year-old man tried to burn a mosque in Bayonne, only to get caught red-handed by local parishioners. He shot them on the spot. Gavras did not have to invent much to depict a French society caught between the anvil of Jihadis and the hammer of the far-Right.

It’s hard to imagine any immediate improvement. In fact, things are likely to get much worse, as inflation and the cost of living crisis put even more pressure on France’s poorest neighbourhoods. Politicians on the Right and far-Right will exploit the crisis and imitate the recent successes of Giorgia Meloni and the Swedish Democrats. But policy ideas are few and far between. For a country that spends so much producing stunning civil war narratives, there’s a distinct lack of potential solutions in play. Those being offered range from the laughably insufficient — limiting immigration flows by opposing international trade deals — to the horrifyingly drastic — creating a ministry for “re-migration”.  Athena will not be the last movie of its kind: under a flailing government, the French will continue to fear, and fantasise about, civil war.