“We’ve had to scale the event back,” the bald man told me.

It was less than half an hour before Gina Miller was due to launch her new political party, True & Fair, in a Westminster conference centre. Other than the bald man, there was one person in the room — me. There is scaling back, and there are bloody massacres. Dutifully, I began eating one of the 50 croissants laid out for journalists. Someone had to.

He was a PR, and said that it was his job to handle the press. Handle: like a dog, or a problem. It promised to be a light day’s work. Man, it was quiet. I heard an empty crisp packet breeze across the road to Parliament Square.

Fifty mugs stayed eerily unfilled with coffee. Oh God I thought, if I’m the only person here I’ll have to ask Gina Miller a question. Only one made sense: Gina, where is everybody? The deserted room, big enough for several Greek weddings, gave me that bad party feeling. How could I escape?

The PR sensed my uncertainty, and attempted to handle it.

“It’s not just an in-person event,” he said. “We also have a livestream.” Phew. He shuffled off, and Quentin Letts shuffled in. Now there were two.

Gina Miller must hate Boris Johnson. This week, like every week, he is the only story in the postcode. When Miller was jihading against Brexit, Boris gave us all the pleasure of his final ascent to the top, recently he’s given us the even greater pleasure of his descent. The scenery crumbles, the set collapses, and a cloud of dust blocks the view of anything else. 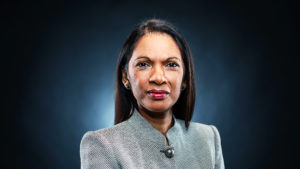 Many people think Gina Miller is an egotist. The millionaire lawyer who tried to stop Brexit; the Remainer activist who couldn’t get outside herself. Well, perhaps. There was always something daring and disobedient and adventurously rude about her. In another life she might have been the first contestant on Dragon’s Den to be arrested for punching Peter Jones in his smug face.

Miller has the gift of not being a nice person. She has the rare courage to be unpleasant. To wreck things. Look at photos of her, triumphant, outside the Supreme Court in 2019. The small, witty mouth and bright, despising eyes. Her chin raised, proud as Benito Mussolini’s. Yes, an egotist. But a worthy player in the drama too. What exactly did she want, now that it was all over?

Quentin and I fought our way through the crowds to the auditorium. There, a few more hacks, heavily outnumbered by Miller’s aides, were finding seats.

Another, hairier, PR toddled up to me. We shook hands. Before I had time to ask him anything, he said: “Oh, no, we’re not worried about the in-person turn out. There’s also a livestream. This is all about introducing Gina — no, sorry — not introducing Gina, but, err…” And then he walked off, handling completed.

But Miller was introduced anyway. First by a video montage of ordinary people reading scripts about how crap British politics is. Then by a PowerPoint — clicked through in a silence so fantastically profound it felt physical — full of slides from the pollsters Savanta ComRes. These revealed the extraordinary: British people do not trust the established political parties, nor do they like them. Politicians, like robbers, need an opportunity. True & Fair’s was the evidence provided by the montage and the slides. Everyone despises Westminster business as usual.

She arrived. White heels, white suit; as pristine as fresh A4 paper. As blank as a lost memory. Miller looked angry; whether at the state of British politics, or at the sad sight of this unfilled room was hard to say. She scowled. Her arched, fixed eyebrows glowed with a special incandescence. I hoped this would show up on the livestream.

Her speech was a blizzard of pointless adjectives, catastrophic predictions, and mangled metaphors. She talked about roadmaps that set out visions. She talked about “deafening silences” and creating a “government that works for everyone”. Miller wanted to “help real people in the real world”. Overworked words like these have a tainted character. They are hard to trust.

Miller chewed on them. Her tone drifted up nasally. Words were stuck in her sinuses. She tried a joke. “Status quo — Latin, some would say, for the mess we’re in.” It was a lawyer’s ventured joke. The product of a padlocked imagination. What Brexiteers get wrong about empire

Moaning about Britain’s low productivity, Miller said we lagged behind the US, France, and Germany. “In fact,” she grimaced, “we only just beat Italy in productivity terms.” Italy! This was British xenophobia so classically proportioned she might have been Roy Chubby Brown. Italy!

The tiny group of hacks began to look at their phones. Online someone had described True & Fair’s colourful circular logo as a “buffering rainbow sphincter of doom”. The internet learned what the rest of us knew: attendance was poor. It was awkward.

Miller crashed on about the empty rhetoric of politicians, while contributing nothing more than that herself. There were no ideas, not a single policy. She would later say that they were available on True & Fair’s website. The more she tried to flesh her party out, the thinner it seemed.

Finally, she mentioned it. “Brexit — yes, I’m daring to use the word apparently banned in Whitehall — is on course to cause a 5% contraction of Britain’s economy over the long term.” After all Miller’s boilerplate, hearing the word was sweeter than the sound of mandolins: something she cared about at last.

Forgetfulness is an essential part of survival. In one sarcastic aside, Miller revealed that she couldn’t let it go. Normal people do. They age, they forgive each other. Brexit is gone. In the long-run, technical arrangements will be made between groups of civil servants, who, although on opposite negotiating tables, believe the same things. The economic impact of the pandemic will make it impossible to tell if Brexit was “good” or “bad”. Lord Frost will publish his autobiography. FPBE Dads will continue to simp Marina Hyde on Twitter. Nothing will change that much — unless you’re Irish, and therefore invisible to the rest of Britain. Miller can’t forget. The deep, banging conflicts of Brexit still jangle in her mind. So she’s launched a doomed political party, for herself. If she had wanted a loser’s revenge, she would have been better off starting a Substack, like Dom.

Instead she was here, lobbing vague slogans — “real solutions rather than empty rhetoric” — to a centre ground that ceased to exist years ago.  “It’s time to demand change,” she said, caught in the delusion that the British voter crosses their ballot hopefully. The British voter usually turns out to release complex, resigned forms of disgust, not to change the country. If it were any different, new parties might be more successful.

So, she is a tragic figure. A Brexit leftover, surrounded by uneaten croissants. In the Long 2016 period she offered Britain a narrative, a high concept. The woman who never finished law school turning over May and Boris in the Supreme Court. She abseiled into the hearts of Remainers like an SAS soldier into an endangered embassy. Or, she was the elitist, doggedly thwarting the will of the people with her fancy lawyers. These were false stories imposed on the random and ambiguous truths of the era.

Still, back then Miller took her opportunities for performance well, and the press found a use for her. Yesterday, outside of Brexit’s high dramas, facing rows of unfilled chairs, she floundered. Miller sounded exactly like what she was railing against — a Status Quo politician. She tried to present herself as a prophet of change, but she looked like a familiar symptom of the times she wanted to transform. Out of touch and toothless, mouthing the same old platitudes about education and the economy you’ve heard a hundred times before. Shouldn’t she just be a Liberal Democrat?

The press were done with her now. Three journalists bothered to ask questions, before Gina Miller stormed off into a side room. Her speech was an end, not a beginning.