This is something special, obviously. Consider, for a moment, the author’s credentials. Pelé knows a lot about playing football, as does Floyd Mayweather about boxing, but do they have the chops to transfer their instinctive and acquired expertise into the realm of language? Unlikely. Here, though, is someone who knows more about modern song-writing than anyone, whose linguistic skills were so far in excess of those displayed by anyone else in his line of work that a Nobel Prize seemed adequate — if appropriately inappropriate — recognition.

“He did it in Las Vegas / And he can do it here,” Bob Dylan sang on “Went to See the Gypsy”; Chronicles Volume 1 proved that, having done it on record, he could do it on the page too. Dylan writing about songs is roughly the equivalent of Shakespeare writing about drama, or Tolstoy on the novel, or… That’s about it really. (Beethoven could only write about music in music.) So you’d be well-advised to attend closely to what he has to say in these 60-odd little essays about songs that have caught his ear. And not only that; courtesy of a Spotify playlist you can have them in your ears while reading about them. Plus, with Dylan circumnavigating the globe with his Rough and Rowdy Ways tour, the book is a hefty and highly appealing bit of merch. Cleverly designed with the Christmas gift market in mind, this cleverly illustrated object is distinctly ownable.

None of which distracts from — possibly even draws attention to — the foundational problem with the project, a problem inextricably linked with the guarantee afforded by the author’s matchless qualifications, namely the songs. The discrepancy between the quality of Dylan’s own songs and the ones he’s chosen to write about is nothing short of chasmal. I’d estimate that a hundred Dylan songs are better than all but a handful celebrated here. We’d rather be reading Dylan trying to fathom the origins and inner workings of his own songs, so The Philosophy of Modern Song is actually a stand-in for what we really wanted for Christmas: Chronicles Volume 2.

Having said that, Greil Marcus was among the first to explain how the immense edifice of Dylan’s work was built on what had gone before — something we have become more conscious of as Dylan entered his late phase, dating from 1992’s Good As I Been To You onwards. He’s massively indebted to the stuff he writes about here, songs he heard as a teenager on the radio or jukebox. He couldn’t have become who he is — and we, in turn, couldn’t have become who we are — without it, without Elvis and all the rest (much of it junk). So yes, it’s of interest even when it’s about stuff — songs — of no interest.

Initially, I thought the reading would lag behind the playlist, that two or three pages might take longer to read than a three-minute song would take to hear, but as I skipped track after track the book took the lead. Then it all got jumbled as I found myself reading about songs that were three selections behind or four ahead of what I was hearing until, eventually, the book was being read without any supporting audio evidence, that is to say it was being read as a book. At this point another kind of syncing issue emerged, a disjuncture between words and readerly attentiveness to them. I started skipping not just the songs but the pages about them, so the whole experience of this immersive tandem became a tug-of-war between the impulse to fast-forward and the need for disciplined resistance to this urge. The impatience was mine — I couldn’t wait to get to “London Calling”! — but it was engendered by the meshed quality of what was on the stereo and on the page. 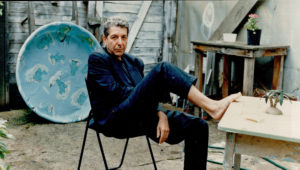 Leonard Cohen was enslaved by Eros

This, needless to say, is not a work of critical scrutiny, and the titular philosophy is manifest only in the Nietzschean sense that any philosophy is a form of transferred autobiography. So when Dylan writes about The Temptations’ “Ball of Confusion”, he’s chuckling in the mirror about “one of the few non-embarrassing songs of social awareness”. Writing songs like this — like “Masters of War”, say, or “Blowin’ in the Wind” — is easy: “First you assemble a laundry list of things people hate. For the most part, people are not going to like war, starvation, death, prejudice and the destruction of the environment. Then there’s the trap of easy rhymes. Revolution/evolution/air pollution.” Ha ha. Johnny Cash was right when, in the liner notes to Nashville Skyline, he wrote that Dylan could “rhyme the tick of time”. He’s a great rhymer who, at any time, can also be a terrible rhymer. I’ve never made it through to the end of “Murder Most Foul” because of the crime of the rhymes. And the first time I listened to “Key West” — his best song of the last however many years? — I burst out laughing on hearing: “Twelve years old and they put me in a suit/ Forced me to marry a prostitute.”

There’s refracted autobiography here — I’m talking about the social-awareness songs, rhymes and so on, not marrying prostitutes — and in some ways the book might be seen as a belated textual equivalent of the derided album of cover versions, Self-Portrait from 1970.  But this is an autobiography that contains multitudes. The stories are his, everybody else’s and nobody’s in particular, though they end up sounding like (cover versions of) Denis Johnson’s. Hence the tendency to deploy the second person, a “You” who is simultaneously a given song’s protagonist — the one doing the driving, dancing, drinking or whatever — and the “you” listening to it. But this “you” is identifiably Dylan in the sense that his DNA is imprinted in the syntax, in its waywardness and the ideas hatching within it.

What this means, in practice, is that he’s riffing on things. You — by which I mean everyone — love guitar riffs. At a gig in Rome in the Nineties, Patti Smith introduced her teenage son Jackson, on guitar, who proceeded to chop his way into “Smoke on the Water”, a beginner’s riff that is also an enduringly great one. But riffing on the page can become wearisome because it lacks exactly the propulsive quality that makes the riff of “(I Can’t Get No) Satisfaction” irresistible. There’s a drift or aimlessness to verbal riffing that is absent in a musical one. A riff in music is narrative in primal form. It could be said, I suppose, that Hamlet riffs on various topics but these are integral to the play’s dramatic scheme of actively suspended volition. In conversation with Philip Roth

There are fun bits and scattered off-the-cuff insights in The Philosophy — “The thing about being misunderstood is that it diminishes your enjoyment of life”; “Complex relationships come with a high price” — but Dylan is neither a Hamlet nor a thinker. Don’t let me be misunderstood: his trade does not require him to think things through so that’s not an issue. It does matter, however, that these pages don’t feel written. They feel talked through, like his Theme Time Radio Hour from a dozen or more years back. Or talked over, both in the sense of on top of (as in talking over the music) and warmed-over.

A pleasant quirk of radio is that you can listen to it while doing other things — “lots of other things,” to quote Cash from Nashville Skyline again — which makes it compatible with drift. Now, a tendency to drift helped make Chronicles absorbing. We hoped it might unlock the mystery of Dylan’s working, the process of how he became what he is (to go back to Nietzsche again); and it did, sort of: by straying into further increments of mystery, by adding extra layers of myth, by leaving stuff out. Even if it wasn’t a work of genius it was clearly the work of a genius. With the new book we tune — drift — in and out as we might while listening to the radio and doing chores, some taking us into rooms where the radio is out of earshot. Or on a road trip when the signal comes, fades and disappears, but we never feel like we’re getting anywhere, even by dint of accumulation. With the route through the songs unclear the navigating voice grows slovenly, weary, even, when approaching the outskirts of superlatives, surprisingly bland. “If You Don’t Know Me By Now” by Harold Melvin and the Blue Notes is “beautifully arranged and performed to perfection”, as if it were an item on the menu of a road-side diner you only stopped at because there was nowhere else for hundreds of miles in either direction. Tonally, some patches are weirdly out of kilter, as when Clint Eastwood and Travis Bickle in Dirty Harry or Taxi Driver are said to have “thumbed their noses” at earlier standards of morality. What on earth is that phrase doing here (or anywhere for that matter)? The same question could, in fairness, be asked of lines in even his greatest songs.

Long ago Clive James wrote that one of the defining features of Dylan’s work was the way that wonderful turns of phrase existed in the tightest proximity to woeful ones. The combination of apparent carelessness and incessant revision — both pre and post-release of a given number — is a key part of his restlessness and of our endless fascination with what emerged from it. You’d listen closely, on the stoned edge of your seat, because there was no telling what was going to come next, even when what came next ended up sounding retrospectively inevitable (another aspect of rhyme). I never approached, let alone sustained, that state of tranced and fulfilled expectation while reading — scanning, skipping, scuttling back and forth among — these decorative pages. I wanted to, but the words wouldn’t let me.