Back in the mid Eighties, a woman named Eleanor Bergstein wrote a movie warning young women what would happen to them if their right to abortion was taken away. “It seemed to me that women in the Eighties no longer cared so much about this stuff, so I set the film in the Sixties to show them how recently in America abortion was banned,” she told me when we spoke a few years ago. That film was Dirty Dancing, and when most people think of that movie they think of Baby (Jennifer Grey, obviously) carrying a watermelon and Johnny (Patrick Swayze, double obviously) holding her above his head on the dancefloor.

But smuggled in amid what Bergstein calls “the fun stuff” is the bloody heart of the film: the white working-class character Penny (Cynthia Rhodes), who has to have an illegal abortion. After being taken to a “butcher” with a “dirty knife” and a “folding table” — Bergstein made sure to included graphic language in the film — she nearly dies, screaming in agony. She doesn’t, but Bergstein had to fight hard to keep the Penny plot in the movie when the studio wanted to remove it: “It had to be in the movie because I could see young women were taking the rights for granted and I wanted to show them what life really could be like in the US.”

They may well be about to find out for themselves. I happen to be in the US this week and waking up to news that a leaked draft shows the US Supreme Court has provisionally voted to overturn Roe v Wade, felt strangely similar to another morning six years ago, when I woke up to learn that Donald Trump was now my president. Suddenly, on both mornings, I was in the land of the unimaginable, a development that was, really, all too foreseeable.

It seems probable that the leak, which will likely be investigated by the FBI, was from a young liberal or conservative clerk working in the court, hoping to excite their bases in the midterms. So reacting to it runs the risk of letting the tail wag the dog: it was done to incite, and incited we all are. And yet. Anyone who cares about women’s rights can’t help but react to it, and getting this confirmed insight into how close American women are to losing their autonomy should shock everyone.

Roe v Wade was always fragile, and, especially in recent years, Republicans have forged an identity out of railing against it. It is stunning to remember now that the party once supported abortion rights, including Gerald Ford and, as governor of California, Ronald Reagan. Justice Harry Blackmun, who was appointed by the unquestionably Republican Richard Nixon, wrote the majority opinion for Roe v Wade. Today, the conservative takeover of the Supreme Court was largely done with the aim of overturning of Roe v Wade. Democrats can and should rail against how nutty the Republican Party has become in the past four decades, especially on social issues like abortion. But they can’t pretend the Republicans ever hid who they are. This has all happened in the open sunlight. And yet, despite that, too many took women’s bodily rights too much for granted for too long. I don’t exclude myself here. I consider myself a full-throated and wised-up supporter of abortion, but I look back on, for example, my admiration for Ruth Bader Ginsburg and her stubborn refusal to make way for a younger justice, who would have been appointed by President Obama, and I cringe at my short-sightedness. Yeah, you go, Girlboss! Gimme more of those photos of you working out with your personal trainer! Ginsburg was a remarkable figure, but by working until she died, and thereby allowing Trump to appoint his third justice, she imperilled so many of the rights she fought for, and that is a tragedy.

Focusing more on the pleasing optics of an elderly lady doing press-ups than on the real risks to women’s rights was a decadent position for me to adopt, and America, the richest democracy in the world, has been distracted by too many decadent positions. Six years ago, I thought there could be no clearer proof of this than the 2016 election, when too many self-described lefties proudly disdained voting for Hillary Clinton, insisting there was no difference between her and Trump, even though one grabbed women’s pussies and the other protected them. Women’s rights? Boring, old, annoying. Like Hillary.

Once Trump was elected, I thought this would lead to a resurgence of feminism, and at first it seemed to, with the global Women’s Marches the day after his inauguration. But this nascent wave was soon overtaken by other issues. According to a 2019 survey from a non-partisan group focused on women’s political education, mass shootings, climate change and racial inequality are all of more concern to Gen Z women than abortion access. “A lot of the language I heard was about protecting Roe v Wade. It felt grounded in the Seventies feminist movement. And it felt like, I can’t focus on abortion access if my people are dying,” one 26-year-old female activist told the New York Times in 2020, explaining why she didn’t feel as impassioned about abortion as she did about police brutality. “Women in the Seventies understood very clearly that having control over reproduction is central to women’s ability to determine their own futures, to get the education they want, to have careers. As people got used to having access to abortion — and there’s a false sense that we’ve achieved a measure of equality — that radicalism women had in the early years got lost,” said Joanna Schoen, the author of Abortion after Roe. Abortion rights are seen by young women as a given — which is understandable, since they have been for their entire lives — and also a bit uncool, something associated with their mothers.

What progressives get wrong about abortion

Institutions that could have helped here instead became blithely distracted. In 2021, the president and chief executive of Planned Parenthood, Alexis McGill Johnson, wrote a hand-wringing editorial about the “harmful choices” made by Planned Parenthood’s founder, Margaret Sanger, who died in 1966, including the allegation that she was a eugenicist. Sanger’s beliefs remain a matter of debate — while Sanger did support some eugenicist beliefs, her real goal was enabling women to control their fertility — but I’d like to focus on two paragraphs McGill Johnson wrote, because they really give an insight into American feminism’s focus in recent years:

“What we don’t want to be, as an organization, is a Karen. You know Karen: She escalates small confrontations because of her own racial anxiety. She calls the manager. She calls the police. She stands with other white parents to maintain school segregation. And then there are the organizational Karens. The groups who show up, assert themselves, and tell you where to march. Those who pursue freedom and fairness, but also leverage their privilege in ways that are dehumanizing.

“And sometimes, that’s how Planned Parenthood has acted. By privileging whiteness, we’ve contributed to America harming Black women and other women of color. And when we focus too narrowly on ‘women’s health’, we have excluded trans and non-binary people.”

Look, eugenics are bad — no argument from me there. But when an organisation that is supposed to support women uses a blatantly misogynistic term like “Karen”, I’m not convinced it has found that right side of history yet. And when an organisation like Planned Parenthood — PLANNED FREAKING PARENTHOOD — puts the term “women’s health” in sarcastic single quotation marks, and prefaces it with an apology for focusing “too narrowly” on the aforementioned apparently non-existent issue, you know something has gone wrong in American feminism.

Many will disagree, but I find it hard to separate the disintegration of a woman’s right to bodily autonomy in America from the rise of gender ideology and the focus, as Planned Parenthood would put it, on trans and non-binary people. Everyone in America, howsoever they identify, should have rights, and it’s wonderful that the younger generation feels so energised by so many social justice issues. But none of this should have been at the expense of women’s sex-based rights. 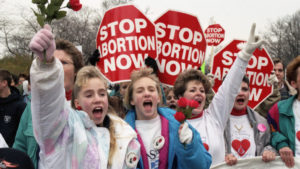 The right to abortion is specifically about who has control over women’s bodies. How, though, can this be discussed, let alone defended, when too many liberal US politicians and liberal media sites can’t even bring themselves to say the word “woman”, even when covering this issue? “Birthing bodies have the right to freedom,” Representative Francesca Hong, a US Democrat, tweeted early on Tuesday morning, apparently unaware that the bodies being fought over here don’t want to give birth — that’s the point of abortion. Hong made sure to put her pronouns in her Twitter bio, but not the word “woman” in her tweet. The ACLU similarly couldn’t say the dreaded W word in its thoughts on the matter, but, then, what to expect of a once great organisation that insists female athletes should compete against male ones, and whose deputy director for transgender justice tweeted that banning a book he didn’t like “is 100% a hill I will die on”.

Republicans, and more specifically the Christian Right, were keen on crushing access to abortion long before pronouns became a grammatical hill to die on. But by tangling itself up in knots over “birthing bodies” and “cis privilege”, the American Left has made it much harder to talk about women’s rights, and therefore much harder to protect them. Abortion is a women’s issue, and one that needs to be talked about specifically with regards to women, because they are the ones who will die here if Roe v Wade is struck down, and, contrary to gender theory’s teachings, you can’t identify out of that.

Maybe focusing on vaginas and misogyny feels super uncool and smelly and Mum-like to some, but this leak should remind everyone how necessary it still is. Decorating one’s social media bio with zeitgeisty memes and emojis is fun, like being spun around on the dancefloor. But it’s time for American feminism to do the heavy lifting again and carry the watermelon.