A week after it launched its attempted blitz across Ukraine, finally the Russian army has taken its first major city: Kherson, a key port city in the south of the country. But the defenders of Kyiv and Kharkiv have held out; elsewhere, Ukrainians have succeeded in repelling the invasion.

Vladimir Putin gambled everything on swiftly dismantling the Ukrainian state — and on that front, he has failed. That the vastly outnumbered Ukrainian air force has yet to be knocked out of the sky is in itself a surreal expression of how terribly Putin underestimated the capacity of the Ukrainian army and population. Simply put: those in Putin’s circle who believe that Ukraine doesn’t exist, that Ukrainians are simply exiled or confused Russians just waiting to be invited back home, have categorically been proved wrong.

Many more innocent people will likely die before this is all over; many more houses will be bombed. Bridges will be demolished by retreating Ukrainian forces. Already, several thousand civilians are reported to have been killed, while millions of others have been forced to flee into neighbouring countries. And yet the country has so far survived a massive assault by a numerically and technologically superior foe. Across Ukraine, the Russian army has failed to achieve any of its strategic or tactical goals.

President Zelenskyy has not yet fled or been executed, and it is now obvious that Russia’s troops will not be able to hold onto Kyiv if they capture it. It remains unclear why the electricity, heating, water and internet have not been knocked out in any part of the country (with the partial exception of Mariupol)  — though the answer must surely lie in the incompetence, logistical failures and lack of preparation that have underscored the Kremlin’s offensive.

While it is possible that the Ukrainian government could still capitulate, this does not seem likely, and would require a drastic escalation of force from the Russian army, up to and including leveling Kyiv to the ground. Whether Moscow can countenance such a level of violence is another question: it is unlikely to support such drastic measures if it wants to integrate Ukraine into a wider project, rather than simply massacre its citizens and plant a flag in the ruins of their capital. 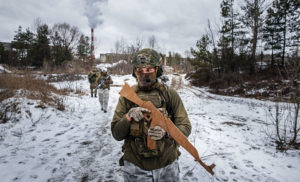 The Kremlin may not have committed enough manpower to conquer a country the size of Ukraine when much of the population is willing to resist so valiantly. However, a week into the war, we do have an idea of what Putin had intended if his troops were successful. According to a recent article in the Russian-state tabloid Komsomolskaya Pravda, he intended to conquer the country and split it into four regions: Crimea, New Russia, Little Russia, and West Ukraine.

While the Russian/Ukraine expert community has spent the past week debating what a post-war settlement might look like, it now seems that the partitioning of the Ukrainian state was always Putin’s intended strategy. After all, the alternative — imposing a Moscow-controlled proxy puppet government — was always going to be impossible. Blowing up Ukrainian cities is not a constructive way to entice Ukrainians to your political cause. Even among the most rabidly pro-Kremlin politicians and media figures in Ukraine, the Russian attack has elicited tremendous disgust and embarrassment.

As for the pro-Russian political proxies within the Ukrainian parliament — who make up roughly 10% of its representatives — most fled the country in the days leading up to the invasion. There are, as a result, quite simply not enough serious pro-Kremlin politicians left in the country to form a puppet government. Meanwhile, those who had fled will now look tarnished if they return to a ruined Ukrainian capital to be established as quislings.

The idea of a symbolic restoration of Yanukovych/Azarov cabinet, which had been quietly floated by the Kremlin, is also a non-starter. Even the most pro-Yanukovych sympathisers in the Donbas now view him as a cowardly weakling, after he fled for Russia at the end of the Maidan revolution. Eight years later, there is simply no appetite for a restoration of his people or regime. In the lead up to the war, when the Americans and the British tried to dissuade Moscow from invading by leaking both real intelligence and what may have been unverified information, the Western allies identified various local proxies as potential leaders of a puppet regime. The UK Foreign Office in particular suggested that Yevheniy Murayev, the leader of an insignificant pro-Russian faction in the Ukrainian parliament, would lead the new government.

Of course, Murayev denied the entire plot and swiftly went underground. But the names of other minor politicians were soon circulated, and then ridiculed — by both local and Western analysts — for being trial balloons, misinformation, or proof that the Kremlin has zero understanding of the nuances of Ukrainian power dynamics. Either the people concocting these plans in the Russian Defence ministry were fools, or this was all a bad joke. Oleg Voloshin, for instance, one of the more marginal names offered, has ranted at me over lunch that gay marriage was merely a cover for demon-worshipping paedophilia. You wouldn’t trust these people to run a local council, let alone the second-largest country in Europe.

Yet not every nominee was a joke. Viktor Medvedchuk, who picked Putin to be godfather to his daughter, was always the most likely candidate. But in what can only be described as an act of total incompetence, the Ukrainians allowed Medvedchuk — the main proxy of Russian power within Ukrainian politics — to escape the country over the weekend. This may very well prove to be a terminal mistake by the Ukrainians, who should have kept him as a hostage to ensure that Zelenskyy would not be assassinated. Medvedchuk is perhaps the only pro-Russian leader within Ukraine with the gravitas to fill the leadership role. It is doubtful, however, that even if he were to return to rule Ukraine, he would succeed as Putin’s puppet. One of the reasons Putin decided to proceed with a fundamentally foolhardy and unlikely plan of invasion was his correct sense that the window of opportunity was closing. Indeed, the absence of an organised group of proxies waiting to form a quisling government is, if anything, an apt demonstration of how far Ukraine has already floated outside of the realm of Russian control.

This is the dilemma Putin faces: even if his army finds a way to repress the so-far irrepressible Ukrainian resistance, what next? A Russian occupation is off the cards. A puppet government will swiftly fall. When the bombing finally stops, Putin will look around at a defiant country — and find that he has already lost.