The withdrawal of Russian forces from Kherson back across the great river Dnieper was not inevitable — it was entirely voluntary. Yes, they were performing poorly under Ukraine’s accurate artillery fire, but they could have been ordered to hold on and suffer casualties. It wouldn’t be the first time Russia had used its troops as fodder.

Instead, the Russians were withdrawn to fight another day — but not in Kherson, nor anywhere else in the south. Instead, they were sent to join other Russian forces withdrawn from the southern front, whose strength is increasing daily with the arrival of reservists who have gone through refresher training.

Initially, it was reported that recall notices were sent to 300,000 former conscripts (though I understand the actual number may have been 492,000). Many fled the country or were already abroad, while others were armed with bullet-proof medical exemptions from hospitals — it was no use bribing a mere doctor. Of those who reported for duty, quite a few were sent home as obviously unfit, but what remained was still a larger number of front-line troops than the number available at the start of the war.

More than eight months have passed since Putin invaded Europe’s largest country with a very small army, trusting in the high-tech wonders of “hybrid”, cyber-dominated, “non-kinetic” warfare that work so well in theory. We now know that both Putin’s FSB and the CIA estimated that Kyiv would fall in 24 hours. and the entire country in a few days.

Since then, Putin has suffered many disappointments, for some of which he can only blame himself. The Tuvan civilian Sergei Shoigu, who became  Russia’s Minister of Defence in 2012 despite having zero military experience, signed off on a wildly optimistic plan — a parade advance up the highway to Kyiv — and then failed to appoint others to extricate the army once the column was stuck. It soon transpired that Russia’s military industries had been hollowed out by the wheelings, dealings and thefts of Putin’s oligarch pals. All the gleaming prototypes proudly displayed to the world in recent years had not actually been manufactured, meaning almost all the tanks, artillery pieces, combat aircraft, missiles and ammunition actually used in combat so far date back to the Soviet era that ended more than 31 years ago. They were, therefore, no better than the leftover Warsaw Pact weapons Ukraine has received from the Czech Republic, Estonia, Poland and Slovakia, and far inferior to the new missiles and artillery sent by the UK and US with dribs and drabs from France, Germany and other NATO allies. Meanwhile, Putin’s own refusal to declare war and mobilise the Russian armed forces has, in turn, forced him to rely on individual “contract soldiers”, ex-servicemen recruited in Russia’s poorest peripheries, many if not most of whom had not served in the combat arms in the first place, and on the Wagner mercenaries, who immediately discovered that fighting patriotic Ukrainians was a far harder thing than to fight Libyans or Syrians.

Plunged into this reeking mess of his own making, Putin only has one way to redeem himself, and Russia’s reputation as a country that ultimately wins its wars. This cannot be another repetitive push up the road against Ukrainians forces now sharpened and tempered by their heroic defence, and even more by their successful offensive drives — first to Kharkiv and beyond, and now to Kherson, with others in between.

Only a successful counter-offensive on a theatre scale could allow Putin to extricate himself. Every Russian remembers Operation Uranus, the furious, all-out, four-day counter-offensive that, 80 years ago this week, cut into both sides of the German 6th Army wedge that had almost reached the Volga at Stalingrad. Emerging from the snow and the darkness of the night, Russian troops on foot, on horseback and riding on tanks quickly defeated the Hungarian, Italian and Romanian troops guarding the long flanks of the German advance, and then repelled German attempts to counter-attack. The Germans were left cut off in Stalingrad, starting the siege that would end in the surrender of the entire 6th Army, and the beginning of the end for Nazi Germany. 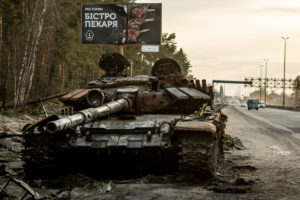 Ukraine is not Nazi Germany and Kyiv is not Stalingrad, but a new Uranus offensive could be crippling. It would descend from Belarus far enough south to cut the road and rail connections from the West to Kyiv, leaving the city and the Ukrainian armed forces not fully besieged, but unable to receive the weapons, munitions, and fighting vehicles they have been receiving from the West. That might be enough to set the stage for the only negotiated end of the war that was ever possible: fully supervised plebiscites — with complete control by neutral powers and the vetting of eligible voters — in the Donetsk and Luhansk regions.

Of course, if the Ukrainians themselves redeploy from the south in good time, successfully intercept the descending Russian column, and then start to break it up with their precise artillery fire, Putin would finally have to concede defeat, and then leave the Kremlin in one way or another. Whether this happens will become clear sooner than we might think. As I write, the very latest reports suggest that many more reservists are being recalled. This is what happens when a Great Power attacks a smaller one and fails: it tries again, and again.