The crowd that gathered last night on the Champ-de-Mars, underneath the Eiffel Tower, to celebrate Emmanuel Macron’s re-election as President were waving flags — not all of them French. Half of the guests held aloft the blue-and-yellow banner of the European Union, and, as Macron arrived, it was the Ode to Joy that blared over the loudspeakers. The French cannot say they weren’t warned.

In the closing weeks of his campaign against nationalist Marine Le Pen, Macron called the vote a referendum on the European Union, and even a choix de civilisation. A vote for him was for modernity, global capitalism and Brussels. His opponent, Marine Le Pen, wanted to take back powers for France. “There is no such thing as European sovereignty,” she said, “because there is no European people.” The 58-42 margin of his win would seem to settle the matter. But things are not that simple in French politics.

The two-round system of French voting renders important political tendencies invisible on the day of the big vote. The eloquent Leftist Jean-Luc Mélenchon, who was narrowly eliminated from contention two weeks ago, gave a rousing speech as the polls closed announcing his candidacy for prime minister in what he calls “the third round”. What he means is that, in June, the country will elect a new national legislature. A coherent opposition to Macron shows signs of forming, even if it is not yet clear whether Le Pen, Mélenchon or someone else will lead it. And Macron’s opposition has learned lessons from this campaign that it can apply to the next one.

Macron is term limited. This is his last presidential election. But he is already a historic figure. He is both the engineer and the product of the collapse of the country’s two-party system. Since 1958, progressive Socialists have squared off against nationalist Gaullists (now called Les Républicains). In 2017, Macron, the Socialist economics minister, defected from his party, taking its elites — most of them Blairite defenders of the global economy — along with him. Gaullist globalists rallied to him, too. Former President Nicolas Sarkozy completed the process two weeks ago by endorsing Macron after the first round. The Socialist rank-and-file scattered to smaller parties, and now seems to have been gathered in by Mélenchon. The Gaullist rank-and-file has drifted to Le Pen. 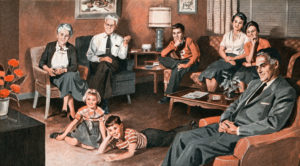 How America became a mad house

Something similar happened in other countries this century, usually to the benefit of the globalisers. In the US, elite Republicans became Democrats. In Germany, in the years before the last election, Social and Christian Democrat elites fused into three different coalition governments, with a more demotic wing of each party falling into the Left and the Alternative for Germany.

Much discussion of the presidential election has involved France’s “archipélisation”, after a concept developed by the political scientist Jérôme Fourquet. Increasingly, the elite and the non-elite political tendencies have no more contact with one another than if they were living on isolated islands. Macron is the candidate of rich cities, beach towns, ski resorts and the “instagrammable” parts of France.

But, 60 kilometres outside of France’s cities, Marine is the most popular politician. She is the candidate, writes Fourquet, of people whose work involves repetitive tasks, bad smells, irregular hours and loud noises. In the very richest neighbourhoods, though, it is as if she doesn’t exist. In the first round in the 6th arrondissement of Paris (the one that contains St-Germain-des-Près and all those cafés Hemingway drank in), she got 4% of the vote and finished sixth. Just 854 people ticked her box.

Macron favours a lot of things that upper-crust politicos like but have lately been too shy to talk about. He is the candidate of free trade. During the debate between the two rounds he boasted that he opposed the South American trade bloc Mercosur — but only because of its record on deforestation in the Amazon. He is the candidate of raising the retirement age from 62 to 65. And he is the candidate of stable investments. An astonishing 43% of Macron’s voters are already retired, according to Fourquet. That may be why they don’t mind Macron’s pension reform, which will only kick in for voters born after 1969. Le Pen dominates the generation of voters born between 1973 and 1987. In the history of French election programming, this year’s debate was the all time, rock-bottom ratings dud. Part of the problem is that in built-out continental welfare states, campaigns turn on accounting matters — is 90€ a month a sufficient supplement for handicapped workers? Should we reform the EU’s “Posted Workers Directive” of 1996? How many minutes should an EHPAD (care home) nurse take to dress a patient in the morning? Really, they spent 2 hours and 45 minutes talking about these things. And even though much of the French public considers Macron arrogant – by turns pedantic, po-faced and mansplanatory — nonetheless, 59% of viewers thought he beat Le Pen soundly.

There is still a taboo against voting for Le Pen among polite French people, and unfortunately for her, most French people are polite. Her father, Jean-Marie Le Pen, started the National Front in the Sixties to thwart France’s liberation (or abandonment, depending on how you look at it) of its Algerian colony. He later ran into trouble with both the public and the law for tasteless ethnic wisecracks. He was called a “fascist” and her (renamed) party is tarred as “extreme Right”.

That’s unfair. Her attempts to “de-diabolise” the party have been unceasing, even extending to expelling her father from it. Her programme would be considered that of a normal populist conservative party elsewhere: reforming immigration law to limit family reunification; various tough-on-crime gimmicks, such as a right to self defence and a lot of new prison construction; and regulation of the Islamic headscarf. One measure was especially sought after by the gilets jaunes movement which nearly brought the Macron government down in a protest against petrol taxes in 2018: English-style rights to gather signatures to petition parliament. Le Pen also wants to restore the wealth tax, formerly paid by the richest 350,000 people in France, which Macron eliminated when he first took office. Macron replaced it with a steep tax on real estate valued at over €1.3 million, which has caused havoc among low-earners with the ill-luck to inherit nice family homes. No one really thought Le Pen was a radical. “Let’s be honest,” editorialised the weekly political magazine Marianne in the issue where it endorsed Macron. “There are a lot of things in her programme that seem to come straight out of the articles Marianne has been running for the past twenty-five years.”

Marine’s project of de-diabolisation seemed to be vindicated this year. Another candidate, the historian and TV polemicist Eric Zemmour, arrived with a project to restore the elder Le Pen’s clash-of-civilisations programme. This winter, after some early successes in the polls, Zemmour’s vote faded back to 7% and Le Pen survived the challenge. She defeated Macron in several mostly black West Indian islands (Martinique, Guadeloupe) that belong to France, and even in a number of Arab neighbourhoods in the south.

“You’d start a civil war in the housing projects,” Macron accused her during the debate,” promising to fight against her “party and its history”. Unfortunately for Le Pen, she remains a useful pretext for her opponents to use in consolidating an elite party such Macron’s La République en Marche. Strangely, Mélenchon might have a better chance to challenge Macron in legislative elections this spring.

It is not very easy to say whom the eloquent septuagenarian represents. Some people talk about Mélenchon as a “resurgence” of the old Left, since he has taken parts of the old Communist suburbs, like La Courneuve — as if those places still had the same electorate that they had when the factories were humming in the Seventies. In fact Mélenchon has been winning because he is the only candidate who talks seriously about “Islamophobia”. He got 70% of the Muslim vote in the first round. He’s less the Bernie Sanders of French politics than its Sadiq Khan. Although Mélenchon has jumped on all sorts of contemporary political bandwagons — from gendered violence to  speciesism — an essential resemblance between his brass-tacks economic programme and Le Pen’s has been noted. Mélenchon urged his followers “not to give a single vote to Mrs Le Pen”. Politicians often fight their rivals more than their enemies.

And right now, rivals are what Le Pen and Mélenchon are: each is vying to be at the head of the same anti-Macron, anti–global capitalism coalition for the June elections, and to become prime minister of France. A question naturally arises about what might have happened if Éric Zemmour’s candidacy had not collapsed. Had he finished a couple of points higher, it would have been at Le Pen’s expense, and Mélenchon, a superior debater, would have advanced to face Macron. He would have had another advantage — the lack of a public taboo against voting for him. It is hard to say where he would have finished. But it would probably have been higher than 42%.

This taboo is the interesting thing destabilising French politics just now. The country has undergone a partial revolution. The winners of globalisation have formed a new political movement — Macron’s — out of the upper echelons of the old bourgeois parties, and it stands dead-centre in the political system. The former lower echelons of those two parties are natural partners against the elite party, but they cling to their 20th-century grudges and have not coalesced. Macron’s party will rule without serious challenge until they do.

For Macron, the way is clear to begin building the Europe he sketched out in his so-called Sorbonne speech, early in his presidency. That speech, timed for the days after the German election of September 2017, was supposed to announce a new partnership between France and Germany to drive European integration forward in matters of common budgeting, common debt and a common defence. The programme was put on hold when Merkel finished far weaker than expected. But common debt instruments arrived with the European Covid bailout plan, and the Ukraine war is provoking interest in common defence.

Macron has just scored what looks like a resounding re-election. But if you dig down, he is beloved of only 40% of his countrymen. The other 60% will not lack for occasions to grumble, as the gilet jaunes did in 2018. It is a moment with the potential to remind us that French politics always looks stable until it goes off the rails.