In the early hours of 26 September 1983, Stanislav Petrov, a 44-year-old Lieutenant Colonel in a Soviet Air Defence command centre outside of Moscow, was covering for a sick colleague when an alarm when off. According to Soviet satellites, five intercontinental ballistic missiles were hurtling from the US towards Russia. Petrov knew he had 25 minutes before the nuclear missiles hit Soviet territory.

Despite the warnings flashing up before him, Petrov decided that the incoming missiles were more likely a bug in the newly installed computer system than an actual US nuclear strike. He ignored the protocol that demanded he immediately report any suspected US nuclear attack up the chain of command, thereby avoiding a Soviet retaliation which could have precipitated a full-blown thermonuclear war.

It turned out that the Soviet satellites had mistaken the reflection of sunlight on clouds for the flare of a rocket launch. Petrov retired from the military the following year, and his role in averting nuclear war only became public in 1998, with the publication of the memoirs of General Yuri Votintsev, commander of the Soviet nuclear forces at the time of the incident. As Petrov’s role became more widely known, he was celebrated, being awarded prizes from various Western civil society groups. To this day, his name circulates annually on social media as one of humanity’s overlooked heroes.

Petrov is not the only Russian with the claim to have saved humanity from nuclear war. Vasily Arkhipov was also a Soviet officer, this time in the navy, who made a critical decision that avoided US retaliation. As the deputy commander of a flotilla of Soviet submarines deployed to Cuba during the Missile Crisis of October 1962, Arkhipov vetoed the decision of his two fellow officers to fire a nuclear-tipped torpedo at the US destroyers that were harassing their submarine in the waters around the island. Their sub was too deep underwater to receive radio commands from Moscow, and the submarine’s captain, Valentin Savitsky, believed that a Third World War had already broken out on the surface, necessitating that they strike back. When the submarine eventually managed to surface and radio contact was restored, Arkhipov was vindicated – war had not erupted, and the ship returned to the USSR. Arthur M. Schlesinger, Jr., a senior adviser to the Kennedy administration at the time, later characterised the dispute as “not only the most dangerous moment of the Cold War, [but] the most dangerous moment in human history”.

With the Russian front currently crumbling under the Ukrainian counter-attack, and the intimations of Russian president Vladimir Putin that he is willing to use nuclear weapons, as well as the renewed fighting between Armenia and Azerbaijan on Russia’s borders, today’s geopolitics bear a striking relation to those of the early Eighties — if not the Cuban Missile Crisis itself. So, given the structure of nuclear arms control agreements has been allowed to decay, eroding the capacity for jointly managing de-escalation between Washington and Moscow, we must ask ourselves an uncomfortable question: are there still Arkhipovs and Petrovs on the Russian side, and would their counsel would once again prevail over that of their superiors and fellow officers? A sceptic could legitimately ask why we only seem to expect Russian officers to save the world from nuclear war. Of all the times the world has skirted close to Armageddon since the start of the Atomic Age, Arkhipov and Petrov nonetheless remain as the only two named people who are not political leaders and are commonly identified as having played a specific individual role in blocking the path to nuclear escalation — and certainly the only two with any historic or public notoriety. Doubtless this notoriety is partly an artefact of the collapse of the USSR, which opened up Soviet archives and made available so many hitherto classified Soviet military and state secrets. Perhaps we don’t know the names of the American counterparts to Arkhipov and Petrov because the US state has never been cracked open in a similar way.

However, there is also a distinctively ideological sheen to the stories of Arkhipov and Petrov — one that indicates there is more to their Cold War feats than merely having declassified Soviet files to hand. For the liberal political imagination, the irresistible allure of these two tales is that in both cases we have ordinary, lone and otherwise unknown individuals who are beholden to a totalitarian state, who had to carefully weigh this duty in their own consciences alongside a colossal existential choice for humanity, while simultaneously acting as mere cogs in a vast and complex bureaucratic-military machine. It is the structure of this fable — of individual ethical choice still shining through the murk of a sinister political machine — that fixes Arkhipov and Petrov in Western public memory, more than any deeper understanding of the geopolitics of cold wars or mutually assured destruction. The reverence for Petrov is akin to the deference shown by Western publics for the late Mikhail Gorbachev, the last leader of the Soviet Union who is often cast as the man who saved the world from nuclear apocalypse by ending the Cold War, once again proving the triumph of individual moral decency over a vast, impersonal and monolithic regime.

Perhaps instead of allowing ourselves to be so easily dazzled by this tale of how individual conscience narrowly saved us from nuclear war, we could also reverse this perspective, and ask whether Soviet Communism may have even played a positive role in the decisions of Arkhipov and Petrov. The fact that the Soviet Union claimed to represent the next stage of human civilisation necessarily placed humanity at the core of how the Soviet state conceived of itself. Doubtless this ideological disposition influenced how both Arkhipov and Petrov were raised, socialised, educated and inducted into the military structures of the regime, and perhaps even factored in their willingness to exercise caution and restraint when confronted with the prospect of unleashing nuclear extermination. 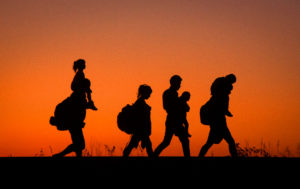 Yet a 44-year-old officer in Russia’s air defence forces today will only have dim childhood memories of Soviet Communism. Their ideological commitments will have been shaped in the post-Soviet era, seeing the near-collapse of the Russian state and its restoration under Putin’s rule. Would an Arkhipov or Petrov educated and trained on the basis of Russian nationalism reach the same decisions as an Arkhipov or Petrov who grew up under Soviet communism? Does an ideological commitment to the Russian nation on the part of Russian nuclear officers today make nuclear war more or less likely than before? And on the side of the US, how much can we put our hope for prudence and restraint in an officer corps and politico-military elite that has been committed to an expansionist vision of liberal globalism for 30 years, with an ideological zeal that would embarrass a Cold War-era Soviet commissar?

Whether liberalism or communism, globalism or nationalism weigh more heavily in the scales of individual decision-making when confronting a nuclear crisis, what we also know about the night of 26 September 1983 was that Petrov had spent weeks de-bugging the computer system, which made him predisposed to suspect its flaws. Moreover, Soviet ground radar failed to corroborate what the satellites were showing, and Petrov knew that a US nuclear strike would be unlikely to be limited to five missiles. Even if he had reported the satellite data up the chain of command as he was required to do, it is perfectly possible that one of his superiors might have reached the same decision. By the same token, during the Cuban Missile Crisis, even if Arkhipov had not prevailed over Savitsky and Maslenikov, and if the B-59’s “Special Weapon” had been launched, it is still possible that the both the Russians and Americans would have realised what had happened, and they could have undertaken de-escalation that would have avoided an all-out nuclear war.

Such counterfactuals point to a more disturbing truth: that perhaps the real reason we are enamoured of the tales of Lt. Col. Petrov and executive officer Arkhipov is that the state machinery worked, the human cogs performed their allotted roles in managing the inevitably deficient technology, and the system of mutually assured destruction worked as intended. Far from heroically subverting the machine of which they were a part, Petrov and Arkhipov’s efforts ensured it functioned well.

The notion that a nuclear balance of terror worked is a harder truth to accept than the comforting tale of heroic individuals defying a malignant and dysfunctional system. Yet as we know, all machines break down. If Petrov and Arkhipov show us how a well-functioning military machine and international system of mutually assured destruction works, what happens when we confront a collapsing military machine and a failed international system? As the Russian military retreats in Ukraine, let us hope that Russian nuclear deterrence today will function in the absence of Soviet ideology, and that the forces of restraint do not rest merely on the forbearance of individual Russian officers.