The Embrace, a new statue unveiled in Boston to honour Martin Luther King, brought exactly this to mind.

The 20-foot bronze is intended to depict the moment King learned he had won the Nobel Peace Prize. It’s inspired by a photograph of him embracing his wife, Coretta Scott King. But it doesn’t depict the pair enjoying a hug. It’s just the arms, joined by immense, amorphous, organic-looking tubes that evoke tentacles, raw sausage, or perhaps a length of colon. Even, as many suggested (including one of Coretta Scott King’s descendants), a giant penis.

Nor was the derision solely from conservative quarters, for all that it was louder there. Even Karen Attiah of the Washington Post fretted at these two important figures in the civil rights movement “reduced to body parts”, denouncing it as a “dismembered” and “de-racialised” symbol of anodyne “love”, shorn of King’s true radicalism. But this is, in fact, precisely the point. The Embrace captures a peculiar dilemma of the emerging post-human political order. How do you wield the power of public art as a way of signalling shared meanings, when your claim to rightful rule is based on the idea that all shared meaning is by definition oppressive?

It has always been the prerogative of ruling elites to determine the nature, placement and aesthetic of public monuments. From ancient Rome to the British Empire, or indeed the Soviet Union and beyond, one may infer a great deal about ruling moral and political priors from what gets a big statue. In 2020, for example, the president of Turkmenistan unveiled a surreal 19ft gilded statue of an Asian shepherd dog, symbolising the country’s heritage. Other monumental works of the last half-century or so may be religious, such as Japan’s 120m Ushiku Daibutsu Buddha statue, completed in 1993. Or, often, they are nationalistic, such as Russia’s 85m The Motherland Calls, completed in 1967, or the 182m statue of Vallabhbhai Patel unveiled in 2018 in Gujarat, as a symbol of Indian unity and independence.

And as one power falls and another rises, so too the older monuments will be at risk: images of Saddam’s giant statue toppling in 2003 are an iconic part of the Iraq war, while (on a smaller scale) the fall of Edward Colston into Bristol Harbour was a similarly iconic moment in the modern statue wars.

And even if fallen statues are preserved, it matters a great deal where. A giant gilded dog on an important thoroughfare in Ashgabat is infinitely more honoured than the likenesses of Stalin that now dot Grūtas Park in Lithuania, informally known as Stalin World. Here, tourists may view a huge collection of toppled Soviet-era monuments, the lack of reverence in their placement underlined by juxtaposition with a children’s playground and mini-zoo.

But what the statue defenders perhaps don’t realise is that we all already live in Grūtas Park: a semi-ironic display of relics from a civilisation and political order that died in the 20th century. For it is not a coincidence that every instance of large, figurative monumental art of the kind described above is located in a non-Western country. In Western Europe, that style was largely abandoned after 1945: too many blamed the high culture of the 19th century, including its Christian faith, for the horrors that killed millions. In response, tastemakers turned away from figurative works – and as for heroic idealisations of the human form, forget it: just a bit too Nazi. 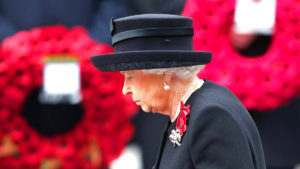 What the poppy really means

Instead, postwar art mavens embraced abstraction, clean lines and planes, exemplified by the “modern, forward-looking and contemporary” Festival of Britain. Sculptors such as Henry Moore and Barbara Hepworth reflect that commitment to a world stripped bare of anything too heroic, figurative, or ideological: one that had shed its dangerous fixation with the past, and pointed only toward a clean, innovative, universalist tomorrow. Public art was best when it didn’t really say anything. Traces of the older order, meanwhile, were for the most part politely ignored, or (increasingly) treated as relics.

But that intermezzo is over. As the End of History has come to an end, public art has once again become a site of explicit moral statement: not spaces filled with abstractions where no one mentions the war, but increasingly the battlefield itself. Gone are the carefully neutral, antiseptic abstracts. Now, public art must have a message.

But what should it say? The old order knew what it drew on: broadly speaking, in the contest over what we memorialise, one side stands for the long, messy history of the West – including the Christian humanist vision of human nature and dignity, and the common good, that Martin Luther King, a preacher, drew upon for his civil rights activism. But as far as the West’s cultural elites are concerned, that order died and was buried by 1945, along with that vision of what humans are, and the idea of nations as such.

And yet what’s replacing it is also, in a sense, dead. The old regime is denounced for being inadequately concerned with the suffering of victims – such as in Afua Hirsch’s call for Nelson’s Column to be pulled down, on the grounds that Nelson “was what you would now call, without hesitation, a white supremacist”. But when the time comes to fill those plinths with positive representations of its own sacred values, a new regime whose only sacred value is individual autonomy finds that representation runs the risk of excluding someone.

So any sculptor tempted to make something beautiful is on shaky ground. As the Nazis knew all too well, an idealised human form implies a hierarchy of values. This is dangerously exclusionary. Thus, inasmuch as heroic figurative works are still permitted, these are almost always what the sociologist Philip Rieff called “deathworks”: anti-monuments whose aim is principally not to uphold but negate sacred values. The prewar figurative register for public art still exists – but only in subjects that invert or negate a trope from the old order: Medusa holding the severed head of Perseus, for example, or a dreadlocked man in a hoodie astride a prancing horse.

In other words: it’s not that we no longer have skilled artists making beautiful, proportionate, figurative work. It’s just that, the class with its hands on the purse-strings doesn’t care. For what this class seeks to represent — the class that dominates media, NGOs, universities and the like — is its own form of power: one which I have elsewhere called swarmism. Swarmism is power without a head, which is to say without accountability. It operates instead via “overlapping partnerships and networks”, as the foundation which funded The Embrace describes itself. And it is power without a heart: in place of fallible, capricious human feeling, including human mercy or relationships, it offers bureaucratic compassion via algorithmic taxonomies of “intersecting” victimhood.

For the swarmist vision of human flourishing has no shared meanings. Instead, all we really have in common is individual freedom, our technologies, and our physical bodies. And if this is true, and if it is also true that all hierarchies of values are exclusionary, there is nothing to aspire to beyond this life. There is nothing admirable about humans. The best we can aspire to is probably to re-engineer ourselves into something superior.

This bleak vision, combined with the most vigorous possible negation of Christian humanism, overlaid with anxious posturing about “marginalised groups”, forms the backbone of the swarmist aesthetic — and nothing could be more swarmist than the unaccountable committees who now commission public art. The Embrace, for example, was commissioned by a nonprofit (one swarm) with support from a foundation (another swarm). It is indeed fitting that Martin Luther King, a man fired by a Christian belief in universal human dignity, should have his legacy reworked for the headless, heartless, swarmist order, by representing his moment of triumph in an embrace without either a head, or a heart.

After close to a century of careful, antiseptic abstraction, then, the swarmist monumental style has arrived. It memorialises its moral taxonomies in deliberately beautiful deathworks, and deliberately ugly, posthuman artworks. In sculptural form, it produces something akin to a deification of nihilism, that alternates between feasting on the carcass of the previous regime and creating swarm-approved monuments to a posthuman future. It is a queasy mix of genuflection to any visual tradition save the Western one, combined with a Cylon-laboratory celebration of distorted, protean flesh.

We get the high culture we deserve. Our journey to this point didn’t begin with the two world wars, but rather completed its trajectory there. Now, after a mid-century intermezzo of abstraction, we appear to have accepted that the Christian age is over, as too is industrial one, and our period of mourning for its demise. And as the WEF’s grandees meet in Davos to discuss how best to embrace the Fourth Industrial Revolution that will transform us into cyborgs, the culture swarm has settled on a style of monumental art to suit. Welcome to the flesh factories.