Is children’s TV programming actually made for ravers? It’s a long time since my last pharmacologically-assisted all-nighter, but I have vivid memories of watching programming aimed at the under-fives at breakfast time, having not yet been to bed.

The bright colours, narrative non-sequiturs and plinky-plonk music typical of preschool TV are perfect for that state of neural short-circuit. And the ultimate choice back in the day was Teletubbies.

Launched on 31 March 1997, Teletubbies celebrates its 25th anniversary this week. I’ve now had the dubious privilege of meeting the show twice: first as a raver in the late Nineties, and more recently as the mother of a toddler. And it was wildly successful from the moment it landed, both with the chemically insomniac as well as its official target audience of preschool children. It’s one of the most lucrative shows in BBC history, with merchandising sales raking in billions, and by 2015 had aired in over 120 countries with translation into more than 45 languages.

But if the show has been a roaring success, it has also spurred a subculture of perverse readings, including that the Sun Baby is a demon and the  occult connection between the show and Harry Potter. Elsewhere, Teletubbyland has been interpreted as a post-apocalyptic scenario set in a bomb shelter.

And this secondary success is also richly deserved. For among many other things, it’s a brutally frank sketch of a hypermodern era that began gathering speed around the time the show launched, and has now consumed us all. And these humanoid-but-infantile Teletubby cyborgs, media devices painlessly grafted into their flesh, are fitting avatars for a uniquely modern conflation of technology and nurturing that’s on its way to collapsing the boundaries between childhood and adult life.

There were plenty of surreal children’s TV shows prior to Teletubbies. Gen Xers will remember Oliver Postgate’s Bagpuss (1974), which blended music by folk luminaries Sandra Kerr and John Faulkner with dreamy, animated storylines. Ten years later, geriatric millennials of roughly my vintage may recall the creepy claymation Trapdoor (1984) in which worms, monsters and a talking skull squirm about and sometimes eat one another in the pit under a castle.

Bagpuss captures the dreamy nostalgia and make-do-and-mend aesthetic of a Seventies era materially on its uppers and in many corners still stubbornly resistant to “modernisation”. Trapdoor is a vivid metaphor for the pitiless eat-anything-smaller-than-you morality of Thatcher’s Big Bang age. Teletubbies, though, brought the winds of change with it: no more nostalgia, and certainly no more competition. Instead, ahead of the millennium, it offered a powerfully 21st-century vision, launched in the febrile final weeks of the election campaign that ended nearly two decades of Tory hegemony. 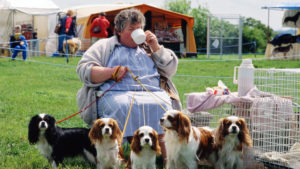 Stop calling yourself a dog parent

The timing was immaculate. For Teletubbyland is a perfect fit for the bright, modern optimism of Blair’s New Labour: a clean, modern, aspirational world of universal abundance, where there is no longer any need for conflict or unhappiness because technology will deliver for all.

It’s pure Third Way. Teletubbyland is tidy, hygienic and futuristic, but not cold or forbidding. Bunnies roam around nibbling the lush grass and flowers, while the Teletubbies themselves live in a structure worthy of Grand Designs (launched two years after Teletubbies): a grass-roofed eco-home built into the hillside, filled with smart gadgets that cater to their every need.

Like good citizens of the End of History, the Teletubbies potter about this bright vision of what Aaron Bastani called “fully automated luxury communism” on short, directionless adventures. Their basic needs are met by automation, including a robot that cleans, another that makes food, and speakerphones that provide structure to their lives by emerging from the ground to announce what the Teletubbies will do next.

When they aren’t pursuing these mini-quests, they interact playfully with one another or consume short videos from human world, broadcast to them via a windmill-like aerial. This is picked up by the antennae that appear to be organic parts of their bodies, causing them to writhe in delight, and the images appear on screens embedded into their abdomens. Why Western men gave up on war

Everything in this aimless, media-loving, robot-tended cyborg existence is overseen by the most benign imaginable surveillance device: a baby’s face, smiling and gurgling inside the warm, life-giving sun. It’s a vivid picture of a population contained within a heavily controlled environment structured around meeting their needs, where activity is mostly consumption-oriented and pre-programmed by third parties.

In this sense, it’s perhaps no wonder small children responded enthusiastically to it. The years between Trapdoor and Teletubbies reboot also saw an immense growth in infants attending nursery. In 1981, only 24% of women went back to work a year after having a baby; but by 2001, 67% did so. And Teletubbies is an accurate depiction of the nursery environments that growing numbers of infants experienced under Blair, spurred by a raft of New Labour pro-childcare policies.

In such settings, everything is carefully controlled and focused on amusement for the children. In most cases, children aren’t involved in the work of ordinary life, such as food preparation or cleaning, unless it’s a designated activity. And while care is not exactly automated, there’s more than a nod to industrial-era efficiency and economies of scale. After all, the purpose of nursery is to free up the maximum number of caregiving adults, to do things the wider world deems more “productive” than minding a toddler.

But if Teletubbies offered an upbeat picture for toddlers of the infant childcare experience, the world inculcated by this industrialised infancy has now spread well beyond the nursery setting. And this has arguably been at the expense of our ability to engage in what the generation who watched Teletubbies as toddlers would now call “adulting”.

We’re increasingly enthusiastic about innovations, such as Deliveroo, that give the impression of magically meeting our basic needs at the touch of a button, like the Tubby Custard machine. Five years after Teletubbies, the world gained a Noo-Noo in the form of the now wildly successful Roomba. And the Teletubbies’ cyborg fusion with mass communication increasingly reflects our own relationship to technology. 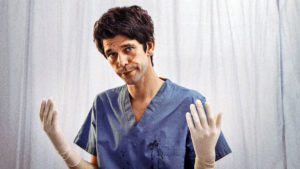 A decade before the launch of the first smartphone, preschoolers all around the world were offered a vision of friendly, child-like entities laughing and playing, with what appear to be organic antenna emerging from the heads and screens embedded in their bellies. Now, 25 years after their launch, millennials check their phones on average 150 times a day and rarely go more than a few hours without a glance at the feed. Meanwhile, “wearables” such as health trackers and (if you’re a certain kind of Silicon Valley dork) augmented-reality glasses have proliferated.

And the drive for ever more intimate integration between “smart” devices and our flesh is ongoing. Elon Musk is lining up human trials of the Neuralink brain implant technology, while a majority of Americans would find implanted brain chips acceptable provided it was possible to deactivate them.

But it’s the automation of nurture combined with cyborg body enhancements that reveals Teletubbies’ most prophetic vision: a world that’s traded love in for technology – and, increasingly, even seeks to reframe technology as love.

For there are no adult Teletubbies. Whenever the Teletubbies go to bed, under their space blankets, there’s no one to tuck them in or read them a bedtime story. And today, if you wish to, you can raise your human child in a similar way: the Luka owl robot reads bedtime stories to children. The $1000 ‘Moxie’ robot even promises to help your child with “social-emotional learning” if you’re too busy to do so yourself.

Do the Teletubbies ever long for a hug from an adult? Perhaps not; they delight instead in  media broadcasts from the human world to their cyborg stomach-screens. And in the absence of adult care, they turn to one another for comfort: each show ends with a Big Hug, and the narrator’s declaration that “The Teletubbies love each other very much”.

Children aren’t Teletubbies, though. The first generation of children to be sent en masse as infants to a human version of Teletubbyland are now in their mid- to late twenties. There’s plenty of evidence to suggest that full-time nursery care has no impact on academic performance, and may even improve outcomes in some cases. But other infant experiences are harder to quantify.

I wonder, sometimes, whether there is any connection between the proliferation of “self-care” content online, and the sharp increase circa Teletubbies in young adults who spent their infancy in a setting maximally geared to their safety and entertainment, but less well-resourced in terms of loving, attuned care. This is sensitive territory, as most parents are acutely torn on how to do the best for their families while making ends meet. But I still wonder.

If there is a link, perhaps it’s not so much that Teletubbies was created for ravers, as that it offers comfort of sorts to those in that delicate post-rave condition of self-inflicted chemical imbalance.

This condition can leave one both desperate for a hug and strangely unable to ask for one. And here was a show that said: don’t worry, be more Teletubby. You don’t really need an adult to care for you, any more than you did as a toddler. But nor do you need to be one – because the machines will take care of us. We’ll get Deliveroo, give each other a hug, and leave the adulting till tomorrow. Look – bunnies and Tubby Toast. Eh-oh!