Over the last decade or so, there has been a boomlet in popular culture in dramatic depictions of the Vikings, the modern name for the pre-Christian Norse inhabitants of Scandinavia. They’ve inspired countless recent films and TV shows, from Vikings, based on the sagas of Ragnar Lodbrok, to Robert Egger’s incredibly historically accurate The Northman. Norse paganism is even practiced in America, and within the US military. But despite their popularity, it appears we cannot cope with the truth about Vikings.

The reality is that the true Vikings were far stranger to modern sensibilities than we wish to acknowledge, a fact reflected in our aversion to the highly realistic but alien world on display in The Northman — which enjoyed less-than-stellar box office returns. By contrast, Vikings did brilliantly, despite taking many dramatic liberties with both history and anthropology in service of today’s culture war. It’s clear that nobody is interested in watching a visual dissertation on Scandinavian Iron Age culture.

The pagan raiders in Vikings reflect the passions and priorities of the modern world. This perhaps explains their attraction: Vikings can be reshaped to our sensibilities in a way the more concrete Christian European civilisation that they ravaged could never be. We know the mind of St. Thomas Aquinas, the heart of the troubadours, while the God of the medieval world still reigns supreme even today. But the Vikings are comparative ciphers, mostly perceived through the mute witness of archaeology and the propaganda put down by their Christian enemies.

The sequel to Vikings, Vikings: Valhalla, highlights and extends the series’ malleable vision of reality. It is firmly grounded in rich historical detail and actual figures from the late Viking Age, but it rearranges and transmogrifies them to a large extent. The series revolves around the interlocking relationships and entanglements between three characters, Lief Erickson, Harald Hardrada and Freydís Eiríksdóttir. Yet the execution is not of true Viking history, but a fictional drama set in a Viking-themed universe of our imagination. Erick the Red’s children were born 45 years before Hardrada, and we know Lief died when the future Norwegian king was five years old. Vikings: Valhalla glosses over these details, as Lief becomes Harald’s younger protégé and Freydís Harald’s enthusiastic but troubled lover.

But these are not the only liberties taken in the show. Freydís becomes a shield-maiden, one of the ubiquitous female warriors from the original series. Though there are descriptions of female warriors in the sagas, the extant historical and archaeological evidence does not reflect a surfeit of women bearing arms in the Viking world. Fighting was generally the affair of men in the Viking Age, and raiding, in particular, was the province of adolescents who had to establish their bonafides and make their way in the world.

The presence of shield-maidens in the two Vikings series is due to 21st-century Western penchant for “butt-kicking babes” in film, often inexplicably depicted by svelte model-actresses like Frida Gustavsson, who plays Freydís. Gustavsson as an archer is a striking image, but standing 185cm high and weighing 61kg, her fighting prowess against large powerful men is totally implausible. At least Gwendoline Christie, who played Brienne of Tarth in the genuine fantasy series Game of Thrones, seems a creditable warrior, weighing 25kg more than Gustavsson.

If the sexually liberated shield-maidens channel 21st-century liberal feminism, then the character of Jarl Estrid Haakon, who rules the fictional multicultural trading city of Kattegat, reflects 21st-century Western racial progressivism. Estrid Haakon is played by Caroline Henderson, an actress of mixed Swedish and black American heritage. Setting aside the fact that there is no evidence of women rulers during the Viking Age, the controversial aspect of Jarl Haakon’s character is her racial identity, especially considering that elements of her biography seem drawn from the life of Haakon Sigurdsson, a 10th-century ruler of Norway. The stereotypical Viking is blonde and fair, the epitome of the Nordic ideal. Jarl Haakon in Vikings: Valhalla is none of those things, while her mercantile city reflects her own racial cosmopolitanism.

Though Kattegat is fictional, the idea that there might be a Viking trading entrepôt with racial and ethnic diversity is not entirely constructed out of thin air. Nearly 1,000 years ago a woman who was likely Indian was buried in a cemetery in Zealand, the island on which modern Copenhagen is situated. Additionally, vast caches of Middle Eastern and Central Asian coins are found across Baltic ports, the consequence of a rich Eurasian trading network extending as far west as northern Scotland with ties to the Islamic Caliphates to the south.

But the past is a different country. Today when we think of global trade we couple it with mass migration and multiculturalism, as the three are necessarily connected. This was not the case 1,000 years ago when Vikings roamed the world as raiders and traders. Though L’Anse aux Meadows in Newfoundland is the most famous Norse site in North America, it seems likely that these western Vikings ranged into the Arctic, with artefacts found on Baffin Island. And in 913 AD, 500 Rus ships ventured down the Volga and into the Caspian, raiding the Persian city of Gorgan, on the border of modern Iran and Uzbekistan. There is a distance of nearly 10,000km between Newfoundland and Iran, 25% of the earth’s circumference.

And yet the Norse from the Atlantic to the Caspian were united by a common culture, a set of folkways, language and religion that likely had its roots as far back as the Scandinavian Bronze Age 4,000 years ago. In The Northman there is a scene where a woman is sacrificed on a burning ship with a horse to honour the passing of a nobleman, in line with the Arab Muslim Ibn Fadlan’s account of a ship burial in 10th-century Tartarstan, in the Volga basin. But aspects of these death rites are far older, with the killing of the horse in particular a cultural remembrance of a primal Indo-European ritual. In another scene, The Northman depicts an Indo-European warband induction, with howling young men wearing wolf and bear skins around a fire, reminiscent of the Vedic Ekāstakā mid-winter ceremony, when 16-year-old boys were initiated as roaming “dog warriors”.

The deep roots of Viking culture should not be surprising: genetics make it clear most of the ancestry that we today associate with Scandinavians arrived in the wake of the original Indo-European expansions out of modern Ukraine 5,000 years ago. After 500 AD, DNA evidence points to subtle differences between the peoples who we would later term Norwegians, Danes, and Swedes. (The term Viking points to an action rather than an ethnicity, as tribes like Danes, Geats and Swedes would go on Viking voyages to distant shores to hawk their wares and plunder booty.) And yet despite the ethnic and genetic distinctions that arose, the world of The Northman is unified in being an organic outgrowth of the Nordic Bronze Age, itself one of the innumerable children of the Indo-European expansions.

This Viking world was not the antithesis of Latin Christendom, as depicted in Vikings: Valhalla, where the sexually liberated pagan religion of the Norsemen (stand-ins for tolerant modern pluralistic Westerners) is set against the intolerance and brutality of the new Christian faith. Rather, it was a parallel universe of primal Indo-European religion and culture untempered by the sophistication of Mediterranean Europe. It was as if Hindu India was stripped away of the philosophical sophistication of the Puranas, the religious revolution of Buddhism and the introspection of the Bhagavad Gita. 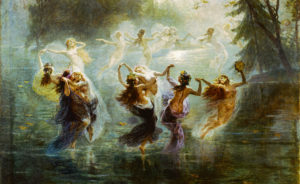 In this the Norse were unique in western and northern Europe. Even the Irish and the Germans were influenced by Romanitas at a remove: the former adopting the Roman religion without threat of conquest, the latter turning the famous Roman limes into a porous and profitable border that stimulated cultural synthesis. Before Hermann led his Germans against Augustus Caesar’s armies, he was Arminius, who learned Latin, received Roman citizenship and served in the Roman army.

The Vikings did not have any truck which such hybridity. They swarmed out of their dim peninsula covered in tattoos, worshipping gods that would not have been out of place in the Iliad or the Vedas, and honoured them with sacrifices of horses. Whereas the men and women in Vikings distill sensibilities of the New Age tempered with helpful dollops of choreographed mass violence, the true Vikings, as depicted in The Northman, were creatures of an old age, a prehistoric world that somehow persisted down to the edge of history, witnessed with horror and incomprehension by the believers in the God of Abraham.

And even if in our age God is dead, the old instincts are strong, and we cannot bear to confront the strangeness of the pagan past head on. Today, the Vikings remain an enigma: we see them only in shadows and glimmers, turned into didactic instruments in the service of culture wars they would not have comprehended.