On Thursday, Donald Trump made the “major announcement” on Truth Social that he’d teased the day before. Since declaring for the 2024 presidency in mid-November, he’s done precious little campaigning; many expected him to release rally dates or issue some sort of platform. Instead, he informed his supporters that they could purchase Trump-themed NFT trading cards for the low price of $99.

It was a farcical conclusion to a very bad week for the former president. Earlier in the week, USA Today published a poll finding that Republican voters preferred Florida governor Ron DeSantis to the ex-president by a 2-to-1 margin, 56% to 33%. Early hopes among Trump die-hards that this result was “biased” were then thoroughly dashed on Wednesday, when the Wall Street Journal and CNN came out with polls showing strikingly similar results. In the Journal poll, DeSantis led Trump 52-38. CNN worded its questions differently, but found that Republican voters preferred a “different candidate” over Trump by a 62-38 margin. DeSantis was the most popular alternative.

It is a dangerous business to predict the political demise of Trump, who has been making pundits look stupid since he stepped onto the national stage. Few took him seriously as a candidate when he first declared in 2015, few believed he could defeat Hillary Clinton in 2016, and few believed he could come within a few tens of thousands of votes of re-election in 2020. But this time is different. Trump really is done. 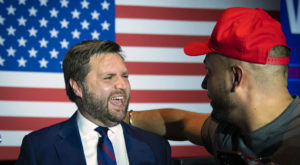 Ohio and the battle for populist America

Analysis of his political fortunes has always been somewhat distorted by the fact that he is universally loathed by the American media class — or at least those who exist outside the self-contained bubble of conservative media. How could people vote for such an obviously unfit candidate? Well, pundits said, because they were racists, or economically anxious, or conspiracy-addled lunatics in thrall to lurid theories about paedophile elites. Perhaps it was because the Left had become too woke and abandoned the working class. But, surely, the man was so ludicrous and criminal that the American people would eventually come to their senses and chuck him out.

The truth was always a lot simpler. Most Trump supporters — aside from a numerically small but electorally important slice of Obama-Trump voters in the Midwest — liked him because they were Republicans and he was the Republican candidate. Recall that Trump won a plurality, not a majority, of the GOP primary vote in 2016, and that was against a fatally crowded establishment field — similar to what Bernie Sanders accomplished in 2020 before Barack Obama intervened to unify his party’s establishment behind Joe Biden. But the voters who backed other GOP candidates were not about to cast a vote for Hillary Clinton, no matter what Trump did or said.

Once Trump was the nominee and, later, the president, the most powerful force in American politics, negative partisanship, was there to do the heavy lifting. For most Right-leaning Americans, you could always tell yourself something along these lines: “Sure, Trump is a loose cannon with a complicated relationship to the truth. But I like his policies, the economy is doing great, the media is biased against him and exaggerates his flaws, and in any case, better him than a Democrat.”

Trump’s talent for polarising the entire political field made it easy for him to shore up Republican support. Whatever he did, good or bad, one could be sure that at least one prominent Democrat (and probably more than one) would respond with something so outrageous to the sensibilities of Republican voters that they would feel they had no choice but to support their man.

Then, 2020 changed all that. There was, of course, the loss itself, the refusal to concede, and the debacle of January 6, although the latter meant more to voters who were already inclined to dislike him. The bigger problem for Trump was simply that he was no longer president. No more White House press briefings, no more Twitter account, and no more 24/7 Trump news cycle, despite the best efforts of CNN and the January 6 committee. Trump was, of course, still the most famous Republican in the country, and still beloved by most of the base — for a time. But for a man whose singular political genius was his ability to command attention and turn it to his advantage, being one option among many for 2024 — not to mention one with eight years of political baggage in a country where voters are notoriously fickle — was always going to be an uphill battle. It took the midterms and their aftermath, however, to deliver the death blow. Everyone in the GOP knew that Trump had backed a number of bad candidates in winnable races, but in the last few months before the election, most believed the hype about an incoming red wave (I did too). But the red wave was fake news, and Trump candidates sank the GOP ticket in major swing states such as Pennsylvania, Georgia, and Arizona. Trump responded by lashing out against DeSantis, one of the few Republicans to make an impressive showing in an otherwise disastrous year. In 2016, he had ridiculed candidates such as Jeb Bush and Marco Rubio, and it had worked because voters believed in their hearts that they really were low-energy losers. Now Trump was the loser attempting to bully the winner, and the jokes weren’t funny anymore.

The month and a half since the midterms has been one long, rolling disaster for Trump. Against the wishes of his advisors, he announced his reelection bid barely a week after the electoral bloodbath, earning the endorsement of only one senator. Rupert Murdoch abandoned him. His company was found guilty of criminal tax evasion in Manhattan. He hosted Kanye West and the white nationalist Nick Fuentes in Mar a Lago; following a massive backlash, his camp was forced to claim that he had been tricked by the rapper’s entourage, only for Kanye to go on Alex Jones a few days later and sing the praises of Hitler. After the release of the “Twitter Files” — internal documents relating to the company’s decision to ban Trump after the Capitol Riot — Trump seemingly called for the suspension of the Constitution. By the time he announced the NFTs, it was hard not to wonder if even he had given up hope.

If Trump were still president, no doubt he’d be able to rally more support. But he’s only an ex-president, and one who seems more embittered and desperate by the day. Unlike in 2016, he only has one rival. And unluckily for Trump, DeSantis looks like a man who can win.