Autogynephilia — literally “to love oneself as a woman” — is controversial stuff. Men are not supposed to fancy themselves; at least they weren’t when I grew up in the Eighties. Back then, the idea that any of us might be “sexually aroused by the thought or image of our self as a girl” was unthinkable.

Kathleen Stock recently suggested in UnHerd that autogynephilia (AGP) was a motive for “some but not all within the male trans demographic” to immerse themselves in the fiction of changing sex. Ray Blanchard, the sexologist who coined the terminology, went further. Last year, he told me that “in the Western Hemisphere and English-speaking Commonwealth countries, the overwhelming majority of adult natal males presenting with gender dysphoria are of the autogynephilic type”.

More than 50 years later, I can still picture the scene. I was learning to count beyond 20, and quickly picked up the pattern — 30, 40, 50 — and the repetition. But by the time we got to 60, a chill ran down my spine. We would soon be at 80 — a word sounded similar to “tights”, clothing that I knew was only for girls.

Why this was such a taboo for me, and at such an early age, I don’t know. Clearly I understood the difference between boys and girls; I knew I was a boy, and I knew that we wore different clothes. But I wanted to wear girls’ clothes, something I knew was forbidden. I cannot remember being told such things, but nobody had told me how to breathe either, or know how to feel hungry or thirsty, or go to sleep when I was tired. But every other sexually dimorphic species needs to know the difference between the sexes without being schooled on it. Why should human beings be different?

Clothes were the issue for me throughout childhood. But I had no sisters and I had to make do with my own fantasy world. During primary school, however, I stumbled upon two opportunities to turn that fantasy into reality. I remember them like oases in a desert. 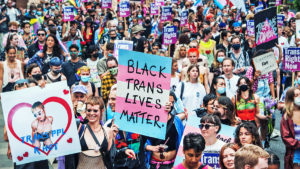 Stop saying the UK is transphobic

First, there was a village fete where my ladybird costume involved wearing a tight black jumper and black tights. The red papier-mâché on my back was incidental. Adrenaline overwhelmed me, but I was too ashamed to tell anyone. I was probably aged six. Three years later, a school Christmas play offered another cross-dressing opportunity. Nothing special – I was a carol singer – but for some long forgotten reason, the boys were dressed the same as the girls. But by then I was imprisoned by my own fear and never took the message home. My costume was never made and I played my role in mufti.

In those days, an interest in clothes of the opposite sex was labelled as transvesitism, something distinct from transsexualism, a compulsion to be the opposite sex. But in reality, the two conditions are not so easy to separate. Transvestites may have been ridiculed, while transsexuals were pitied, but there is truth behind an old joke in the trans community: What’s the difference between a transvestite and a transsexual? About five years.

These days it seems that we are all transwomen, which may remove the need for any demarcation, but also removes the need to think about AGP. However, while language may change, human nature remains the same from generation to generation. In a 2005 study of 2,450 Swedish adults, Långström and Zucker found that almost 3% of men “reported at least one episode of transvestic fetishism”. I wonder how many more did not report their furtive activities? Whatever the truth, this behaviour appears to be rather more common than the 0.3% to 0.7% “tentatively” estimated by the UK government in 2018. My experience alone suggests that boys wrestle with AGP long before puberty. But it was during adolescence when my long-running fantasy — usually of waking up to find myself magically transformed into the other sex — became a compulsion to start buying female clothes. By the time I was 16, I would travel to neighbouring towns, buy what I could and squirrel my purchases away in intricate, secure hiding places. Being discovered was the most shameful thing I could imagine. At no point did pornography play a part — this was the Eighties and I had no access to it. The compulsion came from within: my thoughts were driven by my own nature.

Life is very different for children growing up today, and not always in a good way. Transitioning was never an option for me as a child so it was futile to go beyond dreaming about it. Instead, my energies were directed into my studies and my relationships — and keeping my AGP well hidden. The mental stress was incessant.

But I endured. I eventually married a woman, and we had three children. Those four people mean the world to me. Autogynephilia drifted in and out of remission but it never took over. At least not until the internet connected me to other people who had transitioned and had made it work. These were not the exotic transsexuals that I had read about in the Sunday People — high-life celebs who had sex-changes in Casablanca. They were people just like me — engineers, medics, teachers even — who had gone to their GPs to ask for a referral to an NHS gender clinic. When I knew that medical and surgical transition was possible, it rapidly became irresistible. But what opened up to me in mid-life, now beckons to children. I worry about both sexes. In her superb book Irreversible Damage, Abigail Shrier explores on the transgender contagion among teenage girls. But what about boys particularly those struggling with AGP? These days they might be adorned with new labels — trans girls — but the condition is the same. Who is looking out for them? Who is counselling those who come forwards, and how are they being counselled? I cannot do it — I am no therapist — and I firmly believe all AGP adults, indeed all transsexuals, should stay clear. We come with our own baggage and children need to be able to focus on their own issues when they see a counsellor.

When I was young, I coped because I had to cope. What alternative was there? But it would have helped me to know what was really going on. The tragedy is that the current generation of AGP boys are none the wiser. Either they are cooped up behind the same walls of shame and guilt that constrained me 40 years ago. Or they have been affirmed as “transgirls”. Or they are simply at a loss to understand themselves, feeling like an introvert among a party of extroverts.

These boys need help to understand themselves. Let’s not amplify their daydreams — fantasy does not become reality. But let’s not embarrass or monster them either. We need to be honest: autogynephilia is a psychological condition that we just have to live with. Some may end up transitioning in the end — we cannot put that particular internet genie back in the box — but that is a decision for adults to take, not children. If first do no harm, then second, let them at least grow up.