In the room where I write there’s a portrait that might well get me ostracised from certain intelligentsia circles to which — for the time being — I belong. Few would be in any doubt about whom it depicts. Nevertheless, a caption helpfully identifies the subject: “ایلزبتھ دؤم پاکستان کی ملکہ ۱۹۵۲ – ۱۹۵۶”.

Wholly forgotten amid the Jubilee celebrations was the fact that, when the Queen acceded to the throne, she became sovereign not only of the UK, but also of a Muslim nation from which a million Britons like myself hail. The caption, for those who don’t read Urdu, translates as: “Elizabeth II, Queen of Pakistan 1952 – 1956.” It is the most remarkable detail in the chronicle of the Queen’s reign which began in February 1952, just as my father was born in a village in East Pakistan that through the strange meanderings of history was located in her dominions. My family’s fate has, ever since, been twinned with Her Majesty’s.

Of all the titles Elizabeth Windsor acquired on her father’s death, “Queen of Pakistan” would be the shortest-lived. The monarchy of Pakistan, founded in 1947 as a homeland for India’s down-trodden Muslims, was quickly abolished. In time, so was the country itself, most of its population seceding to form a new country (Bangladesh). Although a rump state still claims the name Pakistan, the country of my parents’ birth no longer exists. Yet its sometime sovereign, Elizabeth II, miraculously lives on — the only remnant of the original Pakistani state as it existed before its collapse in civil war and genocide.

That national failure led to my parents’ emigration to the UK, and so my family fell once again under Her Majesty’s reign. They were “New Commonwealth immigrants”. But my father was truly a New Elizabethan, among the first subjects to be born under the new Queen — and born British, since the Nationality Act of 1948 established, with astonishing magnanimity, a common citizenship for the whole British Commonwealth. Three generations of my family have been born subjects of the same Queen, while a full five generations have lived under her reign, in the UK or the erstwhile Dominion of Pakistan.

In all this time, the monarchy has been the dominant political fact in our lives. The labels on our passports — India, Pakistan, Bangladesh, the UK — have changed more than once; with the potential break-up of the United Kingdom they may do again. But while countries and their borders, governments and their ideologies, come and go, the one unfathomable fact that endures is the monarchy, whose legal subjects British-Asians have been ever since India was annexed more than a 150 years ago. And this legal relationship stretches back even further for those of Caribbean heritage, as far back as the 17th century.

No-one can claim the relationship began consensually. But whatever the iniquity of our initial subjection to this crown, it is that same crown that now guarantees our equality in this land. The Proclamation of 1858 that made my ancestors British granted them the exact same rights as all other subjects. It was Queen Victoria herself who had insisted on Indians “being placed on an equality with the subjects of the British Crown”, words that would be recited by Indians at political gatherings. The principle was frequently ignored, but it was, as Gandhi put it, our Magna Carta, an assurance of equal treatment, decreed by the highest possible source, that still holds true today.

Monarchy, the philosopher Roger Scruton wrote, “is the light above politics, which shines down on the human bustle from a calmer and more exalted sphere”. There’s something strangely celestial about that description, but he was onto something. As Shakespeare observed, “there’s such divinity doth hedge a king”. Elizabeth II is Dei Gratia Regina (“Queen by the grace of God”) and as even the imam of Cambridge mosque preached on Friday, “she is a servant of the Almighty Allah”. If, in our secular age, there can no longer be God-given rights, the monarchy’s pompous charade of divinity makes it the closest thing we have to an absolute — and that is what I’d like my rights to be.

Minorities don’t trust the “human bustle” — which is all we would have without a monarch. From history we learn that wherever a throne is eliminated, in due course so are ethnic minorities. Consider the multiculturalism of Mitteleuropa under the Habsburgs or of southeastern Europe under the Ottomans. A dozen languages were spoken in the imperial parliament in Vienna, while on any given day in an Istanbul cafe conversations could be heard in Turkish, Ladino, Greek, Armenian, French and Kurdish, at least. But since republican governments replaced these monarchies, the fate of every 20th-century cosmopolis on the continent has been one of merciless homogenisation through ethnic cleansing, population transfers or socio-economic strangulation. 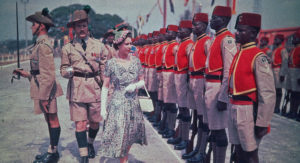 There’s a kneejerk association of monarchy with nationalism. But the two have mostly been pitted against each other since the imperial age in which European monarchies transformed into continent-spanning empires characterised, especially in the British case, by free trade and free movement. Nationalists opposed the cosmopolitanism and pluralism of these empires, eventually corralling their multiethnic populations into new nation-states, republics in the main, which now struggle to cope with a fraction of the ethnic diversity that their territories previously boasted under imperial rule.

Conservatives today won’t own up to a truth of which they should be proud: the original basis of our multicultural society was the imperialist, royalist ideology of High Toryism. This becomes clear from the debate around the Nationality Act of 1948 that enabled my father’s emigration. It was then the Conservatives who worried about Labour reforms destroying “our proud boast of the open door in this country to people from all the colonies”. The parliamentary statement by Lord Kilmuir, as Shadow Home Secretary, deserves quoting at length:

We deprecate any tendency to differentiate between different types of British subjects in the United Kingdom. We feel that when they come to the UK there ought to be an open door and reception for every type…We must maintain our great metropolitan tradition of hospitality to everyone, from every part of the empire.

What united — and still unites — all these disparate people is the Queen, mere loyalty to whom makes us all British. Our oath of allegiance is to “Elizabeth II, her heirs and successors” — no more, no less. The symbolism of that is profound. It means my mother, a hijab-wearing Bengali Muslim woman who speaks little English can be unimpeachably British in a way she could not be unimpeachably French (even her clothing would not be deemed in keeping with “Republican values”). The simplicity of our oath is one of our constitution’s forgotten jewels, its tolerant spirit generally diffused throughout the state — a state that isn’t truly a nation-state since it claims four different “home nations”. Apart from Scotland, all have an underwhelming sense of nationality. As Daniel Defoe’s ditty scorning English nationalism went:

A true-born Englishman’s a contradiction,
In speech an irony, in fact a fiction. By contrast, the nation-states born of decolonisation in the last century demand of its citizens fealty to a nation, that nation commonly being defined in ethnically exclusive terms. In Viktor Orbán’s Hungary, the Roma minority that once had only to express loyalty to the emperor is under pressure to become Hungarian. These are societies at the mercy of ethnonationalism and xenophobia, lacking that impartial light of monarchy which, at its best, allows people of all races and religions to appeal to something beyond their differences from one another.

These unstable political forces haven’t been totally absent even in our tolerant monarchy. In 1968, targeting East African Indians, the Labour government consciously restricted dark-skinned British passport-holders from entering the country, legislation which even the anti-immigrant firebrand Enoch Powell considered, in some of its clauses, to be comparable to the Nuremberg Laws. Still, shortly afterwards, Powell made the ‘Rivers of Blood’ speech that made him the biggest name in UK politics.

Powell envisioned a renewed English nationalism, which arose from a disillusioned critique of imperialism not unlike those taking place in former colonies. He came to believe that the foreign adventure of empire — Powell was a veteran of the Indian Army — had suppressed English identity. Decolonisation was an occasion to rediscover it, as if it were an old oak in an abandoned garden. He railed against the “bogus mythical self-consoling invention of the British Commonwealth”, against the Queen’s new role as its Head, and of course against Commonwealth immigrants. The irony is that Powell could have made the same arguments as an Indian, say, and been regarded as a fairly standard postcolonial polemicist.

Queen Elizabeth deserves credit as probably Powell’s most successful adversary in those turbulent decades. She single-handedly preserved the old imperial High Toryism which Powell and later Tories had turned against, using her charm to launder out of it the darker stains of imperialism. Whereas for Powell, the nation-state was “the ultimate political reality”, for Elizabeth it was the British Empire in its new, egalitarian guise, the Commonwealth. In her famous broadcast on her 21st birthday, Princess Elizabeth pledged her life to serving “all the peoples of the British Commonwealth and Empire, wherever they live, whatever race they come from, and whatever language they speak”. The importance of being British

Of course, the Queen never addressed him directly, but she was shadow-boxing against Powell’s English nationalism. Powell’s ravings grew more virulent. “It is truly when he looks into the eyes of Asia that the Englishman comes face to face with those who would dispute with him the possession of his native land,” Powell would bellow. But all the while, Elizabeth would reaffirm her own commitment “to that new conception of an equal partnership of nations and races”.

Eventually, Powell’s decorum yielded. In 1984, he attacked Queen Elizabeth — from a family of immigrants herself — using a phrase that would later be invoked, knowingly or otherwise, by Theresa May: “citizen of nowhere”. She was, Powell claimed, more concerned for “a vociferous minority of newcomers than for the great mass of her subjects…threatening the place of the Crown in the affections of the people” — a prediction that was utterly refuted by the jubilant Union Jack-waving of millions over the holiday.

Like most, at times I found myself chafing against the kitschier aspects of the spectacle. But then, when I saw the circle of saffron-robed sadhus from Gujarat at Neasden’s Hindu temple ignite a sacred flame in honour of the Queen, I remembered all over again what the lighting of all those beacons truly symbolised: a celebration by our motley, many-hued human bustle of the light that shines above it.