Regardless of what he says, the Prime Minister’s time as a mover of events, rather than a prisoner of them, is up. That fate was inevitable from the moment a young Boris Johnson declared he would be “world king” one day.

When he made that announcement, his family was unravelling due to his father’s philandering. The boy’s response was to make himself “unhurtable, invincible, somehow safe from the pains of life…”, according to his mother when she resurfaced after an eight month disappearance. His desires betrayed his insecurities. If he could not be loved, he would be powerful.

The armour plate little Boris chose to cover these scars was Winston Churchill. It was always Churchill: Britain’s last world king. Absent a mother, he discovered a hero. Self-pity was sublimated into the desire for glory.

Classical heroes conquer or bewitch their peers, they never compete with them. They are above the futile jostling of general life. They emulate backwards. Alexander the Great looked to Achilles; Julius Caesar looked to Alexander, and wept at his tomb; Napoleon looked to Caesar, and Churchill to Napoleon, whose glaring bust followed him around Westminster for decades.

Johnson decided to emulate Churchill — “the greatest statesman Britain had ever produced” — and stitch himself into this gold thread. Churchill was a holy presence in post-war childhoods. Boris memorised the captions of Churchill picture books. Fathers read selections from the Great Man’s speeches to their sons. Boys in the Sixties imagined themselves piloting Spitfires over green Sussex, as the sonorous, rousing, words of Churchill echoed in their heads.

Boris never asked if he was emulating an illusion. By Eton his wish was Churchillian. Become Prime Minister. Win. The clown fez he wore for the next 40 years distracted his contemporaries from this ruthless fixity of purpose. 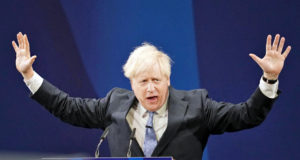 Boris Johnson’s speech was a joke

That’s not to say this ambition was ever hidden. “My silicon chip”, he told Sue Lawley on Desert Island Discs, “has been programmed to try to scramble up this cursus honorum, this ladder of things”. Churchill proved indispensable to the climb.

Other Prime Ministers were haunted by Churchill (Thatcher), recklessly invoked him in wartime (Blair), or paid oily tributes to him (Cameron). On the fiftieth anniversary of Churchill’s death in 2014, Johnson one-upped them all when he wrote a bestselling biography of his hero, and the tribute act reached a new stage.

The Churchill Factor was not about Winston Churchill. Faced with the man’s knotty and tragic life, Johnson turns away, blows raspberries with the material, and writes like P.G. Wodehouse. Churchill is the “beaver who damned the flow of events”; he is “like some burly and hungover butler from the set of Downton Abbey”; he is simultaneously a “crowbar of destiny” and a “hyper-gravitational astral body”. Johnson can doodle silly expressions on portraits of an icon — some of them are even snigger-worthy — but he cannot get close to the man. To do so would be to look in a mirror. Johnson thinks he is attracted to Churchill because he was a hero, “the man who led my country to victory against all the odds”. More than a warlord, Churchill was the “best speaker, the best writer, the best joke-maker, the bravest, the boldest and most original” — all qualities Johnson would like us to associate with Johnson. He interposes himself into Churchill’s life, like a leaf pressed between the pages of a diary, then winks at his readers.

Churchill, wrote Johnson, was the “inevitable” Prime Minister. By 1940 there was only one “man for the moment”. When Brexit was deadlocked in 2019 Johnson’s association with Churchill, the assiduously spade-worked notion that, give or take some hair, they were the same man, cashed out spectacularly. The mantle of inevitability passed to Johnson.

His supporters believed that Boris was walking with destiny. Charles Moore used to tell anyone who would listen that Boris was a let down. Then the wastrel became Winston. Moore hailed the “controversial untrusted man who got it right, leads, unites the country, wins”. The “blond magnificence”, Tim Stanley wrote in October 2019, ought to be recognised for “the Churchillian figure he is.” (This week Tim was forced to concede that Johnson had become a more Chamberlainite “toast”.) It becomes clear that Johnson does not understand why Johnson is like Churchill. They are spookily alike, but not due to their maverick political careers, not for the doughy and obvious reasons. You have to go back to the beginning. Churchill suffered through his own version of Johnson’s youth of neglect and distress. “Famous men are usually the product of an unhappy childhood”, writes Churchill in Marlborough.

Unhappiness evoked the same ambitions in Churchill as it did in Johnson: the conscious decision to be a classical hero, with all the ruthlessness and coldness such a choice results in. “He is bound to emerge historically as a romantic and glamorous figure”, wrote one sympathetic observer of Churchill in the Thirties, “but he is surrounded by corpses.” Suicides close to Winston Churchill included a brother-in-law, a former stepfather, a daughter’s lover, a former daughter-in-law, a son-in-law and a daughter. Johnson leaves behind two cratered marriages, and anguished relations with his platoon of children. I can picture both men wondering if this is the cost of greatness. The callousness of Johnson and Churchill was leavened by self-mocking qualities. Their vanity was excused by humorousness. Their witticisms are collected in stocking-filler pamphlets, like Tory Wildes. Often, both are compared to babies. Johnson, one biographer reckoned, was defined by “neediness”. Neville Chamberlain believed that Churchill, to the agony of his colleagues, was a “wayward child”. The Financial Times thought Johnson was a “man-child politician”, always on the cusp of having his ambitions devoured by his own gross appetites. During the war, Stalin’s ambassador in London, Ivan Maisky, noted that “something of a small boy” lived on in Churchill. They are half-omnipotent, half-helpless. They looked at all times like overgrown toddlers. Ultimately, everything was subordinate to the small boy’s dream of glory and prestige.

Now that half his party is trying to slaughter its chief, The Churchill Factor makes for weirdly poignant reading. If Johnson hadn’t chosen all this you could almost feel sorry for him. “I think he doesn’t really know what he wants,” wrote Johnson about Churchill, and himself. They both just wanted more of whatever it was — acclaim usually — whenever they could grasp it. Such behaviour in peacetime, notes Johnson eight years before Partygate, “can be disastrous”.

You become what you pretend to be. Johnson never really thought beyond Churchill the world king, hero of the finest hour, the growl on the radio. By emulating Churchill’s optimism, patriotism, and hopefulness, Johnson could finish Brexit, and take his historical place next to the most famous Englishman of all. Once he became Prime Minister, his inner world of make believe appeared congruent with reality at last. Johnson fantasised about monuments to himself, says Dominic Cummings. Johnson bumbled around Number 10, musing that the people would remember him after his death, like a Roman Emperor. Or Churchill. The version of Winston remembered by Britain, and imitated by Johnson, is a false one. The picture is incomplete. In his last years Churchill said over and over again that he wished he had died in 1945. His beloved Empire was being dismantled. Communists dominated most of the Eurasian landmass. Socialism appeared to be the future of British politics.

Heroes are not supposed to go on. Either they die young, like Alexander did at 32, or their ludicrous self-image cannot be maintained in the face of the reality of the world. After a certain age, failure sets in like frost.

Imagine, then, if Boris hadn’t survived Covid. A Prime Minister sacrificed for his people. All those early pandemic photos of Johnson bouncing unmasked through hospital wards suddenly charged with saintly light. Nothing beatifies, or erases error, quite like death. A romantic-cynical end, but then, as Johnson said: “All romantics need the mortar of cynicism to hold themselves up.”

Instead there is no romance. Only cynicism. He recovered, and received cake in a Tupperware. There will be no Downing Street booze ban, he says, because Churchill needed his brandies during the war. Johnson ends up resembling the post-war Churchill. Not heroic, but hamstrung. Confused and tortured. He can announce policies, make speeches, and sit on tiny chairs when he makes school visits. But the overall sense is of a man past his peak, his historic purpose fulfilled, limping on purposelessly, a hero out of time.