In the hit French television series, Le Baron Noir, unifying the Left is the holy grail of the main protagonist, Philippe Rickwaert. His main obstacle is Michel Vidal, the vain and uncompromising founder of Debout le Peuple, determined to steal the position of leader of the Left from the Socialists.

Running from 2016 to 2020, the irony of Le Baron Noir won’t be lost on anyone in France today. Reality has diverted wildly from fiction. The character of Rickwaert is said to have been based on Julien Dray, a long-time member of parliament for the French Parti Socialiste (PS). His rival Michel Vidal is based on Jean-Luc Mélenchon, the leader of the New Ecological and Social People’s Union (NUPES). But real world truths are stranger than fiction. It is Mélenchon, not the socialists, who has achieved the long-held dream of bringing the French Left together. And it is Mélenchon who has shown the sort of ruthlessness and cunning worthy of Le Baron Noir.

Many had written off the French Left, associating its fortunes with the now defunct Socialist Party. But the decline of the PS has been accompanied by the emergence of a more radical Left, one whose candidate — Mélenchon — came within a few hundred thousand votes of reaching the second round of the French presidential election last April. By contrast, the socialist candidate, Anne Hidalgo, won less than 2% of the vote, not even one tenth of Mélenchon’s total.

Unlike Corbynism in the United Kingdom and the squad in the Democratic Party in the United States, Mélenchonisme as a political force stands outside of the political mainstream. Its emergence came through the creation of new parties — first the Parti de Gauche in 2008 and then La France Insoumise (LFI) in 2016. There is much in common here with Podemos in Spain. In season three of Le Baron Noir, Vidal travels there in an effort to learn from the successes of a Podemos-style movement. In a further real world twist, Podemos’s efforts to replace the Spanish socialist party, the PSOE, have failed whereas Mélenchon’s bid to do the same in France has been far more successful.

Whether or not NUPES will really challenge Macron’s Ensemble! alliance is uncertain. Mélenchon launched his campaign in these legislative elections with talk of his becoming Prime Minister. After a successful first round where NUPES won a higher percentage of the vote than Ensemble!, it is most likely that NUPES will win enough seats to deprive Macron of an absolute majority in the National Assembly. Much will depend on turnout. At over 52%, abstention in the first round was at a record high, making it harder to predict the outcome in the second round. What is clear is that Mélenchon has managed to get the run off against Macron that he narrowly missed last April: in 278 seats, NUPES and Ensemble! candidates are facing each other in the second round.

Mélenchon’s success raises the question of what NUPES has to do with what R.W Johnson called “the long march of the French Left”. Founded in 1920, the French Communist Party (the PCF) was one of the great mass parties of the Left. Taken as a model for theorising about the nature of mass politics, the PCF was a world unto itself: excluded from power, outdone in its radicalism by the students in 1968, it was nevertheless a constituent part of French working-class culture, both at the workplace and at home. For over 50 years, the French Left was divided between communists, socialists and more radical factions. Can Mélenchon unite the French Left?

Looking for how best to understand today’s NUPES, it would be a mistake to see La France Insoumise as a 21st century reincarnation of the PCF; the ideological and organisational differences are too stark. It would also be wrong to think of NUPES as a present-day version of the 1972 Common Programme, which briefly united the communists and socialists around an agreed set of policies. NUPES is not another step in the long march of the French Left; it is the expression of a much wider unravelling of French politics, which has been playing out on the Right and the Left for the last 30 years.

The demise of the PCF in the Eighties and Nineties left a vacuum in French politics and society. Some PCF voters drifted to the centre, others switched to the Front National as a new home for their anti-establishment protest vote. Mélenchon’s own trajectory is different. A card-carrying member of the Socialist Party for 30 years, he left in 2008 after the party congress revealed how far his ideas were from the mainstream of the party. This century’s populism is the guiding thread of Mélenchonisme, not the connection to the ideologies of the 20th century. LFI’s starting point is not Marxist dialectics or class conflict, but le peuple.

This transformation of the Left began in 2005 and the referendum on the EU’s constitutional treaty held that year in France. The significance of the vote for the EU’s own institutional development was lost on the block’s civil servants and many EU leaders. The Lisbon Treaty, agreed two years later, contained most of what French voters had rejected in the referendum. But the political ramifications of 2005 have been working their way through French politics for the last 15 years. Why Macron is invincible

Mélenchon saw, in 2005, the potential for a new sort of political movement: outside of the French party system, mobilising around ideas of equality and social justice, rooted in disaffection with the country’s main political currents. Something stirred in 2005 and Mélenchon understood it.

Politics is a long game and opportunity finally came with the disastrous socialist presidency of François Hollande. Hollande’s victory owed much to the anti-incumbent sentiment that prevailed in France after five years of Nicolas Sarkozy. Hollande’s principle contribution was to avoid making any slip-ups in the televised debates. This left Hollande weak from the outset and his presidency ended in derision and farce. The image of a soaked François Hollande, struggling through a prepared speech as rain ran down his glasses and face, became a running joke, as did photos of him escaping on a scooter after a night with his mistress. The PS’s fateful performance in the 2017 presidential elections, where its candidate Benoît Hamon won just over 6% of the vote, led to the party’s forced sale of its iconic headquarters on the Rue de Solférino. The LFI was left as the de facto opposition to Emmanuel Macron in the National Assembly.

Since then, the LFI has honed its message and developed its programme. One reason for Mélenchon’s high score in the 2022 presidential election was that he supplemented his earlier populism with an extensive and comprehensive legislative programme. Observers noted that the LFI’s electoral offer was the most sophisticated of all the parties — a total of 694 proposals, from a sixth republic to “rational” anti-terrorist legislation, to a commitment to the demilitarisation of space. Organisationally, LFI bears no correspondence to the mass parties of the 20th century. Established in 2016 as an election vehicle for the presidential election the following year, its broad range of legislative commitments reflect the diversity and heterogeneity of its electoral base. This runs from the remnants of the PCF’s industrial working class votes to the vast majority of the country’s Muslim population, as well as urbanised intellectuals and France’s many neo-ruralist converts. The LFI is a flexible organisation, in tune with the individualism of the present. There is no membership as such. Groups of activists grow or shrink, in line with the electoral calendar. Much of the activism is self-financed and self-organised. Mélenchon gives his approval to initiatives after the fact rather than issuing orders or instructions. Unsurprisingly, there is a very high turnover of LFI activists.

Today’s union of communists, socialists, ecologists and Mélenchonistes has its roots in the ruptures in French politics in the early 2000s. The failure of Lionel Jospin to reach the second round of the presidential election in 2002 and the referendum of 2005 both opened up the possibility of a new sort of oppositional politics, one disconnected from the country’s traditional ideological moorings. Mélenchon’s populism prefigured a similar approach adopted by the “anti-system” candidate, Emmanuel Macron, in 2017. 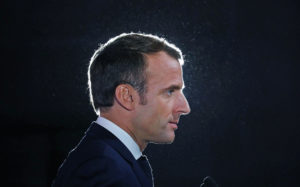 The success of LFI is partly due to its efforts not to breathe new life into the language of the old Left, which may explain why it has outperformed Corbynism in the United Kingdom. To think of the legislative elections as a fight between the three parts of the political spectrum — the Right, the Left and the centre — is akin to picking up the map closest to hand without thinking about whether it is the right map in the first place. Mélenchon has replaced the ideological tradition of the Left with a mixture of charisma and sophisticated policymaking.

This is something he shares with his current electoral foe, Emmanuel Macron. If the results of the legislative elections mean that Macron and Mélenchon will have to work together in some way, then the principle obstacle to this will not be the differences between the two men. Rather, it will be what they have in common: their outsized egos.