Ever since the election of Donald Trump, the putative rise of “white supremacy” or “white nationalism” has been a perennial worry among mainstream pundits, both inside America and abroad. For liberals, the imminent rise of “fascism” serves as a powerful rhetorical device and a political cudgel to be wielded against those on the Right — but even among conservatives there is occasional and genuine concern that racism as a political force might be making an ugly return, especially among the young.

Are people right to worry? Or, to pose the question in a slightly different way, is there really a political future for “white nationalism”? Thankfully, a very recent online controversy sheds a (fairly embarrassing) light on both of these questions. As we shall see, it is indeed true that the internet is filled with politically conscious “racists”, and that the idea of “white nationalism” seems more popular than ever among a certain segment of America’s millennials and Zoomers. But it is equally apparent that racism simply isn’t what it used to be. Far from being dangerous rebels, we instead find yet another tribe of “lost penguins“; radical political orphans without a party or a patronage machine willing to take care of them, and with no will or ability to build one on their own. To understand why, we must turn to a very modern fairy-tale: the tale of the legendary Waffle House Valkyrie.

The “Waffle House Valkyrie” is the nickname of the protagonist of a recently viral video, depicting a late night brawl at (where else?) a Waffle House. A black woman is filmed raising her chair as if to throw it at a white woman behind the counter, who gestures mockingly as though inviting the black woman to throw the chair at her. The chair is duly thrown, and the woman behind the counter deftly and gracefully deflects it before grabbing it out of the air.

To normal people, this was just another amusing viral video. But in certain corners of the internet, it was, at least for a short while, transformed into something more. To these people, the woman in question became a “shield-maiden”, a “Valkyrie”, and an “Aryan wife”, supposedly standing up for white people against the random criminality of America’s black citizens. Like previous virally famous women on the internet — such as the Crimean prosecutor Natalia Poklonskaya — a good deal of fan art was created in a short time, as well as a good helping of memes.

To take an example, the British online personality Carl Benjamin (better known by his nom-de-guerre, Sargon of Akkad) reposted a picture of the Waffle House employee with glowing eyes and the caption “Stand alone if you must, but you must stand”. The subtext here isn’t particularly subtle, and many of the comments made explicit what Benjamin himself only alluded to — this was an example of White America finally taking a stand against its unruly minorities. Finally, the white man (or woman, as the case happened to be) was fighting back.

All this hype lasted until the star of the show — the Valkyrie herself — posted a video in which she told her side of what had happened that night. At this point, everything started going wrong. The woman in question spoke like a member of southern Louisiana’s lowly white working class. Enthusiasm turned into disgust, and even in some cases rage. When people found out the woman had a black boyfriend, the jig was up, and it became open season for everyone who wanted to vent their hatred for the “ghetto trash”, “garbage”, “hoodrats”, and “negroidified whites”. “Millions must die”, one anonymous account quipped, and those “millions” of people whose lives would be snuffed out to set America straight again would include many or most white people, for they were simply too far gone to be saved.

The parasocial attachment of an online “movement” to this clip, hailing a woman as a saviour for the white race before viciously turning on her, is telling — because we in the West have been here before. The most famous example of this cultural and political whiplash occurred on election night in Britain in late 2019. After the British working class rejected the Labour Party and the “Marxist” radicals who had come to set large parts of its agenda, social media was filled with the exact same hatred towards the very people whom the haters were ostensibly there to “defend”. Many who had earlier professed a deep respect for “the working class” spent the election night viciously denouncing those workers as “gammon”, “racists”, “ignorant”, and of being “ungrateful” in not understanding that these radicals were only trying to help them. 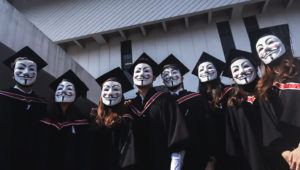 The return of class war

While the people around Jeremy Corbyn formed something like an actual political movement, by contrast, the American “white nationalist” or “dissident Right” sphere describes an entirely online phenomenon, one that is mostly in the business of selling podcast subscriptions and dietary supplements. And yet, the problem facing the white nationalist or “racist” Right is the same as the one recently faced by the “pro-working class” or “communist” Left. It’s not just that there’s not a whole lot of real-world buy-in for the belief system being sold, though this is of course true. The deeper issue has to do with the sellers, not the reluctant buyers, of the radical ideology on offer. The radicals on the Right, just as the radicals on the Left, consist almost entirely of deeply dissatisfied people who stayed in education and “did everything right”, but for whom success has never materialised.

Ever since identity politics took over Western campuses, there has been a brisk trade in think-pieces by stodgy conservative thinkers warning of a coming (white) “backlash” that would have potentially very destructive effects for marginalised people and minorities of all kinds. Well, the backlash is actually here, and it is indeed far less threatening than people made it out to be. Expectations of campus politics generating some sort of broad-based mass movement — of ordinary whites goose-stepping in tandem through the main streets of Anytown, USA — turned out to be widely off the mark. Instead, the backlash to self-absorbed middle-class identity politics turned out to be simply another kind of self-absorbed middle-class identity politics, perpetrated by the losers of the former, while retaining more or less the exact same form and syntax. And why shouldn’t it? The true losers of mainstream identity politics and the perpetrators of this kind of politics on the prestige campuses of Western universities have much, much more in common than either side would like to admit.

Identity politics has jokingly been called “oppression Olympics”, as various identity and affinity groups desperately try to upstage each other in order to win favour (and institutional representation, government money, and NGO sinecures). They have to compete, because the job and housing markets for graduates and soi-disant “elites” are now so terrible that the world increasingly resembles a game of musical chairs: for one person to prosper, another one has to be deprived. Here, the dissident Right’s response has mostly been to form their own Olympic team of professional grievance-mongers; using everything from racial IQ statistics to crime rates to historical examples such as the slave revolt on Haiti to prove that Whites (which they now usually capitalise, mirroring the mainstream preoccupation with capitalising the word Black) are indeed the most put-upon and victimised people on this earth. The future of politics is here, in other words, and it looks an awful lot like yesterday. One should not bend the stick too far when arguing that the new online dissident Right is almost a carbon copy of the now defunct populist Left. While the ideology, the tenor, and the class background of these two movements is almost identical, the dissident Right is by all accounts a far feebler political force with no place to call home.

During at least a short period, the populist Left was in control of large parts of the Labour Party, and were a credible threat to the neoliberal establishment in the US through candidate Bernie Sanders. By contrast, the dissident Right controls no parts of any party apparatus, and in many ways directly opposes the direction of the Republican Party, to which they are in theory supposed to be affiliated. A term such as the “multiracial working class” being the future of the GOP is not the product of some self-styled Marxist pundit, but rather of Steve Bannon. That this term is complete anathema to the wishes of the dissident online Right, who by and large despise any mention of a solidaristic politics that doesn’t explicitly favour them, has in no way prevented it from being further popularised by influential senators such as Josh Hawley and Marco Rubio. It has also been adopted by institutions and publications with far more clout and access to the halls of power than the rag-tag band of people who (at least for a short moment) found an inspiring example of an “Aryan shield-maiden” behind the counter at a Louisiana Waffle House.

After the spectacle of communists who hate and fear the workers, we now are treated with another spectacle: white nationalists who openly fear and loathe a plurality or even a majority of their fellow white countrymen. And though it is droll to say that history repeats itself first as tragedy and then as farce, political observers will come to agree that this latest generation of dissident radicals presents a far greater source of humour than it does an actual political threat. Nobody needs them politically or economically, and indeed nobody is offering to step up to take care of them or help them even as they suffer — this is the plight of the modern radical today.