When Anthony Trollope submitted the manuscript of Barchester Towers, the publishers rejected it as over-the-top. They thought the Church of England couldn’t possibly behave in this kind of way. Bless. They did and they still do.

Now I have to be slightly careful about what I’m about to write. Because it turns out that the Bishop of Oxford is rather thin-skinned and liable to pick up the phone to his lawyers when challenged — as the author of the Archbishop Cranmer blog discovered this week. The matter at hand was the pastoral support given — or rather, not given — by the Bishop to the Dean of his Cathedral over the last few tumultuous years.

Cranmer’s offence was to repeat words that had already been printed in The Times, and had already been spoken by the Dean, Martyn Percy: “I was despairing, because I felt that actually you would want your bishop to be a person of courage and integrity, somebody who might actually stand up against, pardon the expression, the forces of darkness and oppression, and he just colluded with them.”

Well, the Bishop didn’t pardon the expression and called in his lawyers against the Cranmer blog — though not against The Times. He decided to pick on the little guy, which is not a good look. And the bad blood between the Bishop and the now-former Dean has reached Trollopian proportions, complete with a colourful cast of poisonous featherbedded Dons and warring clerics, all weaponised by expensive lawyers and incompetent PR companies.

When the dons of Christ Church College chose Martyn Percy to be their Dean — uniquely, the boss of both the college and the cathedral — they knew they were taking a bit of a punt. Unlike his predecessors, Percy wasn’t the clubbable type. He wasn’t proper public-school, nor Oxbridge, nor ex-military (like his predecessor). He probably used his fork the wrong way up to eat his peas.

They thought they were being a bit edgy by appointing him. But they also thought they could control him. After all, everyone comes to worship those honey-coloured stones in the end. The privilege is so seductive; they all give in to it eventually. Except, Percy didn’t. And they despised him for it. “[Think] of the Morse episode we could make when his wrinkly body is found,” one of the dons wrote in an email to colleagues. 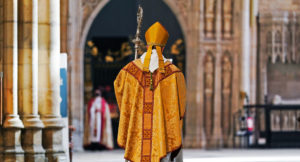 Have I abandoned my flock?

This sorry tale all started with a stabbing, when a student attacked her boyfriend while drunk. At the time, Percy was the only person in the college able to respond appropriately. In other words, the college was woefully ill-prepared for pastoral emergencies. It was obvious that things needed to change. And not just pastorally: the pay structure was all wrong, too. So Percy became a hated reformer, a moderniser.

The campaign to oust him was long and expensive, even for a college with deep pockets such as Christ Church. Because according to the statutes of the college, the only way they could get rid of him was to expose his “immoral, scandalous or disgraceful conduct”. So if that’s what it took, that’s the sort of evidence the dons would need to find. And set about finding it they did.

Again and again, they charged him with one form of misconduct or another; 27 charges in the first instance. But when a high court judge came in to adjudicate the matter, Percy was fully cleared. But that was just the start of it. New charges were discovered. He was reported to the police. They investigated and concluded there was no case to answer. Then he was reported for touching someone’s hair. Christ Church were trying to paint Percy as a sex pest. Again the police dismissed the case and another high court judge deemed that it would be “entirely disproportionate that this matter should be referred to a tribunal”.

Christ Church paid millions of pounds to try and trap Percy — and then had to pay him £1.4 million in settlement to leave. By that time, Percy resembled a shadow of his former self — thin and gaunt, he looked like a hunted man. Finally, this week, Percy quit the Church of England. “It’s an unsafe place to work,” he concluded.

Part of his reason for quitting was the lack of support shown to him by his Bishop — the one with the trigger-happy lawyers. Even when charges were dropped against Percy, the bishop refused to give him a licence. “He would not even allow me to preach at my own farewell service,” Percy said. God save us from trendy vicars

So what has gone wrong? The Church recently advertised for a new director of safeguarding, the fourth in four years. The job is impossible: on the one hand, the church has harboured abusers for too long, moving them on to other jobs when their abuse is discovered. On the other, it conducts campaigns against long dead clerics, unable to defend themselves — such as the former Bishop of Chichester, George Bell, who died in 1958. And now we are all suspects.

This sort of thing has happened to me more than once. A car window winds down. A random man shouts out at me from the other side of the road. “Paedo!” he screams, his voice tailing off into a cackle. He doesn’t know me from Adam. But I am wearing a clerical collar. I don’t often wear one these days and this is partly why.

The clerical abuse of children and vulnerable adults is such a grotesque crime I feel like echoing Jesus when he said of abusers: “it would be better for him to have a large millstone hung around his neck and to be drowned in the depths of the sea.” But precisely because of the visceral nature of our repugnance of such crimes, it is easy for emotions to swamp good judgment or simple justice. The accusation is often enough for guilt to be presumed. Guilty until proven innocent. And proving a negative is often impossible.

Reputations sometimes never recover. One clergyman, Fr Alan Griffin, took his own life in 2020 because of a whispering campaign that he was a child abuser — yet, as the coroner admitted, these claims were “supported by no complainant, no witnesses and no accuser”.

Of course, there certainly has been abuse within the church. Rev. John Smyth was accused of the most horrific beatings of teenage boys in his care on Christian holiday camps. Before being prosecuted, he left England for Zimbabwe, where he was arrested after a naked body of a teenage boy was discovered in his swimming pool. A few years ago, the Church of England commissioned an independent report into the clerical abuse of children. 390 clergy were convicted of such abuse between the Forties and 2018. I don’t know if this makes us clergy greater abusers of children than postmen or accountants or teachers. But clergy are supposed to serve a higher calling; even one such example is one too many. Is Boris Johnson really a Catholic?

But precisely because of the intense emotions that such terrible crimes create in us, it is not hard to appreciate how safeguarding can sometimes over-reach, creating a culture of fear and distrust within an organisation that can make those within it feel “unsafe”. I have never been accused of wrongdoing, but I have changed my behaviour with parishioners. What used to be called “child protection” transmuted into “safeguarding” some years ago, and now protects all who are vulnerable. So now I always leave the door open when I am talking to someone in my study. I prefer to go for a walk with vulnerable people — a category that now includes the bereaved and those seeking any sort of help — rather than see them in the church. The shepherd has become afraid of his flock.

The whole thing has become an unholy mess. There is no fully independent head of safeguarding in the church. Ultimately, it’s for the Bishops to sort out. But they are also supposed to be the pastors to the clergy, and they cannot be the both prosecutor and defence and pastoral support. As Percy put it: “in the face of partisanship, failure to manage conflicts of interest, double standards and incompetence in the CofE’s safeguarding, I finally took a decision: to leave the church”.

The campaign against Percy began because he raised the whole question of safeguarding at Christ Church. The dons then reached for safeguarding as a way of getting rid of him, requisitioning it for persecutory purposes. They may call it safeguarding. But it’s hardly surprising that so few of us feel safe.