The date 1619 does not appear in the introduction to African Founders: How Enslaved People Expanded American Ideals, Pulitzer-Prize-winning historian David Hackett Fischer’s encyclopaedic, magisterial new book. But the controversial project that takes that date as its name — launched first as a special issue of The New York Times magazine in 2019 to mark 400 years since the first slaves arrived at Jamestown, fronted by the journalist Nikole Hannah-Jones and now adapted into a bestselling book and nationwide classroom curricula — is the elephant in the room as he ambitiously documents the contributions to the Republic of African Americans in the 17th, 18th and 19th centuries.

Hackett Fischer, a professor of History at Brandeis University, notes that “with many important exceptions, the tone of much American historical writing turned deeply negative during the early 21st century. It remained so as these words were written, in 2021.” He complains of demands for political correctness on campus and laments a public discourse in which “we have seen a growing disregard for truth, and a cultivated carelessness of fact and evidence”. He argues that “ancient ideas of open inquiry and empirical truth have gained a new importance, in part because of hostile assaults upon them from many directions.”

African Founders has been years in the making. “My substantive work on this project had its beginning in 1955,” writes Hackett Fischer, 86, in the book’s acknowledgments. But, with the history wars raging, it arrives in the nick of time.

To set the scene, briefly, the 1619 Project aims to “reframe the country’s history, understanding 1619 as our true founding, and placing the consequences of slavery and the contributions of Black Americans at the very centre of our national narrative.” Since it was launched, 1619 has been rebutted and debunked by American historians of comparable or even higher standing than Hackett Fischer (a very select group). Among those who have pointed out its many distortions, lies and inaccuracies is Gordon S. Wood, perhaps America’s greatest living historian, who has said he was surprised the project “could be so wrong in so many ways”. When another esteemed historian, Leslie M. Harris, expressed her reservations about one of 1619’s core claims — that the American Revolution was fought in large part to preserve slavery in North America — to a New York Times fact-checker, she was ignored.

Since publication, The New York Times has stealthily edited contentious passages while Hannah-Jones seems to spend most of her time arguing on Twitter, accusing her critics of being old white dudes who Just Don’t Get It. In one swiftly deleted tweet, she appeared to revel in the idea that the violent eruptions of the summer of 2020 be called “the 1619 riots”. None of these problems with the 1619 Project as a work have dampened its impact on American public life.

This is the fraught landscape into which African Founders arrives. A few asides in the introduction notwithstanding, Hackett Fischer’s rebuttal to the vogue for deeply pessimistic history is quieter and less direct than that of many of his colleagues. But that makes it all the more persuasive. African Founders is a devastating counter-example: a thorough, compelling work free from the didacticism of both 1619 and conservative attempts to set the record straight, such as the 1776 commission launched by Donald Trump in 2020.

African Founders is a successor to Hackett Fischer’s most lauded work, Albion’s Seed. Published in 1989, it described how settlers from different parts of the British Isles imported a range of enduring “folkways” — culture, religion, language, ethics and so on — to different parts of what would become the United States: East Anglican puritans in New England, southern gentry in Virginia, Quakers from Wales and the Midlands in Pennsylvania, and Scots-Irish border folk in Appalachia. (The enthusiasm of the descendants of that final group for Donald Trump caused many pundits to dust off their copies of Albion’s Seed after 2016.)  Taking the same regional approach, African Founders charts the migrations, cultures and political and social contributions of slaves, freed slaves and their descendants throughout America.

It is hard to overstate the scope of this 900-page work. Open it at random and you will find subheadings such as “How African School Children In Philadelphia taught Benjamin Franklin A Lesson About Race” and “Diversity of African Traditions Among Afro-Texan Cowhands”. Breaking up the demographic, social and political big picture are stories of many African Americans whose tireless work didn’t just win freedom for themselves but helped to expand the very notion of American liberty.

Many of the most pre-eminent such heroes came from Chesapeake Virginia and Maryland, foremost among them Harriet Tubman and Frederick Douglass. Hackett Fischer argues that this was no coincidence. The prominence of men from the region in the founding of the United States — George Washington and Thomas Jefferson being the two most obvious examples — left a lasting impression on a later generation of slaves-turned-leaders: “These former Chesapeake built on a regional tradition of leadership, and reached beyond it in creative ways. They learned from its strengths, corrected its weaknesses, and invented other new ways of leading from their own heritage and experience.” The trial of America’s progressive prosecutors

Hackett Fischer spotlights less well-known figures too. Juan Rodriguez, for example, was an enterprising “black mulatto” who became the first documented non-native settler on Manhattan: he liked the look of the island and blagged his way off a Dutch merchant ship in 1613. Rodriguez fought for his freedom, fended off an attempted enslavement, married an Indian wife, became a successful trader and a translator and go-between for the Dutch and American Indians. Several scholars have called him “Manhattan’s first merchant”.

In New England, the enslaved poet Phillis Wheatly, named for the ship on which she was brought to Boston in 1761, confounded racist expectations and won praise for verse that Hackett Fischer calls “a large-spirited celebration of a common spirit in all people everywhere”. As well as the racism she encountered in her own time, Wheatly would later be criticised by black nationalists, who weren’t especially keen on her short poem “On being Brought from Africa to America”: “’Twas mercy brought me from my Pagan land/Taught my benighted soul to understand”. Hackett Fischer notes the irony in the similarities between the black nationalist critiques and the contemporary racist criticism, including from Thomas Jefferson.

Hackett Fischer is clear that none of this should detract from the cruelty of slavery or the racist violence that followed. His book is full of terrifying detail of the lives of slaves across America, including detailed accounts of how those experiences varied over time and geography. But he understands that lingering on the horrors of slavery only get you so far in understanding America’s past.

The story told by Hackett Fischer stands in stark contrast to the demotivating, almost paralysing lesson of the 1619 Project: slavery not as America’s original sin but something hardwired into its DNA, a past that cannot be escaped. It is a dispiritingly static view of the country. Rather than displaying a curiosity at the paradox that has animated so much American history — “How is it,” asked Dr Johnson in 1775, “that we hear the loudest yelps for liberty among the drivers of Negroes?” — the 1619 approach dogmatically sweeps aside everything other than the existence of slavery as minor details in the story of the United States. 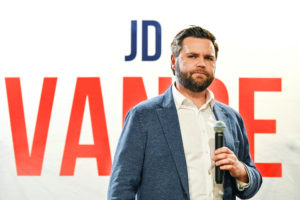 The conversion of JD Vance

African Founders, by contrast, demonstrates that there doesn’t need to be a trade-off between “centring” the experience and stories of black Americans and an appreciation of the gift of American liberty. Indeed, the takeaway from Hackett Fischer’s work is that the latter cannot be achieved without the former.

“What if we told a story that centred slavery and Black Americans and, well, no one read it,” writes Nikole Hannah-Jones in the introduction to The 1619 Project: A New Origin Story, remembering her fretting on the eve of The New York Times magazine special edition. She needn’t have worried. It was an overnight sensation. Indeed, measured by impact on the public conversation, rather than merit, the 1619 Project is a more successful contemporary work of opinion journalism or pop history than any other in recent history.

African Founders, by contrast, feels like a book out of time. Inconveniently heavy and equivocal in the age of skinny provocations. Moderate in an era of extremes. But closer to the truth than the divisive works that hog the limelight.