A couple of decades ago, I spent a week trying to commute on the London Underground without looking at the adverts in tunnels or on the carriages.

At the time a committed anti-capitalist, I experienced the ever more intrusive presence of advertising in the built environment as an unacceptable invasion. It felt like being tapped on the shoulder every three seconds by annoying canvassers while enjoying a quiet ciggie break.

So I set out to see if it was possible to ignore them. It was, it turned out, difficult: advertisers spend a great deal of money on being attention-grabbing, and it took a huge mental effort to tune out all that expensive effort to snag my awareness.

The “attention economy” was first theorised by the economist Herbert Simon in 1971: he called attention to the “bottleneck of human thought” and argued that in a world where this was a scarce resource, the smart money focused on grabbing a slice of it. After all, you can have the best product in the world but if no one has noticed you exist, you’ll still sink without trace. An immense amount of lucrative time and effort goes into the arms race for attention, and the results — not just on the Tube — are often eye-watering.

If it was difficult to swim against the commercial messaging tide two decades ago, it’s even harder now. When I did my Tube experiment, averting my eyes from the tsunami of paid-for messaging became exhausting after a few days. After a while, it was easier just to give in and swim on the tide of people trying to tell me what to buy. And today, the experiment would be harder still, with adverts covering every available surface and sometimes moving as well.

Over the same period, too, something equivalent has happened to the whole media universe. A vast commercial and political industry has developed with the aim of grabbing the punter’s attention and persuading us to buy, say or think something or other. The boundary between PR, journalism and propaganda is blurry to say the least, and flourishes atop an immense ecosystem of opinion-havers. And there’s no outside to it, short of moving to an uninhabited island with no internet access and never talking to anyone.

As a result, we don’t just have an attention economy. We also have an attention politics: a byproduct of the explosion of content that came with the transition to digital culture. In that politics, what gets noticed isn’t just a bottleneck on the way to commercial success; it’s also the gateway to political power.

In the new attention politics, older information ideals curl up and die. For the liberal framework for thinking about communication dates back to a point before the internet, when information was relatively scarce, and could be suppressed. In that context, liberals wanted to resist such suppression, arguing that “free speech”, would enable a collective search for objective truth via a “marketplace of ideas”.

Along with this came the belief that free information and lively debate carries us all toward objectively agreed truths, while religious faith and moral principles should be as much as possible a private matter. Contemporary defenders of this gestalt gather at Quillette and other such “classical liberal” outlets, ever ready to mount a defence of free speech as a bulwark against bad ideas, or the importance of debate to the scientific method.

Now, though, we all have free speech. In a digital environment, you can’t really suppress it. Ban someone, and they’ll just pop up elsewhere (or in the case of Donald Trump, start their own social media platform). Not unrelatedly, what we have is no longer a scarcity of information but a superabundance.

The problem is, you can’t really have a functioning society where anyone can say anything — or at least it won’t function for long. So a great deal of soft social effort goes into constraining free speech, while still permitting speech to be (at least nominally) free. We can all say what we like; the battleground is now what gets noticed, and by whom. What does or doesn’t make the public eye is managed by a stifling social consensus that governs what gets liked, shared or referenced; what should be boosted by algorithms; and what should make it into the respectable press. Even the original Luke Skywalker, Mark Hamill, has fallen foul of this, after committing the dastardly crime of publicly noticing a Tweet by JK Rowling.

At the same time, too, “facts” have also become visibly unstable. In some cases, they vary dramatically according to local political conditions: for example, according to US officials, “gender affirmation” for children is officially “suicide-prevention care”. Meanwhile, officials in the UK and Sweden are rowing swiftly in the opposite direction.

This sort of attention politics, the manipulation of narratives, sounds a death knell for the liberal ideal of politically neutral individuals or institutions. For confronted with an excess of competing and contradictory messaging, most sensible people don’t want to spend all their time working out what’s real. And when attention is scarce, political power accrues to those who are trusted to curate.

Most visibly, legacy media outlets now play this role: filtering the chaos of possible stories for a selection that fits (or at least doesn’t jar too sharply with) the readership’s worldview. But the facts, or stories, or data points we curate add up, cumulatively, to moral choices. If I notice the vulnerability of males who identify as women within all-male prisons, while (deliberately or not) ignoring stories that point to the vulnerability of women to males who claim to identify as women within all-female prisons, this adds up to a statement about what (or who) I think is important.

This variation in what’s emphasised (or mentioned at all) is easy to see across the national press: try toggling between New York Times universe and that of the New York Post, or between the Guardian and the Telegraph. You don’t need a media studies degree to infer the differences in moral framework that drive this differential noticing. And in any case, this isn’t an abstract game for media studies nerds. Our moral choices have real-world consequences.

Which set of “facts” is accepted by officials as true, about the right way to care for gender dysphoric children, will have significant medical consequences for youth in different jurisdictions. Or consider recent news that the state of New York is proposing to legislate for prisoners to be “presumptively placed” in accordance with their “self-attested gender identity unless the person opts out of such placement”. Set that against the list of crime reports above, and the decision to notice or not notice the link between the male sex and sex-offending adds up to a political choice that — as others have noticed — places real women at risk. 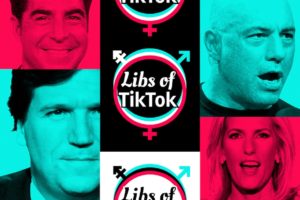 Why Libs of TikTok terrifies the media

And this is where the politics of noticing grows more contentious. For the general public aren’t mere passive bystanders. Noticing subcultures have swiftly emerged, sometimes sharply at odds with the official ones, and in which an effective curator can have real-world political impact. For example, the “Libs of TikTok” Twitter account is credited with having transformed US education debates — simply by collating video statements made by progressive teachers.

In turn, this has spawned a whole meta-industry of NGOs whose remit is to stop unofficial noticers getting out of hand. Recent years have seen a boom in “fact-checking” organisations, who aim to extend the governance of noticing out into the internet badlands, often funded by immensely wealthy philanthropists — many of whom have well-documented political agendas.

This looks variously like an attempt to defend truth from manipulation by bad actors, or else covert censorship riddled with obvious bias. But the internet abounds with people who have assembled truly outlandish narratives from their preferred data points, such as in the QAnon conspiracy. And “misinformation” isn’t just a self-serving elite story: bot farms are routinely used in information warfare, to give the appearance of mass support to overseas messaging operations.

It should come as no surprise, then, that even the US Government is now an overt player in the politics of noticing. Last week, Joe Biden launched a “Disinformation Governance Board” whose job it is to tell the rest of the English-speaking world what is or isn’t real on the internet. Predictably, though, the reaction to this body was cynical. And no wonder: for Biden’s intervention does no more to address the loss of facts, objectivity and truth-seeking driven by information superabundance, than obviously biased “fact-checking” bodies funded by progressive philanthropists. But no amount of such “governance” will stop people noticing when narratives are uplifted, deprecated, or transformed from “disinformation” to accepted fact — or prevent them wondering about the context for such shifts.

Many Americans noticed, for example, when the insalubrious contents of a laptop belonging to then-Presidential candidate Joe Biden’s son Hunter went from “Russian disinformation” to “authenticated by the Washington Post” in the time it took his father to beat Donald Trump at the polling booth. We’ll never know if burying that story swung the election. But it probably helped: an intuition that is, for many, just one more data point in the pattern of “neutrality” and “objectivity” serving as mere fig-leaves for partisan manoeuvring.

It’s common now to complain about the other side being guilty of “post-truth” politics, or to blame variously “woke tyranny” or “Right-wing authoritarianism” for the sense that truth has been replaced by something dismayingly slippery and chronically biased. But it’s a mistake to imagine that this is all the fault of whoever you consider your political enemies.

Free speech, objectivity, facts and the “marketplace of ideas” really are hopelessly compromised. But what killed them wasn’t Those Bad People Over There; it was the internet. It gave us too much information, and with it came attention politics. Now even the most die-hard defenders of political neutrality might as well lean into their own biases, because even if they don’t people will still notice them.

What we don’t know yet is how far it’s possible to go in forcing public assent to narratives that are flagrantly untrue. That’s ultimately a question of how completely a given elite is able to control the public sphere, in a hyper-mediated culture, if a critical mass of ordinary people doesn’t want to play ball. In any case, I suspect we’re on track to find out.