Around 4,000 years ago, a band of roving tribespeople, known as the Hyksos, migrated west from Mesopotamia towards the fertile floodplains of the Nile Valley. They found a region ripe for the picking. Egypt’s pharaohs, complacent after centuries of political stability, capitulated in the face of the nomads’ dynamism. The Hyskos burned cities, massacred inhabitants, enslaved survivors.

In the long-term, however, a different legacy emerged. After bloodshed, the incomers brought new ideas, and revolutionary technology. By the 1600s BCE, as Egypt’s dynastic rulers reasserted their dominion, this cross-pollination of cultures provided the impetus for a great flowering of art, imperial expansion and wealth. The treasures of Tutankhamun’s tomb are relics of what would come to be remembered as the golden years of the pharaonic age.

The little-known story of Egypt’s “shepherd kings” could in some ways be seen to represent the dual consequences of human mobility. On the one hand, the threat of upheaval. On the other, the cosmopolitanism that can lead to innovation and prosperity. Against a backdrop of climate change and migrant crises, the idea of human movement as the ultimate change-agent has come under scrutiny in a series of books, which together describe how nomadic and migratory behaviour has shaped, and will continue to shape, our world.

The history of the Hyksos is one of several chapters resuscitated in Nomads, by the travel writer Anthony Sattin. “People who live with walls and monuments, and who have written most of the history,” Sattin writes, “have failed to find meaning in or to recognise the value of the lighter, more mobile, less cluttered lives of those who live beyond borders.” Itinerant peoples tend to be misunderstood, he argues. And yet they continue to exert a hold on the urban imagination.

Mobility, Sattin regularly reminds us, is in human DNA; it is the impulse that carried our species out of Africa to populate the world. Prior to the dawn of agriculture in the Fertile Crescent 12,000 years ago, every hominid was a hunter and gatherer. Once characterised as an era of brutality, some anthropologists have since described the era preceding the dawn of agriculture as the “the original affluent society”, a prelapsarian world without hunger, hierarchy and exploitation.

Even as humanity gravitated towards sedentary life in villages, towns, and cities, there remained the holdouts — pastoralist cultures that moved with the seasons. These nomads, as Sattin’s book makes clear, have often been portrayed as romantic figures. While city life persuaded inhabitants into ever more niche specialisms, the nomads were generalists who retained the ability to survive independently, and on their own terms. In so doing, they were often seen to embody a forsaken arcadia.

One has only to consider the fetishisation of today’s nomadic cultures — captured, for example, in the idealised photographic portraits in Jimmy Nelson’s controversial 2013 book, Before They Pass Away — to see how this fascination persists today.

But persistent, too, has been the conflation of rootlessness with unsophistication, even savagery. With settlements came walls, and their corollary, paranoia. To persevere with roaming ways in the sedentary age has often been perceived as a cause for suspicion. I can’t escape my eco-anxiety

Reading Sattin’s book, one becomes aware that the ensuing conflict, both physical and ethical, has simmered uninterrupted through the centuries. The biblical story of Cain, the farmer, murdering his herder brother Abel is often interpreted as an allegory for an ancient anxiety: that it was the nomad, living not in defiance of nature but in harmony with it, who retained God’s favour. Sattin’s primary geographical focus is the steppelands of Eurasia, where different nomadic tribes have for centuries contended “for pasturage and bounty”, and history was punctuated by the ravaging conquests of the Scythians and Mongols.

Yet still, in between, there were moments of productive collaboration between city-dweller and nomad: the Hyksos’ bequest to Egyptian culture, the pax Mongolica, the Silk Road. With the world now ordered into sedentary nation states, and traditional nomadism relegated to a footnote, the legacy of these ancient dynamics endures in the battle of ideas, in our attitudes towards people on the move.

Today, of course, concepts of nomadism have been reshaped by more modern phenomena. In The New Nomads, published last year, French writer, and self-described “recovering globalist” Felix Marquardt expands his definition to encompass the migrant, the refugee, and the affluent citizen of nowhere. The stories he includes in his compendium are selected to convey the mutual benefits for both migrant and recipient country that can prevail when migration works. It opens with the story of a Malian immigrant who finds work, and a surprising welcome, on a Christian Trump-voter’s cattle ranch in Montana. Cumulatively, these testimonies embody Marquardt’s belief in migration as a virtuous cycle: for the migrant, opportunity; for the host-country, enrichment both cultural and economic. “It is so often the case that immigrants are entrepreneurs, go-getters, hustlers,” Marquardt writes.

What all these anecdotes of successful immigrant assimilation also emphasise, however, is the central paradox in host-migrant relations, which is that hostility towards incomers tends to prevail most virulently in the abstract. The object of anti-migrant feelings is seldom the nice waiter serving your coffee, but the anonymous hordes in the newspapers. Suspicion of outsiders tends to be fiercest in places where there are hardly any immigrants at all. One of the more incisive aspects of Marquardt’s assessment is his conviction that this age-old schism has been deepened, in no small part, by political animus. A former PR consultant who used to organise exclusive networking events for technocratic elites, Marquardt understands how a “predictable globalist ode to mobility” chafes against ideas of national selfhood and sovereignty. The enthusiasm of the Davos set for free movement emanates from a cohort who, through their wealth, insulate themselves from its complexities. Marquardt criticises “the aloof, idealised take on migration of many liberals”, saving especial scorn for this elite’s own outrider, the “digital nomad”, for whom mobility is first and foremost a status symbol. “Rootless, they have forgotten that nomadism has always been a lifestyle rooted in the pasture: in locality not just in motion.” The new nomads may emulate their traditional counterparts in terms of geographical mobility. But in terms of the selfhood, and collective identity that their respective lifestyles engender, the two are poles apart.

The anti-migrant backlash is in part a response to this hypocrisy. Marquardt’s unconvincing solution seems to be that more immigration, rather than less, will eventually persuade societies of its myriad advantages. Young immigrants, with their drive and nomadic wisdom, will “become the vectors and creators of a more grounded, global ethic”. This wishful prescription, alongside Marquardt’s reluctance to acknowledge the social and economic issues that can arise when migration is mismanaged — ghettoisation, cultural tensions and wage suppression — makes his rhetoric feel like the same Bo-bo parlour talk he earlier critiques.

According to Gaia Vince, the author of Nomad Century, the work of resolving such issues has never been more urgent. Anyone who agrees with our Home Secretary that 40,000 people crossing the Channel on small boats in a year constitutes “an invasion”, prepare yourself. For Vince, nomadism, living without borders, is neither a premodern anachronism nor a bourgeois fad. It is essential if humanity is to survive.

Her book opens with a stark summary of the climatic changes that will precipitate unprecedented mass displacements between now and the end of the century. In Vince’s analysis, paradigm shifts in hydrology and topography are set to create a broadening equatorial belt of intolerable heat and aridity. This “Dustbowl world”, she claims, is set to uproot 3.5 billion people. And it’s not just climate change: other factors, not least the growing demographic imbalance of many developed countries, inform her prediction that “cities from Munich to Buffalo will begin to compete with each other to attract migrants”. Even the most stubborn climate change sceptic should be able to see this book as a thought-experiment, a worst-case prophecy that asks two fascinating questions. If Vince’s terrifying future comes to pass, what would a “good Anthropocene” look like? And is society capable of making it so?

The first of these requires some head-scrambling terraforming. Think of Greenland megacities, audacious geoengineering technologies, and supranational cooperation on a hitherto unimagined scale. What is striking, aside from the sheer radicalness of the vision, is how much of this manifesto is within our ken. Many of the necessary innovations that Vince enumerates, from 3D printed houses and lab-grown meats to subterranean stormwater sponges and the transformative potential of geothermal power, are already in the realms of the possible.

An unprecedented upheaval needn’t spell complete catastrophe, then. Indeed, Vince subscribes to the economic school of thought which contends that the dissolution of borders would lead to a doubling of global GDP, and the elimination of global poverty. But it’s hard to buy Vince’s argument that we have the cognitive flexibility or political wherewithal to bring this vision into being. Vince recognises this. “Challenging, though, will be the task of overcoming… the idea that we belong to a particular land and that it belongs to us.”

Vince’s cri de coeur echoes a sentiment shared by Sattin and Marquardt. Migration, she argues, is an innate feature of the human condition. In biological terms, the DNA differences between European and African are infinitesimal. In anthropological terms, nationhood, and the sedentary foundations of modern identity, are new constructs that we can relinquish. “We are trapped in the socio-political-economic web that we’ve woven,” Vince writes. The Covid pandemic is cited as an example of how large populations are able to stomach radical social change if the reasons for doing so are critical. 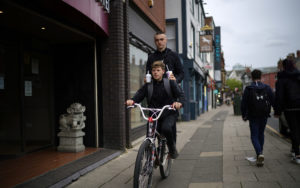 But however deft the dismantling of their foundations, the idea that our prejudicial reflexes could be switched off at the very moment that billions of climate refugees are being pushed north of the 45th parallel seems hopelessly optimistic. Countries in continental Europe, Vince acknowledges, have recently been “testing a ‘sound cannon’ to be used against refugees as part of a €37 million border control programme”.

There are moments, reading Vince, where you encounter prospective geopolitical Gordian knots that turn the stomach. “Russia, which is already the world’s biggest exporter of wheat, will see its agricultural dominance grow as its climate improves,” she writes. And that is before you even get into the minutiae of persuading populations raised on beef that maggots are an excellent source of protein.

If this tour of nomadism’s past, present and future teaches us anything it is the strength of the covenant we made when humans first staked out a piece of ground. We live in an age in which the follies and drawbacks of the settled age have never been so apparent. But we are too wedded to our borders to go back. What remains of our nomadic instincts may, in coming decades, be harnessed only to corral us into the mega-cities of a dystopian future. With the disappearance of traditional nomadism comes the acknowledgement that we are now all children of Cain.

It is in this context that the tension between the rootless and the rooted is only likely to grow. Resolving that tension is likely to be less a feat of ingenuity than of imagination.